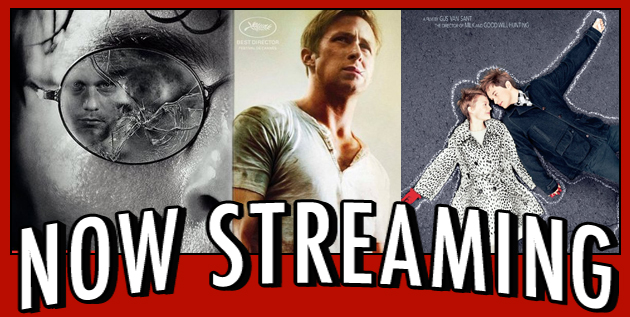 Each week within this column we strive to pair the latest in theatrical releases to the worthwhile titles currently available on Netflix Instant Watch. This week we look at alternatives to Straw Dogs, Drive and Restless.

In theaters Friday, two dark tales with dashing men and devastating violence face off against a lyrical and bittersweet romance by indie director Gus Van Sant. And if you want to take the pulse-pounding, heartwarming/breaking action home, we’ve got you covered with some prime picks from Netflix.

A remake of Sam Peckinpah’s controversial 1971 thriller, Straw Dogs centers on a city-slicker screenwriter (James Marsden) who moves with his wife (Kate Bosworth) to her rural Southern hometown, where her old flame (Alexander Skarsgård) still burns for her, resulting in a rivalry that soon turns violent. Sometimes the most harrowing tales are not ones about maniacs, but rather are stories of normal people driven to merciless extremes. Here are three thrillers that embrace the dark side of mankind:

Law Abiding Citizen (2009) A family man (Gerard Butler) turns mad murderer after his wife and child are slaughtered. Seeking the vengeance the criminal justice system failed to proffer, he goes on a meticulously planned killing spree that terrifies the hot-shot prosecutor who is his ultimate target (Jamie Foxx). Viola Davis and Leslie Bibb co-star.

Eye for an Eye (1996) Sally Field stars in John Schlesinger’s shocking revenge drama, which follows Karen McCann, a grieving mother whose teen daughter was raped and murdered by unrepentant thug Robert Doob (Kiefer Sutherland). When the justice system fails to convict Doob for his brutal crimes, McCann begins stalking him and plotting her own brand of motherly love curdled vengeance.

Irreversible (2002) Controversial Argentinian filmmaker Gaspar Noé first drew notice Stateside for this horrifically violent thriller, whose inciting incident is a graphic and painfully long rape scene. This nihilistic drama follows Marcus (Vincent Cassel) and Pierre (Albert Dupontel), two romantic rivals seeking the love of Alex (Monica Belluci), who are spurned into blind vengeance when she is raped and beaten into a coma. What unfolds is a tale that is as gritty as it is bleak. Fair warning: this is a film you won’t soon forget and can’t unsee.

Ryan Gosling stars in this violent thriller about a stuntman who moonlights as a getaway driver. Carey Mulligan co-stars; Nicolas Winding Refn directs. {Check out our interview with Drive co-star Christina Hendricks here.} You like your thrillers black as coal and violent as hell? We got you.

Bronson (2008) Before he was scene-stealing in Inception, Tom Hardy (soon-to-be Bane in The Dark Knight Rises) drew notice for his gritty and bold portrayal of real-life ruffian Michael Peterson (a.k.a. Charles Bronson), whose short fuse and love for violence made him Britain’s most-notorious prisoner. Drive director Refn crafts something wildly kinetic and deeply bizarre in this wild biopic.

Oldboy (2003) For violent and twisted tales, it’s hard to beat Korean revenge flicks. Perhaps the most notorious, Chan-wook Park’s Old Boy follows the journey of a man (Min-sik Choi) who is kidnapped and isolated in a strange hotel for 15 years with no explanation. Upon his abrupt release, he begins to seek answers and revenge. Grungy and captivating, Old Boy is best-remembered for its jaw-dropping final moments.

Ichi the Killer (2001) But of course if you want something thoroughly dark and cringe-inducing, you should look to Japanese filmmaker Takashi Miike. In his adaptation of the Manga Koroshiya 1, Miike explores extreme violence and gangland retribution through the tale of scarred and blond Yakuza member. It’s sick, sadistic and unshakeable.

Henry Hopper (son of screen legend Dennis Hopper) makes his film debut in this elegiac tale of teen romance. Enoch Brae is a funeral-crashing orphan with a ghost bff who meets an enigmatic ingénue (Mia Wasikowska) and discovers the joys and pains of first love. Gus Van Sant directs. For more tales of bittersweet romance, take in these moving motion pictures:

Good Will Hunting (1997) Gus Van Sant directs this gutsy drama that made Matt Damon and Ben Affleck (who won Oscars for their co-written script) household names. Here Damon stars as a blue-collared man who hides a heart of gold and a brilliant mind behind his barbed sense of humor. But when Will meets a Harvard girl with a big smile (Minnie Driver), he begins to rethink his rough exterior. Robin Williams scored Oscar gold for his performance as the Southie psychiatrist who befriends the troubled genius, but Damon’s performance here feels like catching lightning in a bottle as he creates a character that is dark, complex yet unfailingly crush-worthy.

The Graduate (1967) Like Restless, Mike Nichols’ Graduate centers on a lost young man suffering from ennui whose life is forever altered by an unexpected romance. Of course here it’s no nostalgic teen love with a virginal ingénue. Instead, in this pitch-black comedy a recent college grad (Dustin Hoffman) is seduced by a sultry cougar (Anne Bancroft). Then things go from awkward to incestuous when he begins to fall for her teen daughter. Katharine Ross co-stars.

Harold and Maude (1971) Restless owes a lot to this cult-adored Hal Ashby comedy, in which a death-obsessed young man (Bud Cort) falls for a chipper septuagenarian (Ruth Gordon) to whom death is not a curious fascination, but a fast approaching reality. Deeply quirky, dark and semi-sweet, this is one of those flicks you may have missed that totally deserves your attention. After the Wedding (2006) Nothing is what it seems in this Danish drama helmed by Oscar-winning director Susanne Bier. Mads Mikkelsen (Casino Royale) heads up the ensemble cast as Jacob Pederson, an India-based aid worker who must return to his native Denmark to secure a crucial donation that will keep his orphanage afloat. But once he meets the eccentric and affluent philanthropist who controls his fate, he is forced to attend a wedding and confront some long-forgotten skeletons in his closet. While this intentionally vague description may sound like the setup for yet another twisted tale of revenge, what After the Wedding offers is something far more unique and gripping. But to tell you any more would be a disservice to this captivating, bold and emotional tale that is told with the taut tension of a thriller. Just watch it. Now.