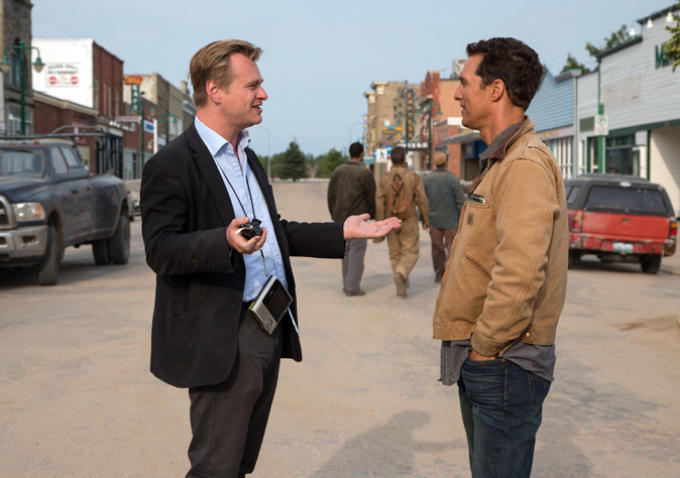 You don’t hear the word “subtle” tossed around much in discussions of Christopher Nolan’s Interstellar, but here’s something I found quite nuanced about its first hour: The sly hint of a smile that creeps on Cooper’s (Matthew McConaughey) face whenever he discusses the idea of going off into space. For all his insistence that he has a family he needs to care for, Coop can’t help but grin – ever so slightly – when Professor Brand (Michael Caine) tells him that he’s the right man for a daring new space mission. And watch his eyes as he tries later to justify leaving to his distraught daughter Murph: “They chose me, Murph,” he says, and he seems to be beaming – more a proud child than a regretful father.

On a related note, watch Christopher Nolan dissect a scene from Interstellar:

At In Contention, Kris Tapley delivers his top 10 shots of the year:

Paul Thomas Anderson, for reasons laid out in the quote above, has traded on long takes packed with organic moments since day one. As he evolves as a filmmaker, that tendency evolves, too. And while this particular shot feels like a PTA throwback, it has a fresh and electric quality, letting the viewer observe thick drama play out. It’s fully dependent on the actors nailing the moment, and particularly Katherine Waterston, who in this six-minute take wallows in femme fatale intrigue while revealing so much about her character’s, Joaquin Phoenix’s and their relationship. It’s a seduction crammed with layers.

Art of the Title on the 10 best titles sequences of the year:

Travel to the underbelly of America. Louisiana. The Gulf Coast. Purgatory, USA. A sopping, poisoned wasteland where industry and old time religion meet somewhere in the sugarcane. This is a place haunted by people — good and bad and everything in between — fractured souls who cling to the edges of society and themselves, walking contradictions struggling to get by and simply be. It’s here that two detectives — a broken stranger and a slightly bent local — get wind of something sinister. Among the roach motels and refineries, a serial killer plies his terrible trade against the put-upon: Murder as ritual sacrifice. The cane is burning in the field. The fire eats it all away.

Beautiful, tonally perfect, and combining design techniques in a way that TV titles haven’t done before, Elastic’s affecting titles for HBO’s True Detective make one hell of a case.