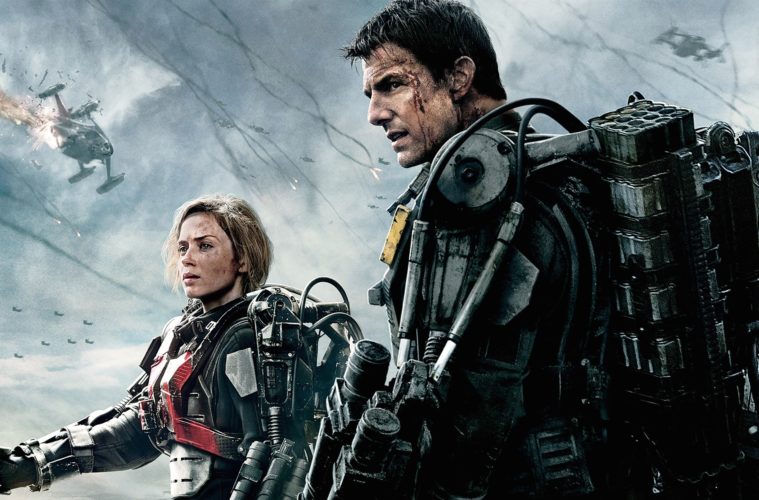 The hurdles in making a film with a single actor, virtually no dialogue and, while you’re at it, also setting action in the middle of the ocean sounds like a daunting, if not impossible feat for a filmmaker to successfully accomplish. Yet, miraculously, All Is Lost, the second feature film fromMargin Call director J.C. Candor, is an uncommonly effective piece that acts as a complete reversal from his previous feature. Starring the timeless Robert Redford as a nameless man — in what might be a pinnacle performance that he could happily retire after — the film rests entirely on his shoulders, and he carries it with grace and class. Moreover, the nuanced details in his performance anchor All Is Lost without exaggerating the direness of his own predicament. – Raffi A. (full review) Edge of Tomorrow, Tom Cruise’s latest summer action vehicle, fits nicely into the group of recent blockbusters concerned with altering a distant past. Like X-Men: Days of Future Past or Godzilla, Edge of Tomorrow is also adapted from existing material, this time a Japanese science-fiction novel titled All You Need Is Kill. Created by Hiroshi Sakurazaka, it’s the backbone for director Doug Liman’s tent-pole about an unfortunate military major trapped in a perpetual time loop. Cruise has crafted a body of work consisting of drastic and bold characters; he has taken his star persona and flirted with physical and emotional recklessness to craft memorable moments in films as diverse as Magnolia and Mission Impossible: Ghost Protocol. These characteristics are notably absent at the start of Edge of Tomorrow, as Cruise plays Major William Cage, a figurehead used to sell a war to the public against an invading alien species. – Zade C. (full review) A movie not being exactly what you expect can lead to a certain kind of emptiness or hollowness once everything is said and done. When you walk into any situation desiring one thing and then leave having gotten something else entirely, it takes a moment for your mind to adjust to the shift. There may be disappointment at the bottom of your experience, a foundation laid by the apparent bait-and-switch you just went through, but does that mean that the experience was a net negative? After all, the thing you received might be objectively perfect in its own right, outside of your expectations.
These are the kinds of questions one might have to ask oneself after watching Filth. – Brian R. (full review)

God’s Pocket, the feature directorial debut of Mad Men’s John Slattery, is a dark comedy determined to paint a distinct picture of small life in a very particular kind of town. It’s place full of colorful characters but lacking in a particularly interesting tale to tell, or a particularly interesting way to tell it. The town, in this case, is God’s Pocket, and we open at a funeral. A young man named Leon (Caleb Landry Jones) has died, and the people of God’s Pocket have gathered to mourn and get drunk in their own way. – Dan M. (full review) Honeymoon is a kind of Trojan horse; going in cold and not knowing that its playing in the “Midnighters” section of SXSW, you’d think you were in just another festival drama about 20-something hipsters venturing into the woods to discover themselves and something new about their relationship, family, etc. — it is that, and a great deal more. Initially we’re confronted with talking heads of our couple explaining a disastrous first date over Indian food in Brooklyn. – John F. (full review) Four years ago Restrepo hit theaters, a documentary from Sebastian Junger and Tim Hetherington which gave us an intimate look at the life of 2nd Platoon of Battle Company during their 15-month duty in northeast Afghanistan. The film went on to earn an Oscar nomination and soon after, Hetherington was tragically killed while in Libya covering their 2011 civil war. Junger has now returned for a follow-up to the film titled Korengal. As explained by the director, “Korengal picks up where Restrepo left off; the same men, the same valley, the same commanders, but a very different look at the experience of war. Korengal explains how war works, what it feels like and what it does to the young men who fight it.”- Jordan R. Children are our legacy—our immortality. We sacrifice everything to raise them in our image, hoping for the best until they’re set free as fully formed adults ready to continue the cycle. And through our rosy-colored glasses of optimism we assume the journey ends happily in a successful second act for them and a well-earned third unencumbered by anything but love and adventure for us. Sadly, however, such broad ideas often prove little more than fantasy as decades spent in the daily grind of servitude to the system while playing second-fiddle to the children you say are the reason for it all leave you shadows of who you were. You become someone different, wonder if a return is possible or desired, and face the ugly truth that your kids may have been the only things keeping you together. This is the authentic depiction of warts-and-all-love screenwriter Hanif Kureishi and director Roger Michell have chosen for their fourth collaboration, Le Week-End. – Jared M. (full review)

Clearly inspired by the works of Wes Anderson and Woody Allen (although failing to reach the heights of either), The Longest Week follows Contrad Valmont (Jason Bateman), a philandering pseudo-intellectual who has been living off of his father’s hotel fortune. At 40, his delusional bubble is final burst when his parents, on a whim of wealthy petulance, get a divorce and decide to cut him off. Conrad is forced out of the hotel sweet that he had been living in for his entire adult life. Now, without the financial support of his parents, he seeks the shelter of his friend Dylan (Billy Crudup). The two possess a mutual envy and the tension between them only builds when Conrad steals Dylan’s girlfriend Beatrice (Olivia Wilde) out from under his nose. – Jordan C. (full review)

No No:  A Dockumentary (Jeffrey Radice)

This documentary about the life and times of Dock Ellis, the pitcher famous for throwing a no-hitter while on LSD, reveals itself to be so much more than that. Directed by Jeffrey Radice, No No is a in-depth character study of an angry black man not afraid to speak his mind, and what that courage cost him. What starts as something that feels directed at baseball fans widens its net considerably, emerging as a story anyone and everyone can take something from. – Dan M.

Inventive science-fiction films are very difficult to pull off, even more so when working with a small budget and limited resources. That didn’t stop director William Eubank (Love) from attempting to create something audacious with his second feature The Signal, a clever mash-up of sci-fi tropes resulting in a very commercial friendly product that will likely appeal to a broad audience. Add one dash of The Matrix, one part Chronicle and a little Dark City thrown in for good measure and you should have a sense of what kind of flavors The Signal is attempting to emulate. The story is also filled with some great misdirection resulting in some unexpected twists and turns that are genuinely surprising. Yet despite a healthy pedigree of movies that it draws from, The Signal is dulled by the fact that it borrows these concepts without innovating on them enough. – Raffi A. (full review) Two essential elements spring to the forefront of Fred Schepisi’s new romantic comedy, but they aren’t the titular Words and Pictures of the title. In fact, it’s the always luminescent Juliette Binoche and dourly handsome Clive Owen that justify the existence of this slight dramatic patchwork, although the movie keeps forgetting to move aside and let them collaboratively save the day. If you’re looking for a date night option, you might find that spending the time in company of Owen and Binoche is good value, but the pictures here tend to overshadow the quality of the words. – Nathan B. (full review)