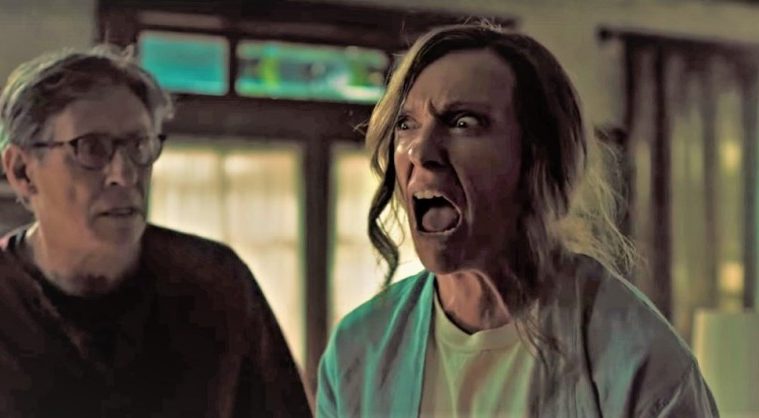 It’s hard not to like Danny McBride. Since his first movie role in David Gordon Green’s All The Real Girls to his breakout dark comedy The Foot Fist Way and beyond, the performer operates at his own energetic speed, often elevating whatever he’s in. In Arizona, directed by McBride’s Vice Principals producer Jonathan Watson, the comedian is given plenty to play with early on and he makes the most it. Unfortunately, the majority of the material is worn out in the first thirty minutes, which leaves the final fifty-five. – Dan M. (full review)

You most certainly should’ve already picked up the recently released Criterion Blu-ray, but in case you are too lazy to get off the couch, for a limited time Stanley Kubrick’s masterpiece is streaming on FilmStruck. In this special release, available through October 26, one can also watch a documentary featuring cast and crew interviews as well as audio excerpts from a 1976 interview with director Stanley Kubrick, a program about the film’s groundbreaking visuals, an interview with critic Michel Ciment, and more. Everything is and isn’t as it seems with Michael Pearce’s genre-fluid romantic thriller Beast. What starts with the template of rich girl falling for local bad boy against mom’s wishes turns to a case of serial murder with assumptions made every second that confirm what we believe is real just as they throw everything out the window. Nightmares point fingers inward, physical evidence out. Love becomes a weapon for hope and understanding as well as a mask for impending horror moving closer to home from the periphery. Pearce delivers numerous environmental and familial causes providing potential reasons as to why these characters might have it in them to kill. But none are more than excuses. They merely complicate matters until the truth exposes that evil needs no motivation. – Jared M. (full review)

The recent surge of a particular brand of arthouse horror, favoring tension- and character-building over blood-fueled gonzo insanity, has found at a home in A24 with the likes of The Witch, It Comes at Night, and even Yorgos Lanthimos’ recent features. Their latest in the genre comes with Hereditary, the directorial debut from writer-director Ari Aster, which–as the title suggests–is less haunted house horror and more about the terror tied with psychologically-taut familial relations. Not unlike Robert Eggers’ Sundance sensation, Aster displays proficient skill in eerie tone-setting, elaborate production design, and the type of scares that will leave a pervasive imprint on the mind, even if the underlying mythology gets over-complicated by the finale. – Jordan R. (full review)

Once thought to never see a release due to rights issues, the fine folks at Cinema Guild picked up Thom Andersen’s 2003 documentary Los Angeles Plays Itself for a release and after a Blu-ray debut, it’s now available to stream, in full, on MUBI. Tracking the history of Los Angeles entirely through films, the nearly three-hour documentary has been an underground gem in the last decade, but will hopefully rise in stature in the coming years due to the release. – Jordan R.

The premise of Gary Ross’s Ocean’s Eight need hardly be explained; the innovations of the film stem not from reversed gender perspectives–scarcely utilized in a memorable fashion–but rather from the uniquely loud marketing that preceded the film’s release, drawn out and effective. Coverage of the cast shooting around New York City made it around the world: press photos featured actresses eating at famous local establishments such as the Ukrainian diner Veselka. A behind the scenes photo of Sandra Bullock and Rihanna eating hotdogs in between takes still hangs in the Papaya Dog on 14th and 1st. In hindsight, perhaps expecting the film to live up to its insurmountable hype was a bit of a fool’s errand. – Jason O. (full review)

Guilt is a powerful thing. It can make you act in ways that go against your own survival and yet still ensure those actions are selfishly motivated. You aren’t necessarily acting to help another or have their best interests in mind. Your goal is to make-up for something you did previously. It’s about feeling better and feeding a misguided notion that you’re somehow the center of attention—the inevitable bringer of unwarranted pain and suffering. Wars have been fought over guilt. Religions have embraced it as strength. But all it truly delivers is a skewed outlook on responsibility. Sometimes things are simply out of your control. Sometimes an accident is exactly that. Guilt is a destroyer too many just can’t ignore. And it drives us straight towards oblivion. This concept—along with its twin shame—is central to the plot of Alex Haughey and Brian Vidal’s feature-length science fiction debut Prodigy.  – Jared M. (full review)

Won’t You Be My Neighbor? (Morgan Neville)

When Fred Rogers sang the iconic title song of Won’t You Be My Neighbor? at the beginning of the documentary, a chorus of audience members singing along rose up around it. For multiple generations, Rogers’ PBS program Mr. Rogers’ Neighborhood cannot be separated from childhood itself. The film can easily coast on sentimentality and nostalgia for emotion, and does so frequently and unabashed. Which is frustrating, since there are glimpses of a more complex human being throughout the film, one who would have made for a much better subject. – Dan S. (full review)

It is, undeniably, a bold decision to title one’s film Western: on the one hand, the word carries geopolitical weight and a cultural hegemony that the cinema is dominated by; this truth remains an important one at the Cannes Film Festival, where white men dominate the competition (Western opened in the sidebar program, Un Certain Regard). On the other hand, of course, Western implies a cinematic reference—a genre, in and of itself. A genre, to be clear, with tropes galore that are just as problematic as the industry that propagates them. In titling her film as such, however, Valeska Grisebach’s contemplative, brilliant film sparks a dialogue on all of these components, prompting us to think critically on their intersections. – Jake H. (full review)

Lick the Star
The Moonshiners
A Private Function