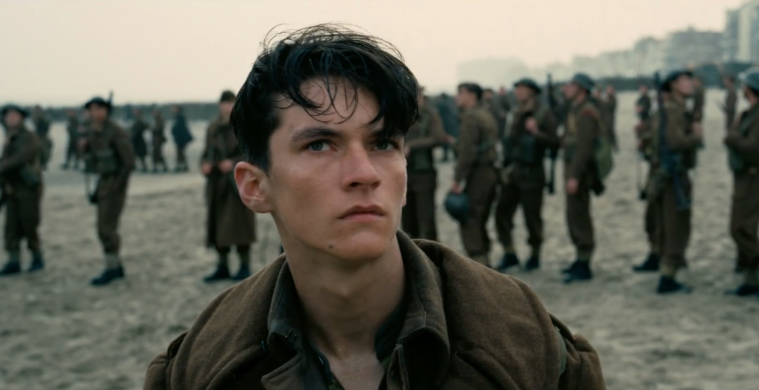 In the hours since viewing Dunkirk – the newest film from surprisingly divisive blockbuster director Christopher Nolan – one sensory recollection has stuck out above all others. Every time that British spitfire pilot Farrier (Tom Hardy) accelerates or banks his plane, the soundtrack fills with the noise of metallic rattling, an uncomfortable chorus of knocks and pings that lets you know exactly how much stress and force are working on the riveted metal of the aircraft. It is enough to make the audience member grip his or her armrest and go tense, holding their breath lest their exhalation somehow force the machine apart. On the screen, the yolk trembles and the canopy trembles, and all the while that sound lets you know that these are not tricks of the eye. This is very much a device built by human hands, piloted by a man who depends on it to live, and who is operating it at his own tremendous peril. – Brian R. (full review)

The threat of the unknown lurks behind every door, every parcel of darkness, and every character motivation in It Comes at Night. While the world writer-director Trey Edward Shults hints at is larger than in Krisha, it’s a similarly scaled exercise in wringing out tension — one that’s more patient than his debut, even if the whole is not as great as the sum of its formally impressive parts. The details in this post-apocalyptic chamber drama — flat-out horror this is not — are spare, an initially refreshing decision that ultimately results in a rather empty, half-formed narrative. – Jordan R. (full review)

“Whatever Disney would do, do the exact opposite.” It’s unlikely that James Mangold and crew took this as a conscious creed in the production of western/thriller/sci-fi superhero adaptation Logan, but they might as well have done so. Lean, gruesome, bleak, tragic, and possessing an air of morbid finality — supposedly Hugh Jackman and Patrick Stewart’s final performances as beloved superheroes Wolverine and Professor Charles Xavier after 17 years — the decisively R-rated film is antithetical in nearly every single aesthetic choice to the tangled, homogeneous mass of blockbuster Marvel Comics adaptations with which Disney has saturated the market. Even more antithetical, and more significant: the film is clearly the work Mangold and company wanted to make, and Fox — perhaps eager to prove a point before the House of Mouse as they struggle to retain their few remaining Marvel licenses — gave them seemingly unreserved freedom to do so. Using the conventions of the superhero genre and the established continuity of prior films as creative springboards rather than ends unto themselves, the film dares to tell a self-contained, character-driven story with a beginning, middle and end; one that, for better or worse, borrows as much from the elegiac postmodern western as Marvel’s heroic pulp fantasy. – Eli F.

A stunning performance can elevate an ordinary script, yet Jake Gyllenhaal shows that first-time director Dan Gilroy has been absorbing what became of his various writing projects over the years. Here, Gilroy attacks the norm with his screenplay. We aren’t so much introduced to Gyllenhaal’s Lou Bloom as he announces his presence in the world of LA at night. Bloom is the anti-hero of the film, and yet you root for him throughout. Part of that is simply because he is the character we follow, but part of it is that he also exposes the deep-rooted reality of the news media. Bloom is a nightcrawler, who arrives on the scenes of accidents to record them with his camera and sell them to the morning news. But more than a skewering of the news, I found this to be a keenly precise character study of a man who succeeds precisely because he has a lack of empathy, a trait that might win you praise in other places. Gyllenhaal rarely blinks on camera, is visibly gaunt, and gives off an intensity that makes you uncomfortable. But the film is also brilliantly filled with touches of humor, evidenced by his long-winded rants that sound like they were stripped from a self-help book or the relationship he has with Nina (Rene Russo). Nightcrawler is intense, riveting, and darkly hilarious in all of the best ways. – Bill G.

Following the Second World War, European auteurs probed its lingering national psychological fallout resulting in films such as Night and Fog, Hiroshima Mon Amour, and Germany Year Zero. Phoenix sits well within that style, its historical perspective strangely 60 years out of date but not unwelcome for it. Themes of identity, guilt, and misrecognition play out when a Holocaust survivor returns to Berlin. Nelly (Nina Hoss), who’s had reconstructive surgery on her face, seeks out her husband Johnny (Ronald Zehrfeld) in the ruins of the city even as her friend Lene (Nina Kunzendorf) warns her that Johnny betrayed her to the Nazis. – Martin J. (full review)

Those with any standing interest in the Dardenne brothers are well aware that The Unknown Girl is not a standard project, at least in how it’s traveled from creation to release. Breaking their long-standing one-every-three-years tradition, premiering but two (two!) years after Two Days, One Night, is one thing, and a forgivable thing at that had it earned the critical plaudits and awards handed them every single go-round. That it hobbled out of Cannes with, at best, “friendly” notices (if that) and nothing else in tow is, in and of itself, enough, but then the perfectionist pair went and reedited the film on account of these issues. Are some of the world’s most acclaimed filmmakers handing us a damaged object? To my mind, no. The Unknown Girl is über-Dardenne brothers, a seemingly slight detective story collapsing nearly innumerable aesthetic, formal, and thematic interests into a warm embrace, reminding us yet again why their voices are indispensable.  – Nick N.

After the quaint, touching documentary The B-Side from earlier this year, director Errol Morris is back with a more ambitious undertaking: a six-part Netflix series or (depending who you talk to) a film. Clocking in at 241 minutes and described as “a twisting, evolving story of one man’s sixty-year quest to identify the circumstances of his father’s mysterious death, “Peter Sarsgaard leads the project, which combines Morris’ documentary approach with a narrative. Also starring Molly Parker, Christian Camargo, Scott Shepherd, Tim Blake Nelson, Bob Balaban, Jimmi Simpson, and Michael Chernus, it mixes LSD, the CIA, and mind control along with a number of directorial techniques.

The Films of Juzo Itami
Return to Glennascaul