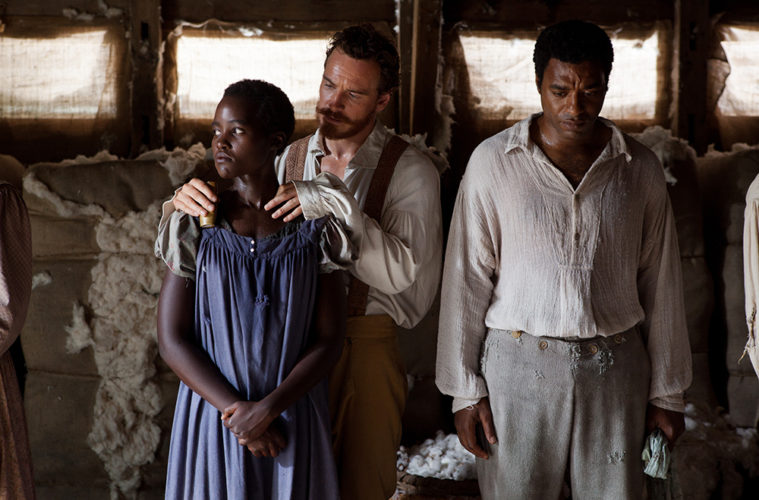 It may have evolved into the “safe choice” for movie of the year, but 12 Years a Slave remains the one that I seem to compare all others to ever since seeing it this fall. Steve McQueen is at the top of his game getting amazing performances from Chiwetel Ejiofor, Michael Fassbender, Lupita Nyong’o, and a ton of recognizable faces from start to finish; orchestrating unsettling scenes such as falsely enslaved Solomon Northrup hanging from a tree by his neck in an excruciatingly long take; and meticulously ensuring that the look and feel of the era comes through in all its brutal injustice. People say it’s excessive, but it’s merely authentic. This is the pain and suffering far too many have forgotten. This is our nation’s darkest day, uncensored and in your face, no longer ignored but seen for its blight on our history as “land of the free.” – Jared M. (full review)

Directed by Jacob Vaughan, who co-wrote the film with Benjamin Hayes, Bad Milo follows a man (the always hilarious Ken Marino) who discovers that his chronic stomach problems are due to a demon baby living in his colon. The concept bears some resemblance to the recent Hell Baby, but with different intentions – while Hell Baby pokes fun at films like The Exorcist and Rosemary’s Baby, Bad Milo borrows more from It’s Alive orThe Brood, wherein the evil spawn takes revenge on those who wronged their parents. The story also takes a more gruesome turn when the main character’s anus serves as a birthing canal. Enjoy. – Amanda W.

Every now and then a film completely sideswipes your mental capacities and takes over. Since seeing Cheap Thrills at SXSW, I’ve hardly been able to get the film out of my head. It’s stuck there, jabbing me every dozen minutes and reminding me how much I was in its deathgrip for around 90 minutes. There is very little fat to this work, a good sign, considering I don’t know if I could have taken any more visceral punishment. The stakes, the violence and the intensity were constantly moving higher as each minute ticked away. – Bill G. (full review)

Having directed Il Divo, Paolo Sorrentino is no stranger to extravagant Italian filmmaking that packs a punch of bravado and boldness. With The Great Beauty he may be channeling this aesthetic on overdrive, creating a vast tapestry of Italian elitism that is both breathtaking and audacious in its vision; featuring a vast array of characters — including politicians, artists, social climbers, aristocrats, and intellectuals — the wide variety of personalities are, on their own, as fascinating as they are overwhelming. Balancing all these elements — including high-value production design and fashion straight off the runway — and wrapping them in a virtuoso package is a daunting challenge which, for the most part, Sorrentino pulls off. With the feeling of a modern-day Fellini picture, La Grande Bellezza proves an opulent tale of life, love, and loss set against the backdrop of beautiful Rome. – Raffi A. (full review)

In Arnaud Desplechin‘s Jimmy P.: Psychotherapy of a Plains Indian, the French director makes his second leap toward the English-language realm (following Esther Kahn) to varying degrees of success. Based on the true story of a Native American suffering from a series of debilitating headaches, the film is adapted from a text by the actual therapist who treated the titular Plains Indian. Much of the focus is centered on how clinical psychiatry differed in techniques towards the end of World War II. It’s a bit reminiscent of something like The King’s Speech, which also focused on the relationship of therapist and patient, albeit in completely different circumstances. The problem with Jimmy P. is that despite being intensely focused on the relationship between these two characters, the film never really amounts to much and feels meandering and dull. – Raffi A. (full review)

Alexander Payne’s latest feature is his best, a wonderful film that does so much right from its unique tone (shifting quietly from parody to melancholy) and its relationships. The story is centered around the life of Woody Grant (Bruce Dern, in a brilliant performance) and potentially his alternative life as he returns to rural Nebraska on his way to claim a prize. Enabling the stubborn old Woody is his son David (Will Forte), a lonely stereo salesman. June Squibb also gives a hilarious performance as Woody’s wife. Nebraska is a rough, yet lovable movie, hitting notes so rarely seen. It is one of the best road comedies ever made, embodying the old notion that road movies are about the journey, not the destination. Here is a film that reflects on journey in truly profound and often heartbreaking ways. – John F. (full review)

Coming hot off the heels of the original’s 10-year anniversary, Spike Lee‘s remake of Chan-wook Park‘s Oldboy may succeed in swaying domestic audiences unfamiliar with the source material. Sadly, those who have seen the 2003 film will not be as impressed. After a certain point, Lee’s film willfully follows the narrative footsteps of the original. It is all very familiar, with only a few welcome deviations made. There is only so much you can do with this material, and, although the creators involved are more fond of the word “reinterpretation,” this is a straight-up remake. The set-up alone establishes that this Oldboy is none too interested in reinventing the formula. – Jack G. (full review) Though it be writer/director Sofia Coppola‘s fourth film, Somewhere feels like her first. It’s the kind of flawed, precious and passionate character study, both helped and hindered by a wide film school-knowledge of cinema, that proudly introduces a new filmmaker to the masses. Unfortunately, we’ve known Coppola for some time now. Once indie-prince Stephen Dorff stars as action movie star Johnny Marco, drinking and sleeping through life in the Chateau Marmont Hotel in Los Angeles. The first shot of the film lasts three minutes and consists of Johnny doing laps around a race track in a fancy car. And so goes the rest of the film, mostly nowhere. Until it goes places, and then it’s over. – Dan M. (full review) Just because you’re an assassin doesn’t mean you can’t still be a girl too. The titular Violet (Alexis Bledel) and Daisy (Saoirse Ronan) don’t let their work get in the way of gossip, pop music, laughter, or dance. Murder is simply a way to pay the rent and retain some semblance of the childhood young women their age should have. They make a great team and provide a service with the same amount of detachment as any other. Each victim is a statistic deserving his/her end for one reason or another. Sure they could sit at bank or a law office helping to foreclose on homes, decline loans, and put innocents away on technicalities. But if ruining lives is your game, why not go all the way? Like Vi says, killing sure beats data entry. – Jared M. (full review)

Enron: The Smartest Guys in the Room
Jesus Camp
Surfwise