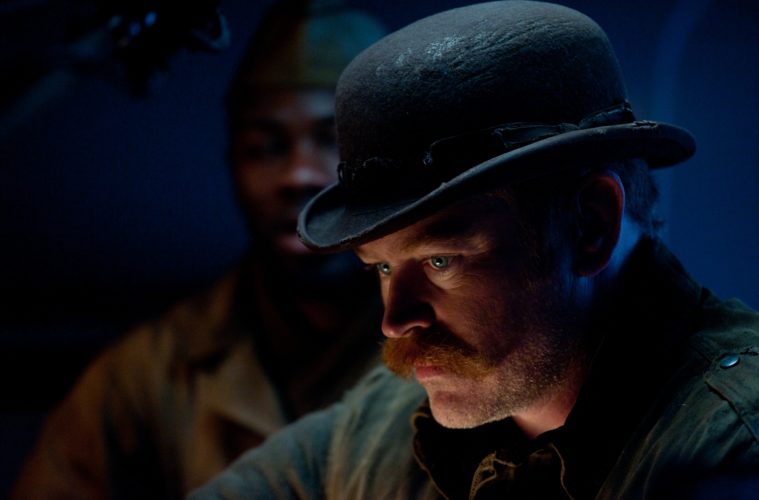 Currently a third season villain on FX’s Justified, Neal McDonough hinted at a possible production timetable and some vague (and, possibly, imaginary) plot details of Marvel’s inevitable sequel to Captain America. Those happened to include both his character, Dum Dum Dugan, making an appearance there and in a Samuel L. Jackson-starring Nick Fury solo movie. [BadassDigest, via IMDB]

McDonough may not be a household name, but he’s been a familiar and welcome face in strong supporting roles (Minority Report, Flags Of Our Fathers); his sidekick role as Dugan lent a fun vibe to yet another forgettable, one-note character in that particular comic book universe. Still, followers of Justified know that he’s already proven himself a suave, remorseless villain this season.

The subject of McDonough‘s role in the next round of Marvel superhero flicks may or may not reflect the sensibilities of the producers, directors or screenwriters, but they’re not terrible ideas:

Yeah, they’re planning (to go into production for) Captain America 2 for the end of this year, because Marvel does one film at a time. So they’re going to do Thor 2 and as soon as Thor has wrapped, they’ll do Cap 2. Hopefully right after that, we’ll jump into Nick Fury because that’s the one I’m looking forward to more than anything.

It’ll be me and Sam Jackson. In the real Marvel universe, Dum Dum Dugan is Nick Fury’s right hand man.

…And I just pray that they have a 1970s setting, because I want to see Sam Jackson with lambchops kicking people’s asses for Marvel universe. It would just be awesome. And to work with Sam would be a treat. We’ve become friendly over the years.

Seriously, set Nick Fury in the ’70s. Why not? Captain America: The First Avenger took great advantage of its period setting, which ended up being one of the best things about the film. Marvel’s comic book-movie universe had always been far more colorful and kind of disturbing in ridiculous ways, anyway, and it would fit perfectly with this time. That last statement could stand for a plausible description of ’70s pop culture as a whole, however.

Take all of this with several tons of salt. There is very little in the way of details about these summer blockbusters Marvel has lined up for the next few years, but they are happening. Samuel L. Jackson signed a deal to appear as Nick Fury in nine movies, after all. Count how many he has left, and at least one will be all him. I think McDonough would be a strong addition to such a project, but we’ll see if everything lines up the way he really hopes it does.

What do you think of these plots hints for the next Marvel films?