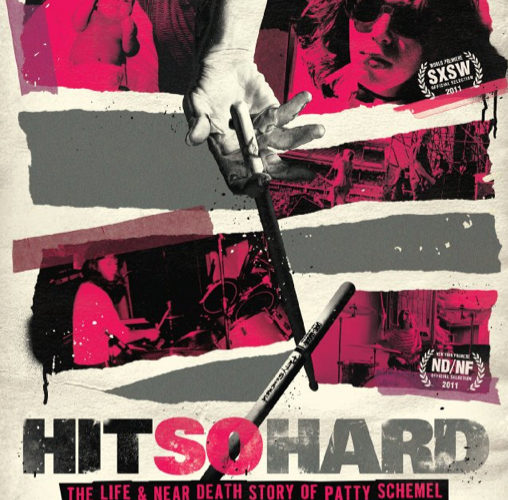 [NDNF Review] Hit So Hard: The Life and Near Death Story of Patty Schemel When most think of rock docs, it’s likely VH1’s award-winning Behind the Music pops into their mind. Blending a featured band’s comprehensive history with a fast-paced narrative and popular music, it was a documentary series that was accessible and entertaining to the ardent fans and newbies alike. P. David Ebersole’s Hit So Hard is not so inclusive, favoring a storytelling method that assumes the film’s audience will be devotees of the bygone grunge age – or at the least deeply fascinated by Kurt and Courtney. Anyone else might struggle to follow the film’s tenuous thread.

Hit So Hard focuses on the roller-coaster-like life story of drummer Patty Schemel, an outcast turned struggling artist turned rock star turned literal crack whore turned mentor. It’s a compelling tale and Schemel is engrossing as she openly reveals her highs and lows with a self-deprecating sense of humor and utter lack of self-pity. She’s charming, and it’s easy to see how Ebersole was able to gather so many rock icons to speak about Patty and her contribution to music. Aside from intensive interviews with Patty’s former bandmates, Courtney Love, Eric Erlandson, and Melissa Auf de Maur, this doc also features Roddy Bottom of Faith No More, pop culuture writer Sarah Vowell, and a number of noteworthy lady drummers like Debbi Peterson of the Bangles, Kate Schellenbach of the Beastie Boys, and Gina Shock of the Go-Gos. Together this colorful cast of characters reveals not just the facts of Patty’s rocky road but also the context of her struggles, as a drummer within a band, as a woman in rock, as a lesbian in the spotlight, etc. It’s a doc jam-packed with interesting elements, but that’s part of the problem.

At 101 minutes the doc feels long, largely because there’s no apparent narrative thread — not thematically and certainly not chronologically. As such, it devolves into an incoherent mess of anecdotes and speculation. Combine this with eye-achingly amateur graphic treatments and some horrendously poor quality press footage and Hit So Hard is at times hard to watch. The most egregious example is when Ebersole (who also edited the film) creates a four way split screen bouncing from one Hole member interview to the next by retracting a totally distracting threshold filter, which flickers and remains on the subjects you’re not supposed to be looking at. It’s a rock doc with ADD careening from one Schemel-centered anecdote to another with little sense of flow or relevance. Part of the problem is the Ebersole seems to want to give Patty’s redemption story a grander meaning, but instead of choosing one theme and focusing, he throws out numerous possibilies. Is this a story of a lesbian coming into her own? Is it a story of rock n’ roll inevitably leading to unstable lifestyles and thereby drug abuse? Is it a story of the additional hardships women in rock face? Is it a story of how unfairly drummers are treated? Yes, it’s all these things, but refusing to focus the narrative makes it less a well-thought out argument and more an inarticulate rant.

Still, fans of Kurt and Courtney will have reason to celebrate as Hit So Hard features a bevy of footage of the pair’s home movies, many of which center on baby Frances Bean before the death of Kurt Cobain. These moments are heartbreaking, and often allowed to unroll without glossy graphics. In fact, the scenes that prove the most compelling are those unadorned with gratuitous filters and split screens. When Patty’s mother talks about her coming out, when Patty speaks bluntly about the extent of her addiction, when Ebersole lets us look at the subject instead of attempting to dazzle with a hodgepodge of flash (a strange choice in a doc about grunge music) – this is when Hit So Hard lives up to its name. Finally, a word on Courtney Love: I found it thoroughly disappointing that in a film centered on a talented woman who was cast aside by Love’s feckless bravado, the notorious ego-maniac steals focus. (Life imitates art I suppose.) While Love’s interviews would seem crucial, lending a counterpoint Patty’s eventual departure from Hole, her interviews are expectedly unhinged. Love is clearly on something and rarely makes any kind of sense, ranting and proselytizing while wearing smudged lipstick and gnawing on an indecipherable food item. Her interview is more disruptive than revelatory, and left me wondering much more about Love than about Schemel as the credits rolled.

Ultimately, Hit So Hard is an eye-opening doc despite its director’s best efforts to make it look “edgy.” Schemel’s story is harrowing, but ultimately uplifting as she has found her happy place, where she can play music and mentor young girls in hopes they’ll avoid the pitfalls she fell prey to. She’s fearless in allowing her life and secrets to be unraveled, and it makes this gritty doc shine despite its drawbacks. However, I’d venture that Hit So Hard is for fans only.

Hit So Hard is currently screening at The Film Society of Lincoln Center’s NDNF, with a special reunion appearance of Hole on Monday March 28.