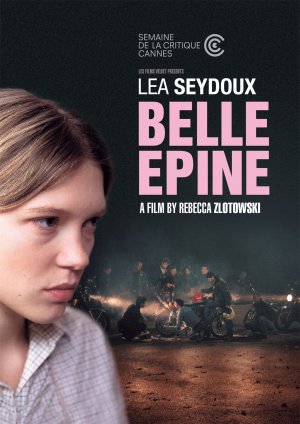 The feature debut of writer/director Rebecca Zlotowski, Belle Épine focuses on the coming of age story of an angry girl who wields sex like a weapon.

Léa Seydoux plays Prudence Friedman, a Jewish teen left alone to deal with the death of her mother. With her father away on business and her sister staying with friends, Prudence paces about her empty home like a caged animal. Feeling lost and enraged, she rejects Jewish traditions of mourning and favors rebellion. She shoplifts, tears cloths from mourning mirrors, and seeks out a group of teen bikers, who race the empty streets of Le Havre at night, leather clad and looking for trouble. In short order, she bonds with a fiery redhead named Maryline,who drinks, flirts and is eternally braless. But as Prudence begins to follow her lead,  their friendship sours, turning adversarial as Prudence’s devil-may-care attitude and reckless flirtations garner more attention from the boys. Prudence shrugs off Maryline’s scorn and quickly beds one of the boys, but less out of desire for him and more out an urge to meet and be close to his mother — any mother. Ultimately a tale of an angry young woman who wants confirmation that the world deserves her contempt, Belle is at times riveting, revealing a gritty and raw portrait of growing up.

Seydoux burns with rage and sensuality, which works wonders for much of the film. Her heedless pursuit of sex and thrills combined with her long hair and effortless beauty is evocative of Catherine Deneuve circa Belle de Jour. However, when called upon to do more than glower or smolder, Seydoux struggles sputtering between a pouting face and a blank stare. The result is an uneven emotional journey.

Ultimately, Zlotowski’s girl gone wild narrative is a bumpy ride. Some scenes are understated and gripping, but others fall flat as they revolve around little more than a teenager sulking. In the third act, Zlotowski seems to lose control of her creation, when the biting drama gives way to tragic conventions and an ill-fittingly surreal denouement. (I don’t think I’m the only one who was left confused when the film cut to credits.) Despite it’s flaws, there is something unpolished and intriguing about Belle: it’s fearlessness in displaying Prudence’s journey warts and all.

Belle Épine is currently screening at The Film Society of Lincoln Center’s NDNF.