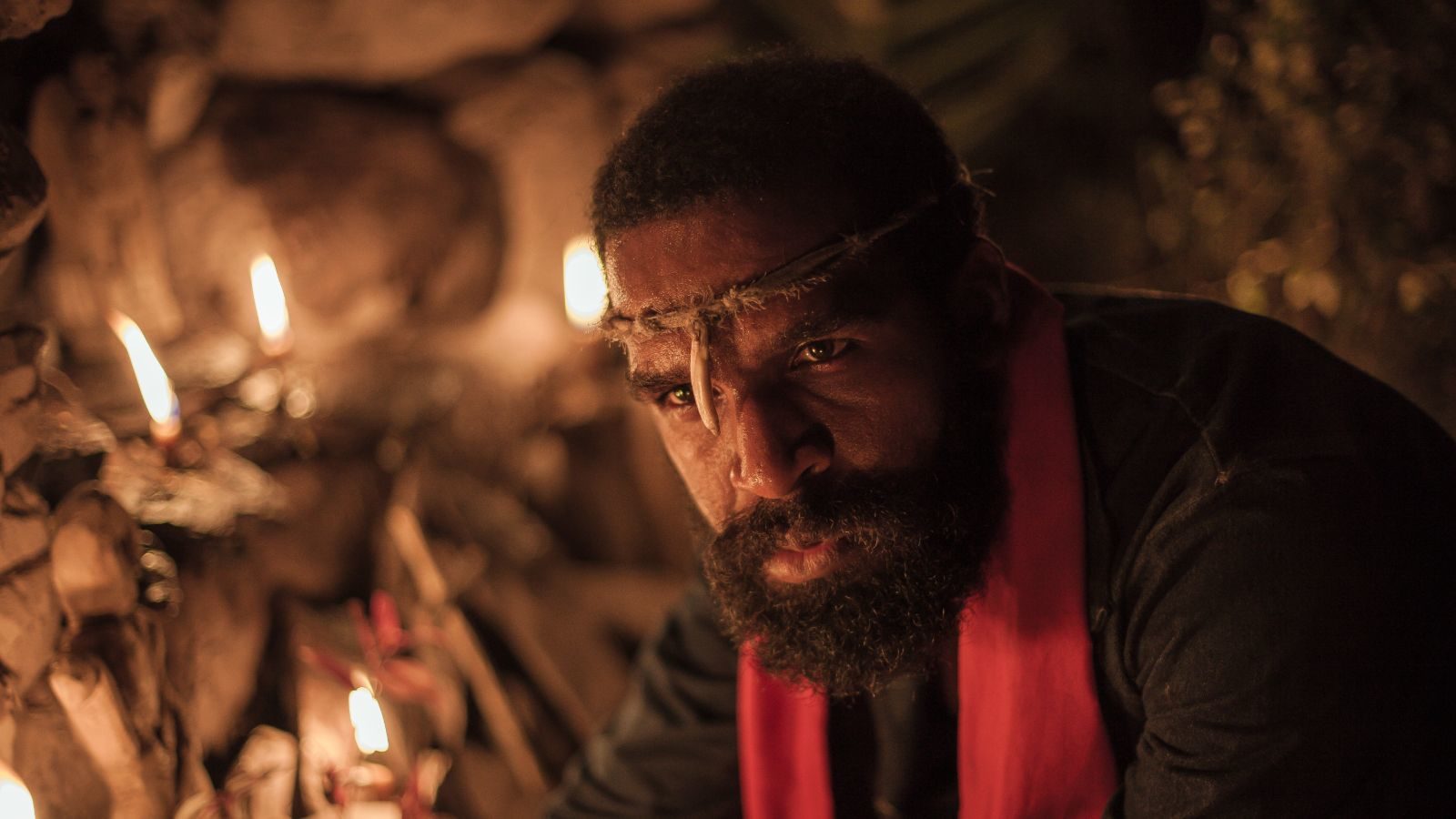 Depending on the storyteller, the early 20th century folk hero Olivorio Mateo (the Papá Liborio of the title), was a Creole saint or a dangerous cult leader. His origins are inauspicious: a farmer thought to be dead after a hurricane in San Juan de la Maguana in the Dominican Republic. After a Novena, he miraculously returns, claiming that he was in heaven and sent back to Earth by God.

Nino Martínez Sosa’s lush, beguiling ND/NF selection Liborio recounts his influence––but not with the focused purpose or literary density of a biopic. Despite an otherworldly and ominous prologue of his origins, Sosa’s filmmaking approach largely sidesteps a version of his truth, favoring both over the shoulder angles in its visual language and a historically informed, but cryptic structure.

After his return, Liborio’s reputation bloomed and he became the center of attention for his home village––a field hand who returns without a scratch and an aura of the beyond. Found by his friend, Eleu (Anderson Monica), emerging from a thicket above a cavern, he’s happily embraced with only minor doubts from select members of the village. He soon draws in villagers from other lands and much of the film is these people coordinating as a community and outside forces preparing to intervene.

A cursory guess about colonialism’s spread in the Caribbean will illuminate the identity of those invaders. And whether it’s projection or not, there’s a hint of a missionary quality to Liborio before his intent is elaborated. Those aforementioned factions vie for political control and alternately see Liborio as an ally or a barrier to their aims. But conversations about these outside events have very little context, either seen too close or too far from those details.

Cycling through six perspectives of devotees in his orbit of influence, Sosa and co-writer Pablo Arellano’s script is nonetheless more enamored with individual dynamics of reverence toward Liborio and how that atmosphere infuses into the tight-knit village community. The dryly evocative line readings likewise shift from describing dreams to the texture of a plum without acknowledgment.

That intermingling of the ontological and mundane extends to much of the rest of the film, either sprinkled to draw attention, or a recognition of the cultural comfort with this inherent spiritualism. And yet, the dialogue also has a deliberate lack of adornment. It’s almost purely perfunctory in a way that counters the conquerer’s records of Liborio and his group as any traditional form of a cult. Even a potentially big decision by Liborio is not about insulation, but safety.

In characterization, the other point of views unfortunately then don’t vary enough in temperament or language. Matilde’s (Karina Valdez) maternal figure, a child named Plinio’s (Gabriel Medina) outside view, and another person who’s completely outside the village stand out. They’re still a matter of degree in their different personalities. And their collective gravitation, Liborio (a somnambulant but stolid Vicente Santos) commands a trance-like response that lacks a certain spark despite its intended hypnosis.

The film occasionally risks inertness in its storytelling and texture, were it not for its bewitching formal choices. An editor by trade, Sosa’s filmmaking find a pleasant middle ground with shots that conjure both a teeming mystery and showcase the imposing grandeur of its shooting locations. Shot on location with cinematographer Óscar Durán, Liborio’s greatest strength is its sense of place. It’s both staggeringly beautiful and emanates a real sense of grit and materiality. The effectively agitated sound design of Maite Rivera Carbonell only complements the tonal ambiguity of these surroundings.

To be clear, this isn’t a film that attempts to cloud the legacy of a beloved figure. Rather, it’s keyed into the disquieting experience of following someone shrouded in the unknown. Some characters are immediate believers while others take time acclimating to this environment. It’s not one that demands behavior, but it’s also one of diligence.

Accused of being a witch doctor by outsiders to the village, the film pokes at these accusations with scenes that present Liborio performing an exorcism or the camera covertly watching a baby being delivered through the eyes of a character experiencing just a shred of doubt. In those moments, Sosa’s debut showcases the beginnings of a filmmaker tuned into the liminal space of purity and impurity. It’s mostly a mesmerizing experience, but hopefully next time he finds a script that’s as alluring as his created mood.