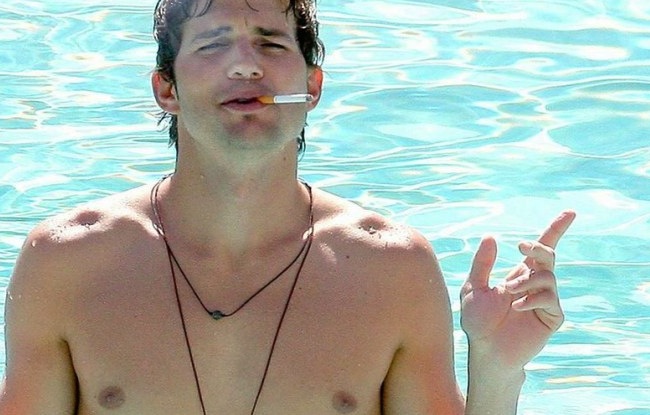 Natalie Portman and Carrots and Ashton Kutcher, Oh My! Take a good look at the first image (below, not above, and no I will not apologize) from director Ivan Reitman‘s new comedy, No Strings Attached. Try to guess what’s going on.

(answer after the pic) Got an idea? If you guessed a blue plaid-clad Ashton Kutcher is handing frumpy trenchcoat Natalie Portman a bundle of carrots, you’re absolutely right. In the film, the two undoubtedly well-paid actors play a couple of lifetime friends turned F-asterisk-asterisk-K buddies. Get it? No Strings Attached?

“We should have just called the movie ‘Clooney,'” Kutcher said. “That’s the kind of relationship George Clooney has had for the past 20 years. He seems happy.”

Apparently Kutcher’s character, in order to avoid breaking their No Giving Flowers Rule of Disaffection, gives Portman’s character carrots instead of roses. Portman’s expressive actor face lets you know what she thinks of the gesture.

“I noticed from my own kids that with this generation in particular, young people find it easier to have a sexual relationship than an emotional one,” the 64-year old Reitman said. Specificsregarding how the Ghostbusters II director was inspired by his children’s sex lives are unavailable.

This isn’t the only film to explore the enigmatic friends with benefits relationship this year. We also have Love & Other Drugs coming Nov. 24 and Friends With Benefits coming this summer. Chances are one of the three will be good.