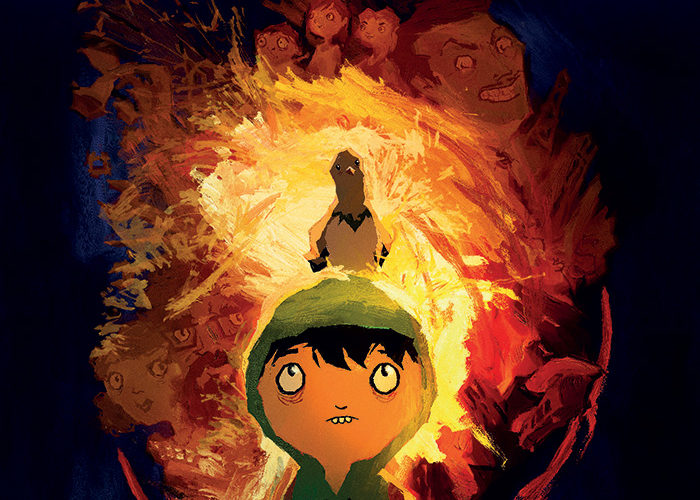 My First Film Fest Review: ‘Tito and the Birds’ is a Powerful, Potent Brazilian Animation

The “outbreak” started years ago when the twenty-four hour news cycle broke onto the scene by stoking fear for ratings out of a necessity for content. We used to only get an hour of local news every night — itself needing to be bolstered by a public interest story or two — with a few national programs enlightening us on world events. Information dispersal became editorializing. Editorializing became for-profit politicization wherein truth was filtered through a partisan prism pre-packaged for Election Day rather than relevancy. News became entertainment, snuff videos of beheadings and tragedies a click away on the internet for us to bask in a nationalist fervor of retribution and bloodlust. Race, religion, sexual orientation, and culture became our enemies as that pre-manufactured fear transformed into strength through hate.

America isn’t alone in this. Nations around the world are beholden to state-sanctioned news sources feeding a skewed truth and their own fearmongering with their own enemies painted as scapegoats to divert attention from themselves. Just as the internet (still) helps to fan the flames of such divisively dangerous rhetoric, however, it also provides avenues with which to fight back. Look at the way social media assisted in the Egyptian revolution. Watch as grassroots efforts online have connected groups ready to protest the multitude of injustices happening here in the US. And it’s no surprise that many of these forces are led by younger generations since they’re the ones who’ll be left to deal with the aftermath of fear’s oppression. They can still embrace all that “community” offers. Just like Issa López did in Mexico with Tigers Are Not Afraid, Brazilians Gabriel Bitar, André Catoto, and Gustavo Steinberg have crafted Tito and the Birds as a powerful metaphor utilizing reality’s horrors to drive home a point too many have resigned themselves into ignoring. Their animated world possesses its own profiteering media celebrity in Alaor Souza (Matheus Solano), his unjustified hysterics causing people to devolve into hermits, avoid “old downtown” urban areas, and start saving enough money to buy property underneath his state-of-the-art Dome Garden with its advanced border system able to paralyze any unwanted animals (or humans) seeking a path inside. As he works on the public’s growing anxiety, those brave enough to see through the scam become a rapidly dying breed.

Dr. Rufus (Matheus Nachtergarle) is of the latter and cognizant of his growing isolation. Desperate to facilitate a line of communication with birds to reawaken their storied past of warning humanity about impending catastrophe, he begins inventing an untested and volatile machine in his home. His wife Rosa (Denise Fraga) with popcorn in-hand and television on proves the perfect target for Souza’s brainwashing and thus becomes a strong proponent for a cocooning lifestyle she wishes her son Tito (Pedro Henrique) would embrace. So when an accident with the invention ultimately lands the boy in the hospital, Rufus has no choice but to leave. Tito blames prevalent societal fears of change and understanding for not pulling a lever as his Dad asked. He vows never to be scared again. Steinberg and co-writer Eduardo Benaim then fast-forward three years to see the fruits of Alaor’s labor. A physical outbreak erupts wherein people are turned into virtual rocks, their eyes bugging out and limbs retracting until they can do nothing but silently stare and blink. As scientists scramble to find a cure (stumbling upon Dr. Rufus’ old research and thus very interested in finding where he went after leaving Rosa and Tito), Alaor sees dollar signs. The worse this disease gets, the more powerful his Dome Garden becomes as a sanctuary. He goes on TV and spews vile calls to arms to remove the infected from the streets. He gives elites buying preference and ostensibly seeks to create a new homogenized oasis while the rabble is left to die.

Tito is suddenly humanity’s best hope to find a solution since he’s been trying to replicate and improve his Dad’s birdsong invention. With his courageous friend Sara (Marina Serretiello) by his side, he asks Alaor’s son Teo (Enrico Cardoso) for help — the entitled boy’s ego towards proving himself a great innovator possibly outweighing the privilege he’s inherited from his father. There’s a little science fiction, a lot of fantasy, and a surprisingly potent allegory for how we’ve forgotten that our strength as a species was always a byproduct of empathy and compassion. It was because we saw ourselves in strangers that we were able to build everything we have, the minds of an international body of geniuses uniting. This current increase of obsession with superiority only weakens us. It therefore becomes a race against time as the infection tears through the town and inevitably risks poor and rich alike. The pigeons might be able to supply a cure if only someone finds a way to cajole them into doing so — even if it means transferring his/her consciousness to the bird to find out. And clocking in at 73-minutes, there’s no room for plot-threads that aren’t integral to main message. Whether it’s a crazy bird lady on the bus or the twin troublemakers Teo keeps close as comic relief and muscle, everyone has a role to play as hero, martyr, or villain (Alaor is the default antagonist, his greed eschewing pure evil to mirror today’s opportunistic adversaries too self-absorbed to acknowledge the collateral damage of their plans).

Besides its unique animation style (crude, colorfully two-dimensional characters on oil-painted backgrounds with additive brushstrokes adding atmosphere and motion), the fact Tito and the Birds is Brazilian also ensures no one can dismiss its metaphor as one specifically alluding to what we in the US are going through. This isn’t about liberal Hollywood twisting some fictitious knife into the back of Middle America. It’s a human story that simply resonates beyond language and borders to expose how we aren’t alone in the troubles we face. Our problems are steeped in ideology that transcends cultures to reveal a fatal flaw in the basest levels of our DNA. Maybe it’s corny to say, but the words “the children are our future” have never sounded more prescient than now. We shall see.

Tito and the Birds has its New York premiere at Film Society of Lincoln Center’s My First Film Fest on November 10 and gets an awards-qualifying run on December 7 with a planned national rollout in early 2019.