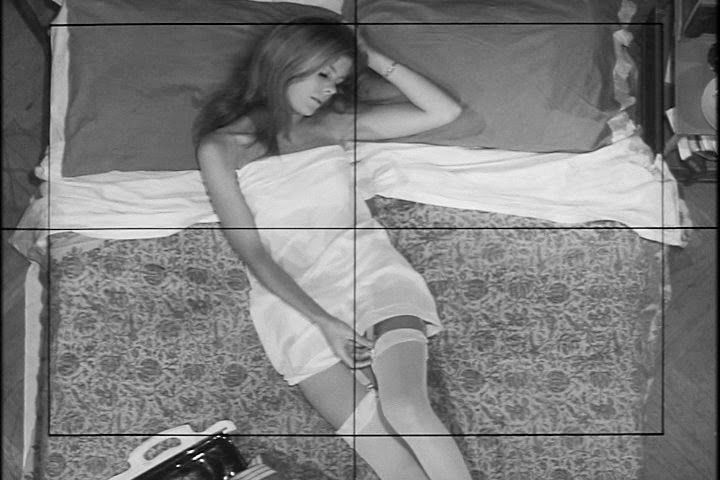 Debut features are often some of the most interesting cases one comes across when undertaking the deep-dive of an auteur’s filmography. Oftentimes, signature aesthetic tics are nascent, not developed, and these premiere outings are less than fully formed visions. However, there are plenty of impressive first films that present a filmmaker’s particular fixations as more or less formulated, a clear direction leading to the later canonical landmarks. Such is the case with Brian De Palma’s Murder à la Mod, which bares the thrillmeister’s genre proclivities in full view. Although Murder is technically the second film De Palma made, it was the first to get released, as 1963’s The Wedding Party wasn’t distributed until six years after its production. (It also stands as the man’s first solo feature effort.) Indeed, Murder à la Mod is less aligned with De Palma’s pre-Sisters satires than the comedy-horror-thrillers that would come to define his image in the ’70s, and thus, our image of “classic De Palma.”

The prologue serves as a concise encapsulation of De Palma’s over-arching thematic and visual interests, conveniently enough. Before that, though, we’re treated to a Polaroid-themed credits sequence, over which star William Finley warbles “Murder à la Mod, la Mod — it’s not so strange and not so odd,” an adage De Palma seems intent on disproving. With a rather seamless cut, the camera’s focus is transposed to a photoshoot where “studies of the human form” — in various states of undress, camera positioned at an extremely low angle, almost suggesting a Blow-Up reference — are relayed at sundry speeds, leading to a climactic gory death by razor blade that’s similar enough to the one in Dressed to Kill to not be discounted. De Palma closes the book on this sequence by doing so literally — the motif of the “photobiography,” pretty much exactly what it sounds like, being employed several times throughout the film to impress the director’s preoccupation with capturing the female form in a photographic enclosure.

Of course, this works in tandem with the filmmaker’s voyeuristic obsessions, leading to a casting session sequence seen entirely through a camera’s viewfinder — Powell’s Peeping Tom is the clear stylistic precursor here — where De Palma’s role as leering coaxer is laid bare. We hear the director’s voice trying to persuade his models to take their dresses off, as he demurs their questions about the characters they’re playing. Obviously not interested in the nuances of performance, De Palma rather fixates on the practicalities of low-budget filmmaking; “And this is supposed to be sexy?” one of the models asks incredulously, while he, increasingly exasperated, tells her that there is film running in the camera. The viewer would get the impression De Palma is not one to be teased, but the amount of time this film spends ogling fully-clothed women suggests a strain of masochism.

Naturally, being a debut from the ultra-cineliterate New Hollywood generation, Murder à la Mod‘s subject has to, in some part, pertain to the act of filmmaking. Karen (Margo Norton) plays the girlfriend to reluctant pornographer Christopher (Jared Martin), filling his role behind the camera on account of a debt owed to sleazeball nudie producers. William Finley outshines the lot as Otto, the impish prankster and star of Christopher’s pictures, and it is with Christopher that Otto completes the two halves of De Palma’s persona — the ashamed voyeur and the unabashed reveler in all things perverse. Although, as is the case with the best of De Palma’s suspense pictures, not all is as meets the eye and split personalities abound. “I’m a clumsy man of words, I’ll show you in pictures”, Christopher tells Karen, attempting to relay why his profession is so morally abhorrent, “[In the peepshow theater] he can be a pervert, a sex maniac… and when the lights come on, he’s just another fellow taking in a movie.” The self-implication that comes with movie-watching has been a fixation for much of cinema’s history, and De Palma makes it explicit here — half-clumsily, half-endearingly.

One would assume De Palma reins in these aesthetic statements of intent for the bulk of a film concerned with plot, but it’s too giddily drunk on what opportunities genre filmmaking allows for experimentation. What sets Murder apart from say, Scorsese’s debut, Who’s That Knocking At My Door?, is an assurance that comes with De Palma’s handling of both camera and genre, demonstrating how intensely familiar he is with the archetypes at work and how easily, even at this nascent stage, he can pervert them. Much is taken from Psycho, including a subplot involving a stolen envelope of money — but, most interestingly, manipulation of voiceover to both elucidate and obscure character motivations revolving around the film’s central murder. Nonlinear narrative and vantage points are tampered with (although the transitions between these are the movie’s clunkiest moments), providing a ground zero for a significant facet of Quentin Tarantino’s oeuvre.

Changes in film speed and stock are also among Murder à la Mod’s pleasures, indeed pointing to the influence both silent comedies and, more immediately, the French New Wave had on De Palma’s sensibilities; however, late-60s Truffaut, rather than Godard, strikes one as the greater figure looming over the film, with its attention to the rules of suspense. But aforementioned perversions of the precedents set by Hitchcock and others are what make De Palma’s cinema worthwhile. A noteworthy moment: as the camera is stealthily following Karen to the shower, a detour is taken around a corner to reveal an unidentified hand holding out an ominous clock for the audience to see. This digression exposes a key aspect of the way De Palma films thrillers: the camera (and, therefore, audience) is just as complicit in the gory violence enacted upon victims.

Otto is revealed to be the closest thing to an audience surrogate in the film’s climax — which takes place in a projection booth, naturally. He becomes an accidental murderer, through a mishap between a real and trick ice pick — a perfect metaphor for Brian De Palma’s prevailing style if ever there was one — and is genuinely bewildered by what he has done. He then happens upon Karen’s “photobiography,” which contains an image of her corpse, and hauntingly remarks, “A picture. He killed her and he put her in the picture.” In that indelible final moment, the induction of Brian De Palma as a significant cinematic voice is undeniable.