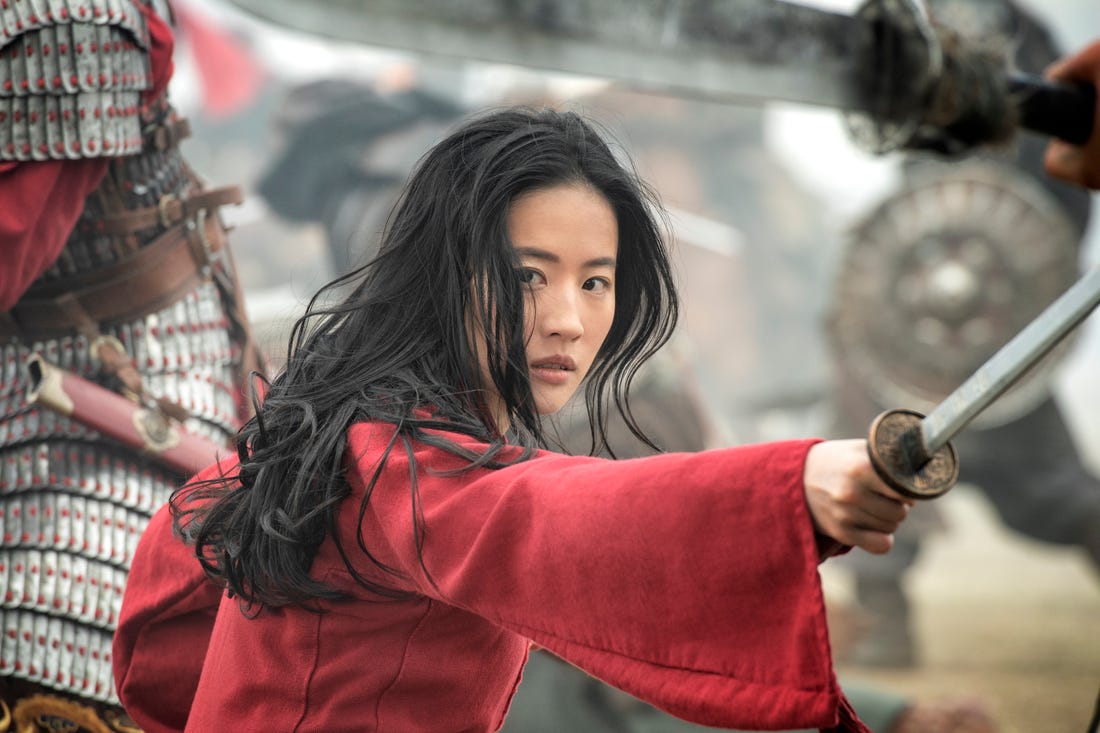 “Mulan! Take control of yourself!” These shouts greet young Mulan as she runs and leaps across her village, attempting to catch a wayward chicken. Set during the time of China’s Han Dynasty, Disney’s live-action adaptation of the animated favorite Mulan is, in many ways, a film about characters attempting to control gender roles, internal conflict, and even warfare. Control, of course, is an element completely lost as a result of the COVID-19 pandemic, and the world of cinema is no exception. Disney realized this after moving the film from its original July release date to another in August, and then, finally, to its Disney+ streaming service.

While watching Mulan at home, it is almost impossible not to wonder what the experience would have been like on the big screen. An ambitious, large-scale epic directed by Whale Rider’s Niki Caro, Mulan is without question a well-made success. Yet it almost certainly would have been more impressive––and more involving––at the cinema. This is not a failure on the part of Caro or anyone involved in the film’s creations, and it is of course understandable why Disney made the move to the decision to bypass the cinema experience and attempt to control a timeline that had become uncontrollable. After seeing how expertly Caro and company brought Mulan to the screen, however, that decision seems like a mistake.

Interestingly, of all Disney’s recent live-action adaptations, Mulan is probably the one that would have benefited most from the big screen. That does not mean the film is overly reliant on spectacle, though. There is real emotion here––none of the cartoonish nonsense of the admittedly enjoyable Beauty and the Beast or (much less enjoyable) The Lion King. Mulan takes the animated film and brings to it a new, more serious approach, and it’s the right one for this material. While Guy Ritchie’s Aladdin felt like a stale repetition, Mulan feels fresh.

Casting is a big reason why this remake succeeds. After the aforementioned opening with a younger Mulan, actress/singer Liu Yifei steps into the role and gives a fine performance as a young woman with a potential for greatness, but a reputation for insolence. The ever-splendid Tzi Ma (The Farewell) is her loving father, a veteran of the Imperial Army who is called back into military service. His response when asked whether he has a son who will enlist––“I am blessed with two daughters”––is memorably delivered with warmth and pride.

Seeing her father’s frailty and knowing that she has physical and mental gifts, Mulan takes her father’s place, enlisting in the Imperial Army undercover as a young man named Hua Jun. She trains with a colorful group of fellow recruits, under the watchful eye of Commander Tung, played by the inimitable Donnie Yen. These preparations for warfare are the result of invaders led by Bori Khan (Jason Scott Lee) and assisted by a shape-shifting witch, Xian Lang. The latter is played, with great relish, by wondrous Farewell My Concubine star Gong Li. Meanwhile, Jet Li plays the besieged Emperor of China. That’s right––Donnie Yen, Gong Li, and Jet Li in the same impressive ensemble.

Hua Jun’s training takes up a significant chunk of the film, and this section in particular features nice work from Liu Yifei. She gives a complex performance as a woman unsettled at living a lie, but confident in her reasoning. The eventual battle scenes here are not gory, but surprisingly violent. As Whale Rider and even The Zookeeper’s Wife proved, Caro handles action with aplomb, but the scale of Mulan is quite different. One sequence in particular––a triumphant scene of Mulan galloping into battle, reborn––is as genuinely stirring as any in recent cinema. Nothing in the remainder of the film can quite match it. The script, by Amanda Silver, Lauren Hynek, Elizabeth Martin, and Rick Jaffa, loses steam toward the end, although the final moments are suitably moving.

Will kids be intrigued by Mulan’s journey? That is a difficult question. Young fans of the animated film may miss the humor and songs, while others may find the intensity unsettling. Case in point: My ten-year-old son and six-year-old daughter lost interest early in the film. Yet I imagine both will revisit the film someday and find it involving. I look forward to that day––especially when my daughter can rewatch the film with new eyes, and find inspiration in this tale. Perhaps the scale of the film was lost for them at home, amidst iPads and Legos. Families contemplating the $30 spend should think about their kids’ attention spans and tolerance for a rather serious tale that misses the original’s charm, but makes up for it in live-action scope and scale.

The best audience for Mulan is likely the adults who vividly recall watching the animated film in theaters and again and again on DVD. We are a long way from Eddie Murphy voicing a sassy dragon, and that’s a good thing. Mulan deserved this serious interpretation, but it’s too bad audiences will not have the chance to see it as the filmmakers intended. The character of Mulan herself reaches her full potential once she stops attempting to control her gifts––and perhaps that’s a lesson Disney should have taken to heart. While waiting for the world to see Mulan on the silver screen might have been the best plan of attack, that was not the studio’s decision. As such, audiences are advised to enjoy the experience for what it is and try not to ponder what could have been