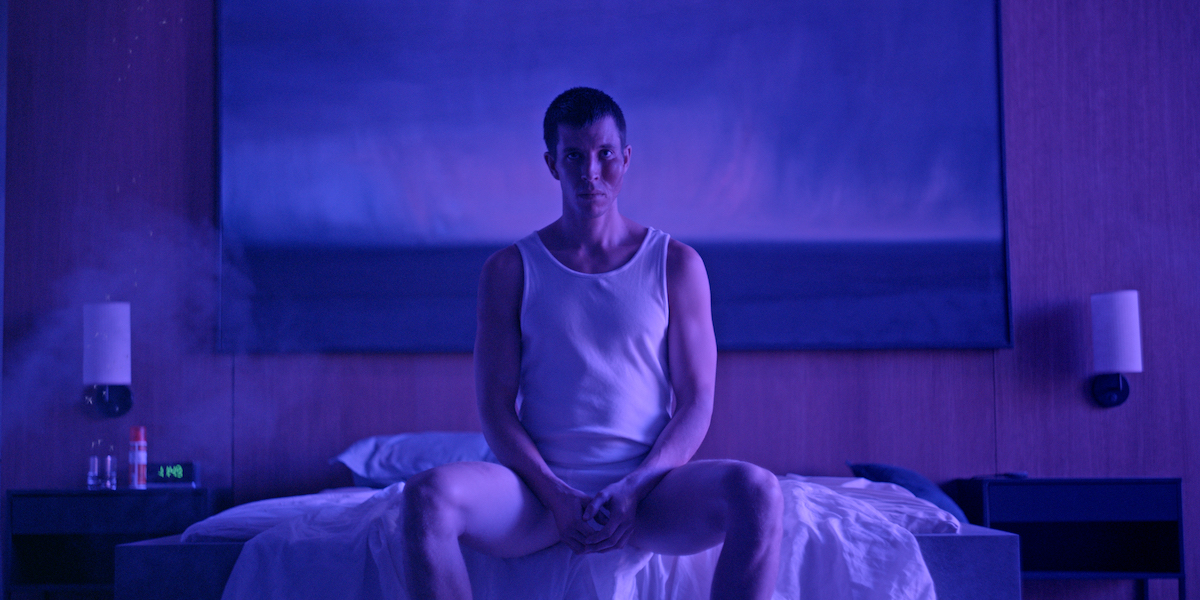 Grafting Cronenbergian body horror onto the 2008 financial crisis, Filip Jan Rymsza’s horror-tinged Mosquito State takes its title very literally, beginning with the up-close birth of a mosquito and ends, quite appropriately, with an insect apocalypse as the stock market collapses. In-between those potent images, however, is a work with plenty of grandiose ideas and little sense of how to communicate them. Thematically muddled but visually stunning, Rymsza’s film serves as a warning call for those who prioritize form over all else, elaborately staged shots doing little to hide the ever-growing narrative inconsistencies.

Its ostensible protagonist is Richard Boca (Beau Knapp), an investment-firm “golden goose” whose finance-bro colleagues openly disdain him. He’s awkward, introverted, and something of a wunderkind: his algorithm “Honeybee” is both incredibly lucrative for the firm and modeled on colony-collapse disorder, a phenomenon wherein the worker bees disappear, leaving the queen bee with outsize resources to tend the rest of her colony. Split into illuminated chapters—“the blood meal,” “the egg,” etc—that mimic the lifespan of a mosquito, the first follows Richard as he meets Lena (Charlotte Vega) at a party. While Richard is withdrawn, saying little to Lena, she takes a liking and eventually follows him to a cavernous apartment.

Yet Richard’s timidity eventually ruins the evening as Lena goes back to her life and he is forced to contend with a mosquito that has been following him ever since. Soon that mosquito turns into many, slowly taking over Richard’s apartment as his body deteriorates from the bites. Rymsza overlays Richard’s consumption with the lead up to the 2008 election, reruns of The Apprentice adding effect. Richard becomes mesmerized by the mosquitos and tries to rethink his algorithm, trading the habits of one species for another.

Remaining chapters prioritize the visual of Richard’s deteriorating body—rendered through bites and golf-ball sized sores—more than any type of commentary on financial investments and excess. While Richard is seemingly the only one at his firm who notes impending disaster, modulating his algorithm to stave off financial ruin, Mosquito State never truly develops its central metaphor. By the time the insects have fully taken over, as Richard pumps up the heat and humidity in his apartment, any connection between career and colony are rendered moot.

Yet even with an underdeveloped script, Mosquito State is truly a memorable freakout—one that should not be watched with food anywhere in sight. Beginning with a cartoonishly animated birth of CGI mosquito, which cinematographer Eric Koretz’s camera tracks from the sewers of NYC into the firm’s lavish party, Rymsza often zooms into the microcosm of a mosquito’s life cycle in gloriously nasty detail. A pulsing electronic score from composer Cezary Skubisweski and brutalist architecture design by Marek Warezewski make Mosquito State watchable if only for its aesthetic design.

And Knapp—whose previous work in Southpaw or The Good Lord Bird  doesn’t exactly scream mild—gives a convincingly restrained performance, playing Richard as so cripplingly shy that he latches onto attention in any way possible. If Vega’s Lena comes across as a cypher, more plot mechanic than fully realized person, that’s seemingly the point.

Mosquito State may fall short in synthesizing its odd fusion of body-horror and cautionary Wall Street tale, but it’s nevertheless a memorably gross film that shows Rymsza should make work more often—his last feature was over a decade ago, and he has since, oddly, become something of a go-to producer for films by and about Orson Welles (The Other Side of the Wind, They’ll Love Me When I’m Dead, Hopper/Welles). He knows how to visualize a scene; if only they formed something more coherent.