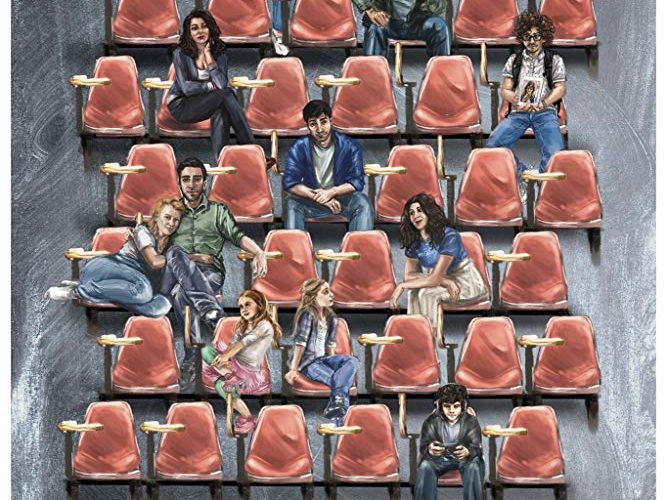 If anything, Safe Spaces gets right what it’s like to be on the lowest wrung of the career ladder in academia. Justin Long stars as Josh, a creative writing and drama professor who in the first scene shockingly grills a student about a sexual experience she tiptoed up towards in her writing, turning the whole thing into something he with decent intentions thought was provocative. Speaking from experience, it’s an exercise that’s commonly used in creative writing or filmmaking–asking “well, what next”–although he should have known better. His behavior turns him into persona non grata amongst students as the incident spirals out of control when a sexual assault survivor takes the case up with his department.

Written and directed by Daniel Schechter, the film is a fascinating and often cringe-inducing study of millennial urban life in a #MeToo era. Josh, a participant in the gig economy by virtue of his lack of job security, defends himself from triggered allies as he uses teaching tactics that were likely once acceptable. They might still be, if it was in the hands of someone with more experienced to better navigate the conversation. This comes in the middle of a family emergency as his loving grandmother (Lynn Cohen) resides in hospice care, requiring Josh to grow up.

Safe Spaces is an immersive comedy that builds sympathy for Josh while also not excusing his behavior. He’s told by the administration to apologize to a student that has stopped showing up to his class, leading to a confrontation on a cell phone camera designed only to provoke and disrupt. The film is not without ire towards younger millennials that only see a white guy with a sphere of power restricted to the classroom, rather than a complex human being. As it turns out, the typically one-note Justin Long turns out to be perfectly cast. In the end, Schechter offers a graceful conclusion in a finely-crafted scene built on genuine empathy and understanding.

While billed as a family drama (and there is plenty of that), Space Spaces offers plenty of uncomfortable laughs creating a tone that’s uncompromising: a coming-of-age story at the edges of the chaos. Beyond his grandmother he’s also dealing with sister Jackie (Kate Berlant), a podcaster with a mild drug problem who moves in and overstays her welcome at his apartment. His successful brother David (Michael Godere) remains the only stable force in the family, yet he’s faced with multiple distractions including kids of his own. Mother Diane (Fran Drescher) adds genuine weight to the film’s “b-story” as does her ex-husband (Richard Schiff) who, despite some convincing, comes around to supporting his kids through this time.

Safe Spaces is an astonishingly perceptive nightmare that will undoubtedly provoke conversations within the academic community and might very well become required viewing as part of faculty on-boarding. For those outside of that bubble it may be read as an endearing send-up of white, heterosexual patriarchal privilege that is deeply ingrained in the culture. While Long’s Josh is not nearly as intentionally cruel as the men of Neil LaBute’s explosive debut feature In The Company of Men on the surface, he learns a valuable lesson about privilege, power, and victimhood the hard way.