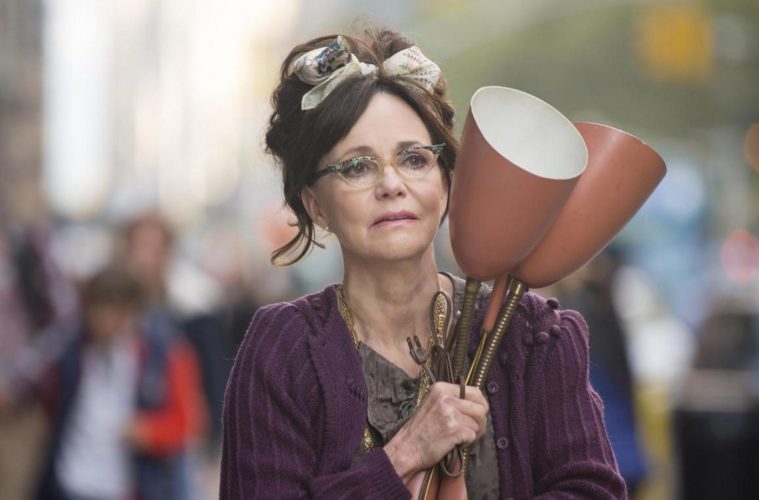 As odd as it is endearing, Michael Showalter’s Hello, My Name is Doris is a rare character-driven comedy that hinges upon the believability of its central relationship between Doris (Sally Field), a shut-in who has taken care of her recently departed mother, and an art director John (Max Greenfield), 34 years her senior. Inspired by a self help guru (played by Peter Gallagher), she pursues a relationship with John, although her long-term plan is uncertain. Living in the moment for the first time, Doris is sympathetic in what seems to be a realistic portrait although, truth be told, I cannot be sure too sure of this as a 30-something man. If anything, Showalter demystifies an aspect of fantasy without much context to Doris’ history behind her last ten years. Cutting his teeth in sketch comedy, individual scenes have the kind of short term pay-off you’d find in that context — while Doris may be the punch line in a sequence, she’s taken seriously overall.

The second feature directed by Showalter, adapted from a short film by Laura Terruso, the director marries themes previously explored in his 2005 feature The Baxter with a more nuanced character study. Masterfully portrayed by Field, Doris Miller is out of place despite harboring tenancies and wardrobes that the 20/30-something hipsters of Williamsburg around her aspire to have. Simply put, she fits in more easily than the 40-something couple at the center of While We’re Young. A cultural clash ensues as Dorris tries, with the help of her best friend’s (Tyne Daly) granddaughter (Isabella Acres) to discover more about the object of her affection John via Facebook stalking. Firing on all cylinders is the film’s pitch-perfect second act as Dorris enters Williamsburg hipsterdom, finding herself as the cover model for John’s favorite electronica-alt rock band’s new album. Doris, it seems, fits in as the kind of authentic person John’s pals and followers of his favorite band are craving, with the ideal wardrobe, glasses and all. Unaware of social norms, Doris become a subject of fascination for coworkers and Williamsburg kids alike. The film’s fatal flaw is that it is never quite clear what she is getting out of this exchange beyond her desired romance with John. The third act tidies things up a bit in a way we’ve seen before as she metaphorically moves, but Doris’ intentions are not quite as developed as those of her friend’s thirteen-year-old granddaughter, whom she takes dating and social networking advice from. When you’re thirteen, it’s fine to not have a plan, but Doris is not quite sure what she wants: a long-term relationship or a quick tryst in the supply closet at work.

For his part, John is an appealing yet thin character, perhaps much like the manic pixie dream girl trope diagnosed several years ago by critic Nathan Rabin. In this respect Hello, My Name is Doris may be revolutionary, turning the tables on the trope while highlighting the desires of a woman not ready to give up despite years of celibacy. John is perhaps the first guy to do it for her in a long time and an additional development on this front could have led to a richer portrait of Doris.

Like The Baxter, Hello My Name is Doris is largely good natured, taking a basic premise and turning it on its head, if ever so slightly. As a comedy it breaks multiple taboos concerning women of a certain age, even if the process of doing so could have been more inspired. Individual scenes delight, while others seem implausible but shouldn’t outright be dismissed as cringe-inducing. After all, men of a certain age date much younger women all the time on screen.

While the venture to explore desire, infatuation and a good ol’ crush in a realistic way (complete with silly fantasies) demystifies Doris in the present beyond a comedy sketch, several curiosities regarding Doris’ youth remain off screen. Sally Field is brilliant here, but a richer character study is warranted from the Showalter and Terruso’s script. Posing more questions than it answers, Hello, My Name is Doris is fine if taken at face value, but beneath the surface is a far more interesting film that could have been made from the same material and premise. Showalter never quite seems to balance the light and the dark as masterfully as Field plays Doris.

Hello My Name is Doris screened at the Montclair Film Festival and opens on March 11th.