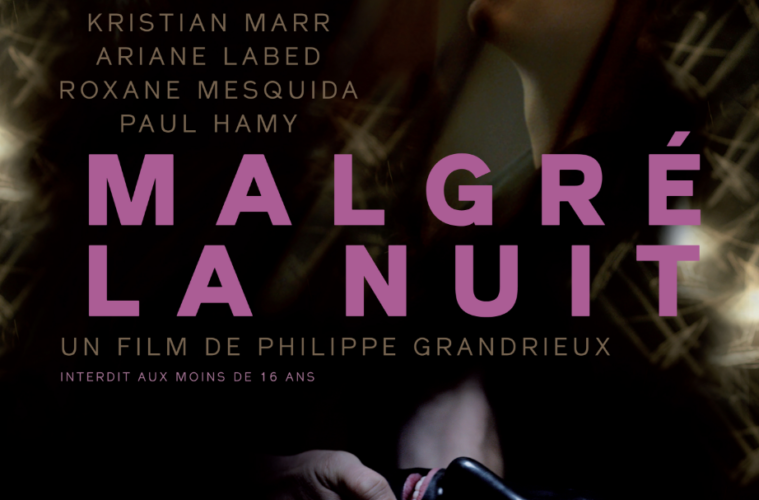 Philippe Grandrieux’s Despite the Night is a relentlessly morose, miasmic thing that, like much of his work, alternately seeks to narcotize and brutalize its viewer into submission until the distinctions between agony and ecstasy, tenderness and violation, are indistinguishable. Grandrieux is, in many respects, a wildly contradictory figure: a tough sell for most audiences; an easy pitch for prospective fans (the maximalist Denis? the haptic Lynch? the narrative Brakhage? the goth Malick? etc); a niche artist even in the realm of “festival cinema”; yet (for instance) a favorite of Marilyn Manson, who once recruited him to direct a music video. In a skeptical piece written for Reverse Shot, Michael Sicinski characterizes Grandrieux as the Scott Walker to Gaspar Noé’s Trent Reznor — the shadowy, marginal alternative to the celebrity provocateur. Facetiously, Sicinski continues, “To judge from his mystique, Grandrieux is that awesome band nobody likes yet, and you secretly hope nobody discovers.” The cynic could just as easily say that Grandrieux shares that hope of remaining cloaked in obscurity, but whatever vagaries of distribution and exhibition have limited his audience, the site-specific nature of his aesthetic renders his oeuvre (installation / gallery pieces exempted) impossible to envision – even more than the most-vaunted examples of “pure cinema” – outside of a cinema space. These are films that exploit the darkness of the theatre environment, with the distracting glow of exit signs ideally blocked out.

Despite the Night is at once a departure and continuation for Grandrieux, and that difference and sameness is apparent from its opening moments. A distended prelude features his usual presentation of faces and bodies as abstract, with Francis Bacon-like hues of pale flesh against a dark, dimensionless void, indistinguishable as interior or exterior. This time, however, whisperings of non-diegetic dialogue – isolated on the soundtrack for a kind of auditory sensuousness – introduce its principal characters and establish a vague sense of motivation and exposition. We learn that Lenz (Kristian Maar) is in town searching for his ex-lover, Madeline (Roxane Mesquida), though he’s sidetracked by the presence of Hélène (Ariane Labed), a woman with a shadowy past; that a “shadowy past” can even register in this already-enigmatic context is a testament to the clarity Grandrieux is capable of.

In narrative terms, Despite the Night is the most conventional of Grandrieux’s films, but to say that it’s “less experimental” only goes to show that “experimental” and “conventional” are two ends of false binary. “Some things are only experienced by thinking and living abjectly,” Hélène tells Lenz at one point, and this line sums up Grandrieux’s attitude to the noir tropes and archetypes he is working with here: he evidently sees genre as abject, and only useful insofar as it allows characters to be vessels for audio-visual renderings of pure sensation. At the same time, this is his most character- and performance-driven picture by a long shot, with numerous, ostensibly naturalistic scenes of human interaction, and his trademark jittery, blurry camerawork has accordingly settled to do justice to his actors. As Leni, Labed meets the emotional and physical demands of her role head-on, but Maar’s awkward English-language line readings do a lot to soften this film’s intensity. As such, it’s a more lopsided, “impure” endeavor than Sombre (1998) or Un Vie Nouvelle (2002), as well as a more unwieldy one at 155 minutes.

There is an inherently voyeuristic quality to all narratives in which a seamy underbelly of a city is exposed by one man’s naïve, romantic quest, and through sheer duration is one way Grandrieux pushes that innate prurience to its logical extreme – the film’s queasy violence (sexual and otherwise) is at times so elongated and tactile that one starts to feel for the actors more than the characters, and this is surely by design. The sentimentality of its love story is pushed to an equal extreme, and, for all its transgressions, Despite the Night could be considered Grandrieux’s answer to Frank Borzage or F.W. Murnau’s elemental melodramas of transcendental love; in its story of vagabond lovers, replete with dreamy melanges of superimpositions, it especially recalls Murnau’s Sunrise.

An instance of the aforementioned technique makes for the film’s most stunning moment, in which what first appears to be a roving shot of velvet upholstery is soon revealed to be an extreme close-up of a fish’s scales, which is then juxtaposed with the craggy face of a gangster as he launches into a monologue comparing human and fish instincts. The words are boilerplate, almost like one of Robert Loggia’s dialogues from Lost Highway played straight, but the interplay of dueling textures – scales drifting, folding and contorting, overlaid with the image of dimly lit aging skin visible only as a mass of wrinkles and pores – manage to coerce the latent profundity of these words to the fore.

That moment is Despite the Night in a nutshell: if its dramatic dimension isn’t entirely convincing or satisfying, it nonetheless achieves rare moments of sublimity by taking a headlong plunge into the sensory world of its mysterious, broken characters. Few filmmakers are as willing to explore the textural possibilities of narrative cinema, and Grandrieux once again makes the dichotomy of “form vs. content” look very false indeed.

Despite the Night screened at the Melbourne International Film Festival and is seeking U.S. distribution.