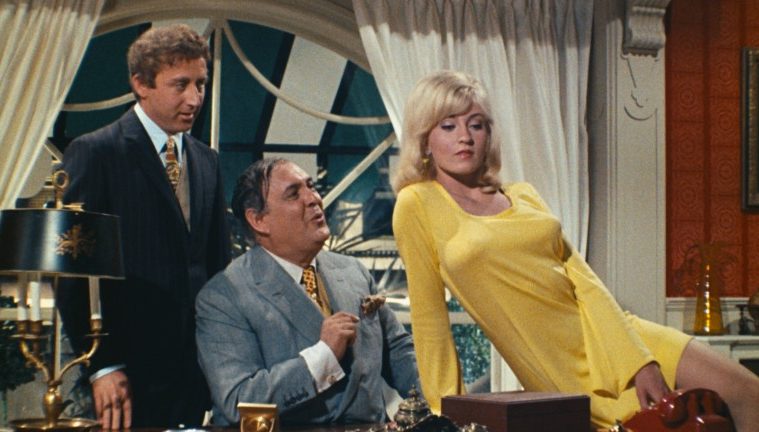 “A producer can make more money with a flop than with a hit!”

To celebrate its 50th anniversary, Mel Brooks’ 1968 classic comedy The Producers is getting a rerelease on the big screen, and for one night only. After a famously troubled and controversial premiere in 1968, the film has since evolved from cult classic status to being regarded as one of the greatest comedies ever made. In 1996, The Producers became an official selection of preservation by the National Film Registry, and in 2001 it placed 11th on AFI’s list of all-time best comedies. To celebrate the film’s seemingly evergreen cinematic footprint, following a U.S. event earlier this month, TCM will be releasing The Producers into U.K. cinemas on August 5th.

The film follows failing theater producer Max Bialystock, played by the great Zero Mostel, as he juggles multiple courtships with wealthy older women in order to remain financially supported. When his anxious accountant Leo Bloom, played by Gene Wilder – who received an Oscar nomination for his role in the film – analyzes Max’s finances, he makes a critical discovery: a way to make a fortune from a doubtlessly awful play. Their play of choice? “Springtime for Hitler.”

Mel Brooks won the Academy Award for his screenplay for The Producers, and as his directorial debut, the film set the stage for his later projects, such as the notorious Spaceballs and Blazing Saddles. Brooks adapted his film into a Broadway musical in 2001, which in turn was adapted into a 2005 reboot from director Susan Stroman. Studiocanal and Rialto Pictures’ 4K remastering of The Producers, along with an introduction by Mel Brooks, will hit U.K. theaters for one night only on August 5th, courtesy of TCM. Check out the new trailer below.