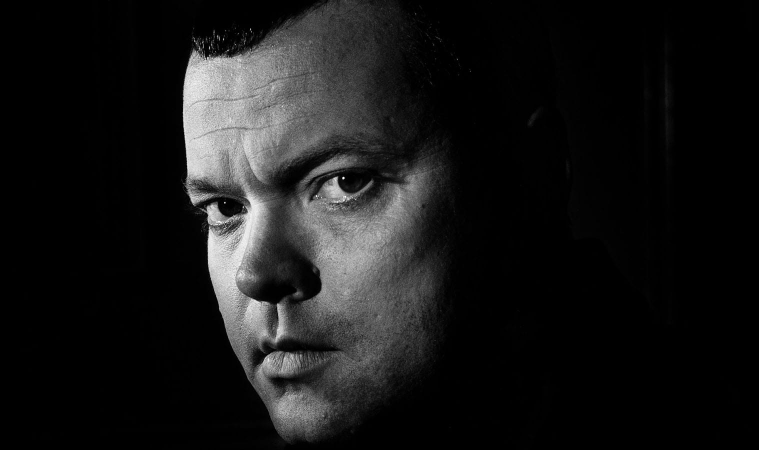 Mark Cousins on Orson Welles’ Trumpian Characters, the Era-Defining Films of this Decade, and Ozu’s Sexuality

What can we tell about an artist from the places they’ve been, the films they’ve made or the sketches they’ve drawn? And what if that person happens to be Orson Welles? Such is the basis for The Eyes of Orson Welles, the latest time-hopping feature-length video essay from film historian and critic Mark Cousins. Similar to his previous work in many ways, Cousins imagines a correspondence between himself and Welles as he goes through a treasure trove of seldom seen sketchbooks that the larger than life movie trailblazer left behind.

The Eyes of Orson Welles premiered in May at the Cannes Film Festival to great acclaim. It screened last week at the Karlovy Vary festival in the Czech Republic where Cousins was also sitting on the Grand Jury. We caught him in sprightly form in the jury conference room at KVIFF, to talk Charles Foster Trump, Agnès Varda, and what an update to The Story of Film (his epic, singular 15-hour film history of the artform) might look like.

I was at the premiere of Vulkan the other day and during the introduction the producer said that they wanted to premiere at Karlovy Vary because it’s an “A festival” that also has a human quality to it. I think I agree with that.

Well, I’m on the jury here and I also have a film here and over the past they’ve shown my films here. I think this is might be my fifth Karlovy Vary and I really like it. It’s just right what the producer said. Also because of where it is in the world, you know, it’s further east then a lot of the big European festivals and it’s got more of an Eastern perspective on things, which is really valuable as well. Things like the retrospective here, The Baltic Poetic Documentaries–who else would do that? No other festival would do that and I think often a festival’s identity is given by its retrospectives.

Your film here is The Eyes of Orson Welles. How would you describe its style to someone unfamiliar with your work?

I used to make a very observational style of documentary; you know, a sort of classic BBC style, and then I got into a more essay style. I saw the films of Agnès Varda and Chris Marker so I decided to make films which are kind of documentaries but with a poetic use of language. You know, with no interviews. I shoot silent, for example. No sound is recorded on location. To try and make a documentary style of cinema that isn’t reportage, isn’t journalism, is more in the poetic side.

The film imagines a correspondence between you and Welles. It’s not the first time you’ve used this device, although perhaps never on quite such a scale.

Yeah, I’ve done it quite a lot. You know, I’ve always been slightly resistant of the kind of expert–usually white male–worldview. You know, He did this, he did that. I always preferred you did this, you did that because it’s more intimate. It’s less claiming to be objective; it lets you get closer to the subject. And when you talk to a person, it changes how you write. It allows room for little sly jokes, I think, or emotion.

Humility as well I think.

The biggest laugh the film got at the premiere in Cannes was when you informed Welles that Charles Foster Kane is now in the White House. What do you feel are the comparisons between the two?

[Laughs.] Well, you know… I was trying to make a sort of film that was Welles for the era of Trump. Boy, do we need Orson Welles to make a Trump film! You know, Donald Trump admires Citizen Kane. He thinks that Charles Foster Kane’s a great guy. And he once said that he admires Orson Welles because he has great taste in “skirt”–meaning Rita Hayworth, I think, or Dolores del Río.

And if you think of these big figures that Orson Welles made films about: Mr. Arkadin, Charles Foster Kane, even Macbeth in a way, they’re big tragic empty fascists, and there’s a bit in my film where there’s an Archibald MacLeish play, and there’s the beast and the fascist characters coming in closer and closer and they raise his mask and there’s nothing behind the mask. And I think there’s something Trump-like in that. It’s all façade, it’s all gold buildings and I’m not sure what kind of humanity is behind it. And I think Welles would have really got that massive barouche emptiness. That dangerous emptiness.

You speak a lot about scale, or rather Welles’ eye for scale, shooting from below and so on. How does that relate to the scale of the man himself?

There’ve been lots of theories about why Orson Welles shoots low and upwards. A lot of people say it’s because of his theater work but when I was in Chicago I thought Chicago was the first modern city of tall buildings and that was his formative city and surely it’s something to do with that as well. He talks in interviews in France, and people say, “Why do you do this, why do you use this 18mm lens?” And he said, “To be distinctive. If everyone else was using an 18mm lens,” says Welles, “I wouldn’t.”

I’ve got one of his boots here, seeing as we’re talking about the size of the man. [Produces a black leather boot.] Look at that for an ankle, it’s nearly twice as big as mine!

Welles had a strong connection to Ireland, which we see in the film. How much of that was a fresh discovery?

Yeah, I had been to most of those locations but not looking through the eyes of Welles. So to go back to Inishowen for however months it was, to learn that he probably lost his virginity there–that he discovered something about life there–it made a difference. Then I started to realize that he was a white Anglo Saxon Protestant, right? But which cultures did he fall in love with? Mexico. Spain. Morocco. Ireland. Not Scandinavia. Not the Protestant-y, cool, intellectual parts of the world but the hot-blooded, the passionate, hard drinking, hard living parts of the world.

I think they know how to drink in Scandinavia.

[Laughs.] That’s true, but there was definitely an attraction to the Celtic world and the Arab world.

Do you think he would have been interested in any of the filmmakers around today?

Welles? There are certain filmmakers who are in the spirit of Welles, in the shadow of Welles. I think Paul Thomas Anderson for example but when you think of Welles’ own taste in cinema, John Ford for example, this sort of neoclassicism. I think personally if Welles had seen the films of Kira Muratova, who died a couple of weeks ago, I think he would have adored her work. I think in terms of things like foreground/background; the baroque; those big traveling shots that she did in Kiev in the Ukraine, I think he would have admired her. You can draw a line from Sergei Eisenstein through Orson Welles to Kira Muratova.

I’m not familiar with her work, I must admit.

Well, I mean this is the problem. She was one of the world’s greatest filmmakers and lots of people in the west hadn’t heard of her and I’ve been writing and tweeting about her for years and about two years ago I tweeted: “Now that people are finally talking about Agnès Varda properly, two decades late, I said, are we going to wait until Kira Muratova dies before we give her the major retrospectives or for the honorary Oscars, all of this sort of slightly rubbish stuff but it’s important.

Why do you think it is that Agnès Varda is talked about more these days?

I think it’s the honorary Oscar that’s done it. Loads of people behind the scenes lobbying–and I was one of the lobbyists, not that my voice counts very much–to give her the honorary Oscar. And that gave her visibility. You know people in the know knew that she was great from the late 1950s. She made the first great French New Wave film for example. But that kind of crossover thing I think really happened because of the honorary Oscar.

I re-watched The Story of Film recently and I spotted that you had put her debut film as the first in the French New Wave sequence.

Yeah, La Pointe Courte. It’s incredible. I should have had more of her in there, you know.

Is that something you’ve ever thought about adding to? What would make the cut?

Yeah, I toy with the idea. It’s coming up on ten years since I did that. Maybe yeah, I mean there’s things like Jonathan Glazer’s Under the Skin and you know those film made by those Harvard ethnographers, there was one called Leviathan?

Yes, and there’s one here that they made called Caniba. I saw it in Venice and we gave it a prize at the Venice festival. I think they are doing stuff that’s deeply original. When I saw that Leviathan film where they had GoPros attached to birds I thought, “Oh my God, Méliès would have loved this.” That’s what we were looking for in The Story of Film, these sorts of era-defining types of filmmaking. I think there’s been a lot of really good stuff.

How do you feel about The Act of Killing?

Yes. I mean, I have a few ethical problems with The Act of Killing but I think it is kind of great, yes.

The core of your new film is a collection of Welles’ drawings. Are there any other filmmakers you know to have sketched quite so much?

I’m really into African cinema so if Youssef Chahine drew I’d love to see that stuff. If Safi Faye did I’d love to see her stuff. Ozu drew a little bit, if Mizoguchi drew that would be so interesting. I’d love to come across a cache of his things.

Are Ozu’s similar to his set design?

They’re little minimalist sketches. There’s nothing too elaborate there. They’re more just little frame designs and things. There’s not a lot in there. He didn’t draw for pleasure. Orson Welles clearly drew for pleasure, and frustration, and for everything in between in a way. So Welles, as we can see now, was a compulsive drawer, he couldn’t stop himself, whereas Ozu wasn’t.

Ozu’s fascinating. I mean I think we still don’t understand Ozu. Have you been to his grave in Japan?

Did you bring him some beer or something?

I brought him a little bottle of Jameson.

I mean that kind of ultra minimalism is aesthetic. And yet that maximalism in his life. That kind of incredible drunkenness. He was clearly gay and it’s still not talked about in Japan. I think it’s sort of considered a taboo still. So I think more needs to be said about him. The relationship between aesthetic minimalism and sort of alcoholism and sexuality and a kind of passionate determination to make films.

You know one of my favorite filmmakers is Kinya Tanaka–you know the great actress–and she was in loads of Mizoguchi and Ozu, she was also a great director. He supported her massively. She was the only director in post-war Japan who was a woman. That kind of side of him… just… far more needs to be done on Ozu. Someone needs to write a new account of Ozu and shake off some of the politeness in the way he’s talked about.