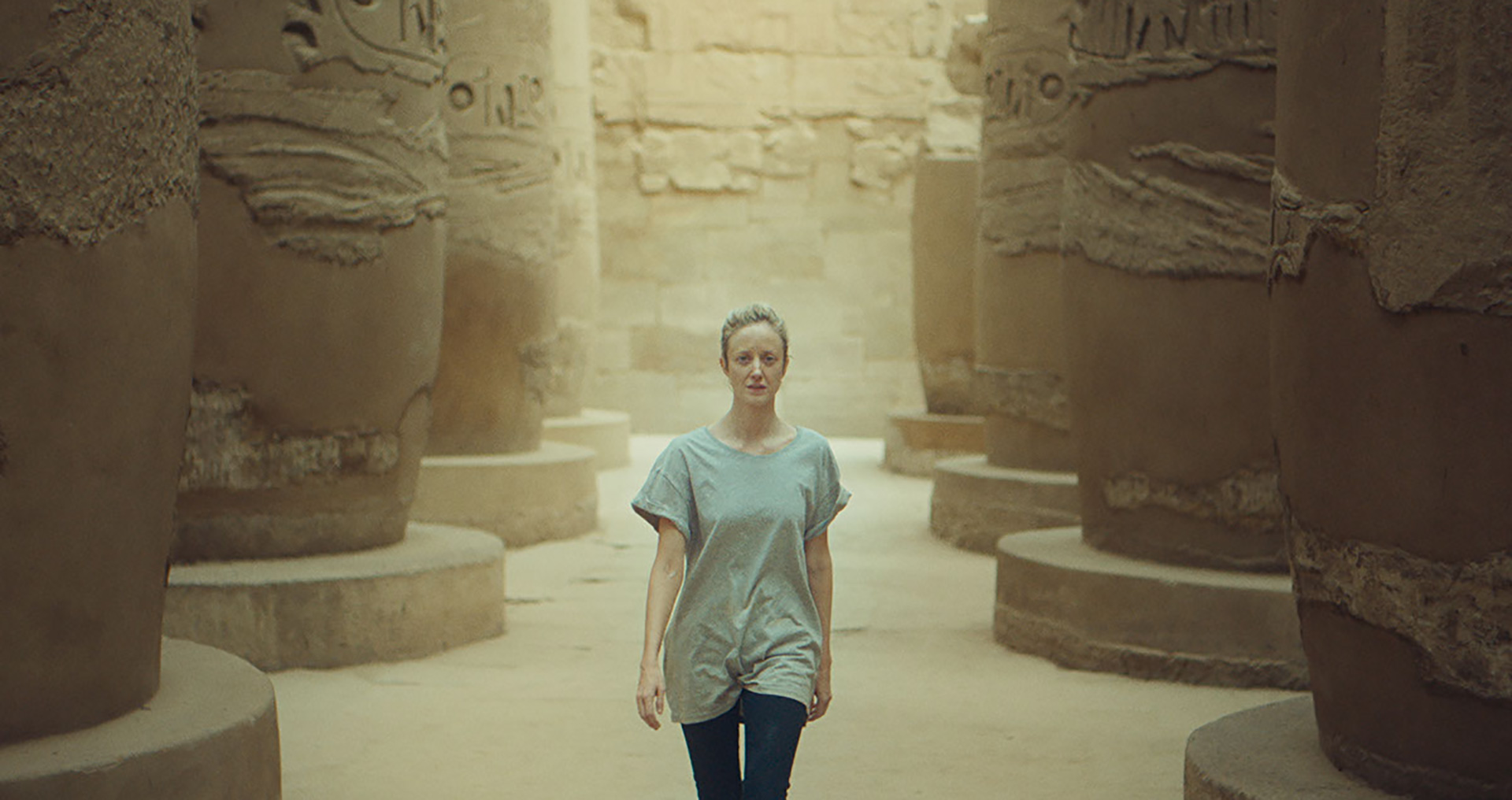 After spending two decades as a British aid worker throughout a war-torn Middle East, Hana (Andrea Riseborough) chooses Luxor as the destination for her leave. Situated on the serene east bank of the Nile, this Egyptian city is the place where her work began with bottomless promise for the future. She found love there in her twenties, and perhaps a return might help resettle her from the psychic horrors she’s since endured. But there’s little possibility to fight the cynicism caused by humanity’s current, brutal decline.

This is why writer/director Zeina Durra needed to tell the story at the center of her sophomore effort, the succinctly titled Luxor. What better juxtaposition to the darkness is there than a civilization that sought to hold light as a conquering force against evil? As Hana tours the city temples, locals sit in quiet, heartfelt prayer while foreigners speak of the cleansing ability of this place beyond the magic of standing in arenas of great historical significance. It almost becomes a joke that everyone she passes tells her to visit Abydos because it “would do her good.” She hadn’t realized that pain and depression rests so visibly upon her shoulders.

So it does prove jarring when a genuine smile lights up her face upon seeing the man who calls out her name on a boat she’s using to return to her hotel from the city. Sultan (Karim Saleh) is a piece of her own history as the man she loved and tried so hard to stay connected to despite their careers forcing them to go their separate ways. She provided medical assistance where needed while he broke ground on new archeological digs. Sultan is a symbol of what was and what could have been if fate, circumstances, and choices were different. He’s therefore both the best and the worst thing she could have found — conjuring both happy memories and devastating regret.

The ways in which Hana deals with his return becomes the entirety of the film. Each new day arrives with its own chapter heading before sending her to ancient sites as she thinks about lost emotions, and falls into an introspective vulnerability that simultaneously risks destruction and offers salvation. It’s one thing to recharge her proverbial batteries before going back into Hell, but it’s another to try to reclaim a piece of herself that she thought was gone. Doing so won’t be easy, though. Especially not when she’s undecided whether she even wants that relationship back. Because if there’s anything she’s learned during these past twenty years, it’s that comfort and peace are an illusion. Good things have a tendency of turning bad.

What Luxor strives to offer is the room to hope that it’s even possible to return to that previous state. Is nihilism about the the future all one can afford? For many, it is. Sometimes that level of distrust is the only thing that keeps someone safe from the perpetual cycle of tragedies that consume cultures, communities, and faiths. This is the case with Hana. And, to therefore see Sultan again is to see him through vastly different eyes. Love is but a fantasy.

So don’t expect your usual romantic drama happily-ever-after. Sultan is a figure as abstract and unobtainable as the amulets of Egyptian goddesses found buried in the sand. Is what he stands for something Hana can pursue without ruin? Is the potential of heartbreak now when she’s older and more worn down worth the chance it will work out?

That translates into a slow, methodical quest unfolding as much behind Riseborough’s eyes as it does on the screen. It’s days of Sultan doing his best to inject himself into her daily routine, only to find her pushing him away to maintain her barrier. As such, Durra ensures the gorgeous sites her characters walk through are presented with as much austere beauty and potency as they possess in real life. This is an adventure of the soul—a spiritual and philosophical journey towards clarity at a time where it’s in very short supply. The most kinetic moment is therefore when she can simply stop thinking and have a drunken dance before she needs to return to the larger questions.