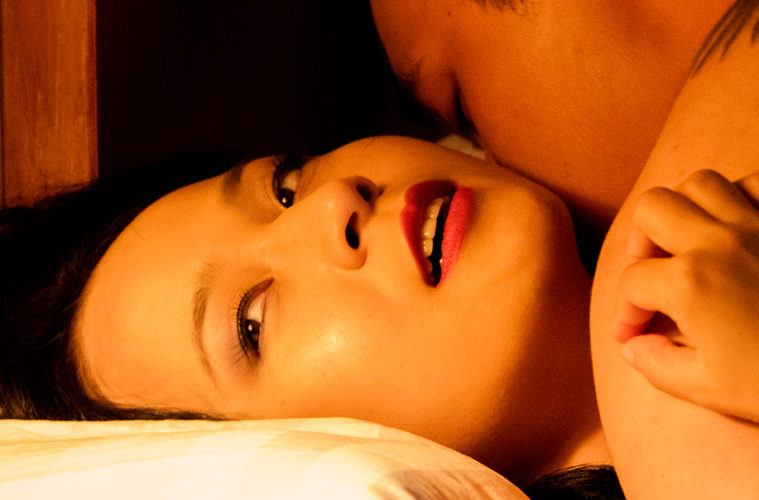 [LFF Review] In the Room

Love and lust across a century form the backbone of In the Room, the latest film from director Eric Khoo (Tatsumi, Be with Me). An anthology feature with five main vignettes (titled “Rubber,” Listen,” “Change,” “Search,” and “First Time” in the end credits) and a few recurring revisits to the exploits of characters who have come and gone, the entire film is set within the confines of one Singapore hotel room, bar the occasional meet-cute or tearful lament in the corridor right outside.

The film opens on the initially sinister sight of a distressed figure in a decrepit incarnation of the room, looming over a man and woman having sex on a bed, singing to himself, “This was once a grand hotel. Now it’s in ruins.” This isn’t a horror film, but a later vignette will reveal this figure is a ghost, that of the songwriter of a late 1960s/early 1970s band who dies in the room of an overdose after falling in love with, and writing a song about, a hotel maid he has chatted with during New Year’s revelry. The character’s name is Damien, and the film is dedicated to Damien Sin, a musician and author who died of an overdose in 2011, and whose screenplay for the film Mee Pok Man helped launched Khoo’s directing career in the mid-90s. The film’s Damien reappears in all but one of the anthology’s other stories, mainly to make his presence known to his maid love who cleans up the various messes left behind, but occasionally to project some influence over the disputes of the other players – there’s one touch that can’t help but recall a gender-flipped version of Dan Aykroyd’s bedroom encounter in Ghostbusters.

The film’s other stories include a Singaporean man and an Englishman bidding farewell as the changing political climate forces the former’s return to Britain; this kicks the film off post-opening credits with a black and white aesthetic that’s abandoned for colour as the next bunch veer closer to contemporary times. Another sees a trans woman and cis man enjoy one another the night before surgery that will permanently change the machinations of their physical intimacy. This segment has one of the funnier allusions to Singaporean society, in which the woman is insistent that the country’s current president has history as an innovator regarding the construction of artificial vaginas.

One tale, one which sees some later character revisiting akin to the case with Dennis, concerns the tribulations of an adulterous affair, where the married woman can’t quite make the leap to leave the husband she doesn’t love and start a new life with her new lover beyond Room 27. The repercussions of her actions are addressed by Khoo by a couple of brief scenes with her returning to the room over the years, lamenting what could have been. She’s not a ghost like Dennis, but she seems considerably drained of life until, far in the future, technology seems to have developed to the point where she can be with her love again, at least physically.

Finally, there is the ‘will they/won’t they’ story of two young Korean friends, vacationing as a means of escape regarding one’s recent break-up. This segment, in particular, is emblematic of both the strengths and weaknesses of the film as a whole. It offers endearing chemistry between its young male and female leads, and a few sweet moments of intimacy, but the goodwill is disturbed by some troublesome gender politics, ones which, based on the endpoint of the segment, aren’t necessarily being dissected for criticism. In this particular vignette, it’s the whole ‘nice guy’ trope that irks, where the virgin male best friend has been ‘waiting’ for his more promiscuous female companion to drop the fleeting love affairs and realise she should be with him. As might be predicted, he becomes vocally critical of her approach to sex, which is then explained as a pursuit for a never before achieved orgasm. Hey, maybe he can help. Or maybe Dennis the ghost can to make it seem like it’s her companion doing it. By the story’s end, it’s kind of a shock that the Korean boy never dons a fedora at any point and interrupts one of her speeches with an “Actually.”

Provocative and stirring in bursts, In the Room is less inconsistent than most anthology features, but its blend of the sweet and sexually explicit (saccharine score mixed with orgasmic screams) doesn’t always work. Commendable throughout, however, are the methods used regarding production design and cinematography to indicate the period changes and subsequent shift in moods. It’s not exactly The Grand Budapest Hotel in terms of decade distinction, but it’s an appreciated effort to make Khoo’s grand writhing flesh hotel more vivid.

In the Room screened at the London Film Festival.