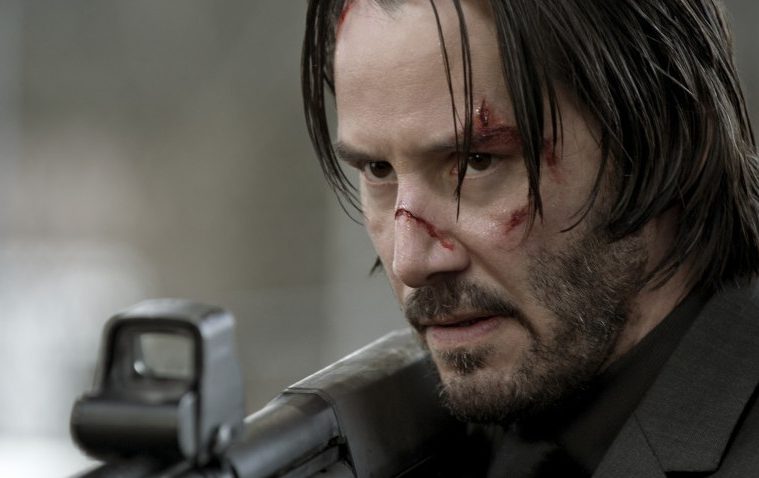 Hitting theaters in wide release this weekend is John Wick, a film I fell for at Fantastic Fest and I’ve since revisited. The actioner, from first-time filmmakers Chad Stahelski and David Leitch, follows Keanu Reeves’ title character who left behind a life as a hitman for Russian mobsters to settle down for a quiet life with his wife. We see him grieving after her short demise and when he has an unfortunate run-in with his old boss’s son, he only has vengeance in his heart.

This simple set-up is all that is needed to propel the film forward, and yet it is set in a lived-in world of assassins and hitmen that builds mythology and a code around them. But more than anything it’s a vehicle for Keanu and he shines here. The action is wicked and clearly in focus at all times, showing Reeves’ willingness to jump into the action genre that made him a household name in the first-place. John Wick just oozes cool in an effortless way and the way it embraces the silliness and humor just rounds it out.

During Fantastic Fest I sat down with Reeves to talk about the film and he touched on why the DGA didn’t rule in Stahelski and Leitch’s favor for being co-directors, what kind of advice and help he gave them coming off his own directorial debut, his puppy co-star’s range, what it will take to get him into the Fantastic Fest ring for a fight, and more. I had some fun questions throughout and think it shows that Reeves has a good sense of humor and is game. We will have one more interview with his co-star, Adrianne Palicki, in the coming days and you can check out my previous interview with Stahelski and Leitch here. Enjoy the full conversation below and don’t forget to check out the film when it releases this weekend.

The Film Stage: This is your first film since directing Man of Tai Chi, right?

Coming from that side of things, do you see production a little bit differently now?

Absolutely. Yeah. With Chad and Dave, they had a lot of experience shooting second unit with their action design company. I had worked with them over the years. So coming from directing Man of Tai Chi, then to partnering with them on their first film, I was trying to help in a [producer-like fashion].

Yeah, I bet. I’m curious; did you give them any advice coming from your own directorial debut?

Give me a nugget.

Make sure that while you’re in editorial that you project big once in a while. Don’t forget to look at the movie big.

Instead of on a monitor.

You use a number of guns in this film. Some of them are pretty unique, like that shotgun. What was your favorite to handle on set?

Yeah, for me it was just the pistol.

The film follows your character and every time someone mentions your name, there’s a sense of respect, awe, or horror. “Oh, crap, I gotta deal with this guy.”

Was there any name growing up that struck terror in you?

Uh, like the mythical boogie man? Hrmmm. I don’t know. No. [Laughs] That’s all right. You don’t have to have an answer. This is your second time at Fantastic Fest. I don’t think you got in the ring last year, did you?

I was in the debate.

You were in the debate but you weren’t in the ring, right?

No, he fought Tiger Chen.

So what’s it going to take to get you in the ring?

An invitation by Tim League!

[Laughs] I’ll have to let him know. The film has a very emotional core at the beginning of it. I thought it was clever because it showed off your range almost immediately. Did you shoot in sequence? Where did that scene with the puppy come into play in the shoot?

I know that famously animals are always kind of a nightmare to deal with on set. What was the dog’s name and how was she or he?

It was Andy the dog.

And he’s got great range because he’s playing a girl.

We got along pretty well. Which was nice. The dog was getting older and older. Which was great in a sense because puppies have puppy mind. But fortunately, the dog and I, I tried to spend some time with the dog before filming and hang out. So we had a rapport. It was still difficult. Sometimes, “Are you a cat or a dog!? Come back here.”

[Laughs] They’re not responding to your calls or anything.

“No, this smells really good.”

You drive three main cars in this film. Whether it’s the 69 Mustang, or the SS. Was it a Chevelle or a Camaro?

I think it was a Chevelle.

Those cars have so much power and…

Yeah, history. Which one of those two would you rather drive? There is a redemptive aspect to this film with Chad and Dave. And Dave is the producer, correct?

They both directed the film.

Okay. Because it is kind of confusing on some of the production materials right now that are out.

Yeah, they had a situation where they were directing the movie as directors and when they finished the film the director’s guild wouldn’t recognize them as the directors because of a precedent that they have. It’s grandfathered. Chad and Dave were under the impression that they could satisfy the [requirements] to be recognized. But then when it came back to the end the DGA decided that basically, next time, you can be called directors. But this time we have to split you.

Did they already lean towards Chad to begin with or was that a decision from the both of them?

No, that was all from the DGA. They had to declare one as the director and one as the producer. But then they were told that they can go try and be directors so they were monitored as directors and they were passing all of those recognitions as co-directors. Being responsible for the shared vision. But since the, I don’t know the years, but it was like the 30’s, the idea that there could only be one director, one voice, one movie. So they’re going through the process.

So, I have to wrap with you so I’ll do a fun slew of multi-choice questions.

Uhhhh, depends on the day.

All right. I like that answer. Liquor or beer?

Ohhhhh. What is wine?

Is wine liquor? I mean, I know it’s not beer.

Well, wine can be a third option.

Movie or a play?

That’s like choosing heavens. “You want this heaven or that heaven?”

[Laughs] All right! Well, thanks for sitting down with me and I wish the film the best.