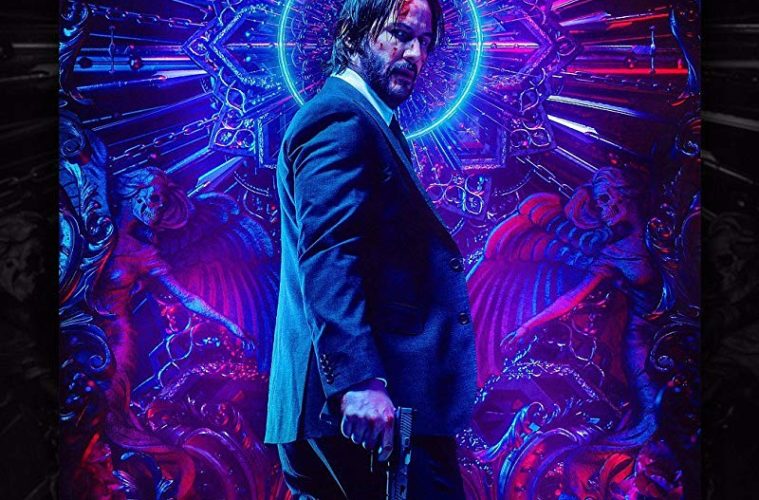 Beginning with what would be the climax of a standard action film, John Wick: Chapter 3 – Parabellum runs like a well-oiled machine, delivering exactly what you want in ways you didn’t know you wanted. Picking up mere moments after chapter two’s finale, there’s only a few minutes on the clock before John Wick (Keanu Reeves) becomes “excommunicado” with a $14 million price tag on his head, and all of the world’s assassins on his tail. Blood is on his hands after a verboten killing on the Continental Hotel grounds so he’s on the run, and his options are running short.

What follows in this first act is a balletic, radiant, and relentless feat of action filmmaking, captured with the kind of clear-eyed, pleasure-filled elegance reminiscent of Jacques Demy–just imagine a bit more gunplay, knife throwing, dog chomping, horse kicking, and samurai swordplay on motorcycles. It’s a total blast, leaving a high bar for the rest of the film to live up to.

Director Chad Stahelski is back in the sole director’s character after a heavy expansion of world-building in Chapter 2, but with his foundation set, he’s out to do something different. A franchise first of adding a subtitle with Parabellum (aka “prepare for war”) may have one thinking this trilogy-capper will dive even further into the mythology, but writers Derek Kolstad, Shay Hatten, Chris Collins, and Marc Abrams are far more interested in seeing what happens when the now clearly-defined rules get broken. The world has been built, and now it’s time to tear it down. Wick is desperate to get help any way he can and those from the High Table are determined to follow the path of his sins and force everyone involved to pay a gruesome penny. This cat-and-mouse set-up means it is a more simplified story this time around, as if the sheer amount of bone-crunching didn’t leave room for further exploration of this world. (Leave that to the forthcoming TV show spin-off.)

As he was in the last chapter, early on in Parabellum, Buster Keaton is seen on screen, nodding once again to the level of pure physicality and eye for movement Stahelski and company excel in conveying here. From death by literature in the New York Public Library to a knife-throwing fight for the ages to Wick utilizing a horse’s reflexes to lay waste, the first act offers a streak of unbridled inventiveness with a masterclass in how a lack of score can bring more weight to the action. It also means the rest of the film can’t quite match that level of bottled-up euphoria from the opening.

As we move continents, Halle Berry’s Sofia and her trusty assassin dogs prove their bite alongside John Wick, but after The Raid’s Yayan Ruhian and Cecep Arif Rahman show up, the exhaustion that our hero feels starts to spill onto the audience. It’s not a deal-breaker, but there’s a tinge of disappointment to see the giddy cleverness of the first act morph into a more familiar groove, especially after what seems like the millionth headshot.

The unrelenting combat thankfully leaves room for some knowing, welcome humor. As if one of his Comedy Bang! Bang! personas walked on the set, Jason Mantzoukas’s Tick Tock Man, does virtually nothing other than what his character title suggests. And flashes of this absurdist wit abound all over from a bad guy screaming, “shh!” during a library fight to obscene amounts of flash grenades rolled out during a fight to respites that are the closest thing to a video game loading screen to a fight where the main baddie reflects on how good their fight is, admiring him like a fanboy. These little touches help break up the threat of stakes-free monotony, which the film teeters further on the precipice of as it proceeds.

Returning cinematographer Dan Laustsen paints the eternal assassin in a melange of neon, so much so that a climactic showdown has our characters “setting the mood,” which simply means flipping on the equivalent of green-tinted Christmas lights, backed by Antonio Vivaldi’s “Four Seasons (Winter).” The combination makes for an exceptionally slick extravaganza, and that is precisely what Parabellum is most interested in delivering.

The harmonious combat may lose its poetry by the finale, but like last year’s Fallout, the self-reflexive narrative of our hero’s deteriorating body comes into play, and Reeves sells each moment with a mix of fatigued weariness and spirited gusto. It’s his commitment to the physicality required that signifies a mythic status to both the henchman who have the honor of fighting him and those watching the spectacle on display.