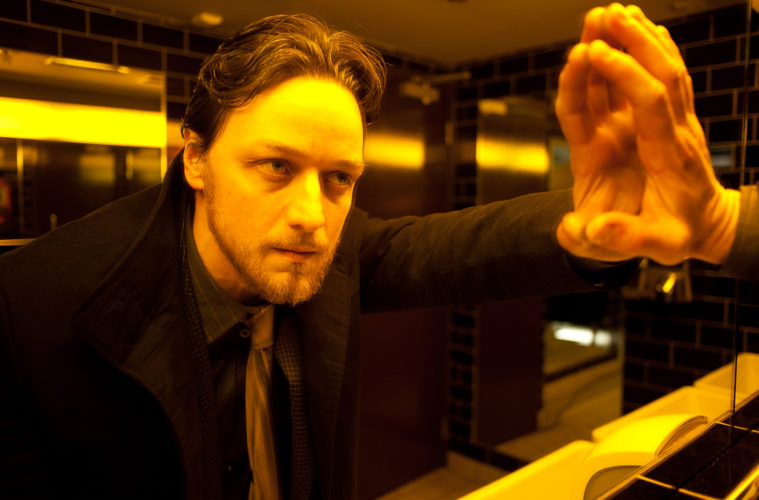 James McAvoy Gets Incredibly Dirty In NSFW Trailer For ‘Filth’ Although he hasn’t been seen on screen in the last couple of years, James McAvoy has been staying busy with production on a variety of projects. Last month saw the release of his slick U.K. thriller Welcome to the Punch, while this month kicked off with Danny Boyle‘s Trance. He’ll also pop up in the ambitious two-part drama The Disappearance of Eleanor Rigby later this year and now we’ve got our first look at another film, the dark comedy Filth.

Revealed in a red band trailer today, this adaptation of Irvine Welsh‘s novel lives up to his title as we find McAvoy playing a dirty, bipolar, bigoted, drug-addicted cop. Full of nudity and swearing, this one comes from director Jon S. Baird, who helmed Cass and was a producer on Green Street Hooligans. Check out the cocaine-filled poster below, along with the trailer, for the film also starring Jamie Bell, Imogen Poots, Jim Broadbent, Eddie Marsan, Joanne Froggatt, Emun Elliott, Martin Compston and Kate Dickie. Scheming Bruce Robertson (James McAvoy), a bigoted and corrupt policeman, is in line for a promotion and will stop at nothing to get what he wants. Enlisted to solve a brutal murder and threatened by the aspirations of his colleagues, including Ray Lennox (Jamie Bell), Bruce sets about ensuring their ruin, right under the nose of unwitting Chief Inspector Toal. As he turns his colleagues against one another by stealing their wives and exposing their secrets, Bruce starts to lose himself in a web of deceit that he can no longer control. His past is slowly catching up with him, and a missing wife, a crippling drug habit and suspicious colleagues start to take their toll on his sanity. The question is: can he keep his grip on reality long enough to disentangle himself from the filth?

Filth is set to open later this year in the UK, with no U.S. release date.