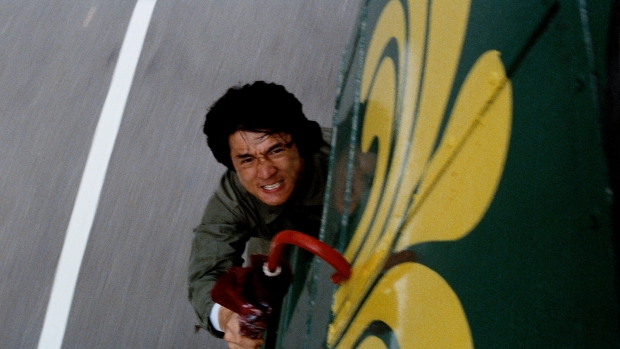 In a career spanning over 150 films over more than half-a-century (not to mention numerous broken bones), Jackie Chan has kicked, punched, and sprinted his way out of every action setpiece imaginable. One of his greatest feats is the Police Story franchise, particularly the first two entries which have now been restored courtesy of Janus Films and will arrive in theaters starting next month.

Ahead of the release, they’ve released a joint trailer which showcases the beautiful restorations in which one can see every karate chop, death-defying leap, and explosion with more clarity than ever before. I had the pleasure of witnessing the first film on the big screen at Metrograph last year and it was one of the most joyous crowd experiences I had in 2018, so be sure to seek it out if they are playing near you. Since it’s coming from Janus, it also means a release on Criterion is likely by year’s end.

POLICE STORY 2
Jackie Chan followed up the massive success of Police Story with an even bigger box-office hit. Having been demoted to a lowly traffic cop for his, ahem, unorthodox policing methods, Chan’s go-it-alone officer Ka-Kui quits the force in protest. But it isn’t long before he’s back in action, racing the clock to stop a band of serial bombers and win back his much-put-upon girlfriend May (the phenomenal Maggie Cheung, reprising her star-making role). Boasting epic explosions, an awesomely 1980s electro soundtrack, and a showstopping finale—which turns an abandoned warehouse into a life-size pinball machine of cascading oil drums, collapsing scaffolds, and shooting fireworks—Police Story 2 confirmed Chan’s status as a performer of unparalleled grace and daring. Police Story and Police Story 2 open February 1 at Alamo Drafthouse Downtown Brooklyn and on March 8 at NuArt in LA, with an expansion to follow. See more locations at Polygon.