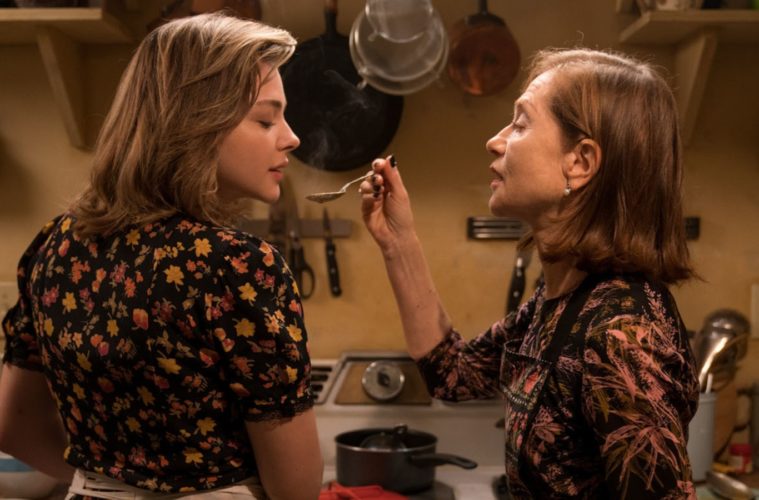 Isabelle Huppert on Playing a Psychopath for the First Time, Flipping Tables, and Her Favorite Films of 2018

You’ve seen Isabelle Huppert play a character who sliced her genitals in Michael Haneke’s The Piano Teacher, but as the actress explains it, in that film and others she wasn’t playing psychopaths, but women pushed to the of desire and their limits. In Neil Jordan’s new film Greta, Huppert plays a mysterious Parisian expat in New York City. Chloë Grace Moretz plays Frances, who moved to the city after the loss of her mother. When Frances finds a lost bag on the subway, she falls under Greta’s spell in this fairytale-esque thriller.

Huppert spoke to The Film Stage about Greta’s hidden motives, her favorite movies of 2018, the #MeToo movement, and Frankie, her upcoming film by Ira Sachs.

The Film Stage: The Oscars were last night. What was your favorite movie last year?

Isabelle Huppert: I had many favorite movies last year. I loved Roma. I loved The Favourite. I also love movies that were not in competition. I loved Wildlife. I loved Paul Dano’s movie. I thought it was great.

Greta is one of the first times you’re playing an actual psychopath, as opposed to the disturbed characters you often play.

Exactly. I’m happy to hear you say that. I keep hearing, “She’s like the monsters you’ve played before.” But she’s very different, this time she is a monster. I’ve never played monsters before.

It’s interesting because she’s poised. She dances when she kills. She’s such an interesting combination of being in control but doing these really horrible things. Who is Greta?

That’s the way she has to be, because it’s not about trying to explain things or trying to understand her. It’s supposed to be taken like a fairytale and in a fairytale it’s the bad and the good and you just have fact. And you just push people to think about what it means to be good and be bad and how evil grows in someone’s soul and that’s it. It’s quite enough, actually. It gives a lot of work to people’s imagination, I think.

The movie gives this sense that Greta’s like this because her daughter is missing. Do you think that’s the whole story or is there more to it?

Well, it’s possible because you can also imagine that it’s completely invented. At some point you can imagine the daughter has probably existed. But it’s just to create a possible background around her. She’s also shown like a very lonely person and this loneliness is very important. Because being so lonely, she creates all the fiction in her life, which unfortunately isn’t fiction because she does what she does. I think it’s interesting when you see the bags in the cupboard because she’s done this so many times before, it’s horrible. All of that is given to add to the mystery because you can’t take it as the main reason she does what she does. The movie does not tell you that she had this major conflict with her daughter that finally brought her to become that monster. It’s one element among others. You don’t know exactly; she keeps her mystery to herself right until the end. What is for sure is there is this morbid attraction and bond she kept with childhood. I was really struck, and it’s not always the case when I make movies, when I saw the apartment in the movie where we were going to shoot. I thought the design was really inspiring, it looked a bit timeless, you don’t know exactly in what time she lives. But when you discover the room where she keeps her victims I thought that was really telling. It’s all these little teddy bears and dolls everywhere, like a frozen image from the past. Like the time has been frozen since the 19th century and it’s really terrifying, I think.

The room is where she keeps her victims, but it also seems like a place inside of her psyche.

Absolutely. It’s a metaphorical place, where she keeps her victims but it’s a metaphor of where she’s locked in herself. She remains in that mental imaginary space from the past, from her childhood. All of a sudden it makes it seem very universal in a way. You always deal with who you were, in your past. That’s what life is about, you know? The whole journey of your life is about dealing with that dimension of your life. I think it makes the film really telling and universal. It’s not trying to excuse her or make you understand–no, it’s trying to reflect what it means to be a human being.

Will you talk about working with Chloë Grace Moretz?

That was really lovely, only with someone like her who you could really create something with, you can achieve these journeys and it was really possible with Chloë. First of all, she has a very healthy distance to what she does, which every actor should have distance from the material and she’s smart enough to keep the distance. She’s very collaborative and very funny. We had a lot of fun. We laughed a lot which is nice.

In the restaurant scene, when you flip the table, it’s frightening. But when you performing these kind of scenes do you feel the kind of tension that the audience feels, or is it different because you’re creating that moment?

To be honest, it’s very often the cause when you make movies, whether it’s this moment or the scene when I dance, you never anticipate people’s reactions. Let’s take the scene at the restaurant. I had no idea it was going to strike people the way it does. When I did it I just flipped the table and that was it because it’s in the script. I never expected that scene to become almost iconic. For me, it was scene thing among others. But I just needed a little bit of strength to lift the table to make it go where it went. I interviewed Neil Jordan and he gave me this great quote and I want to read it to you and get your response: ”Motherhood is a great maelstrom of psychosexual problems and issues, and I thought that was at the heart of Greta in some way.”

It could be, for sure. It’s interesting because I’m on stage right now and I just started previews of this play called The Mother at the Atlantic Theatre in New York. It’s funny because the more I’m doing interviews, the more I find more ties between the two projects. They both deal with this almost poisoned feeling of what motherhood in the worst places can lead you to. In The Mother, it leads her to insanity, where she kills herself. In the case of Greta, it’s another kind of insanity which is killing other people. It’s why it’s so universal. You have this in Madea, you have this in Hamlet, in so many great writings and paintings you have this subject. Fair enough, it’s where we come from and it’s our main bond. Hopefully you meet a man or a woman and create some new bonds, but it’s the first one you have to deal with all your life.

Just before the #MeToo movement started, you were in Elle, which you described as a post-feminist movie. With the thrust of ideas from second and third wave feminism roaring back into public consciousness, what are your thoughts on the movement?

I think it’s a major thing that happened. I still don’t know if it’s going to really modify, deeply, the relationships between men and women, as sometimes I wish it should. It already did change most extreme aspects of all of this, which is sexual harassment. Now when it comes to really modify the basic relationships between men and women, I wish it could, but I have to say sometimes I still feel occasions to admit that it doesn’t. Sometimes in the way men behave, I don’t think the lesson is learned. I think it’s going to take a long time, but, maybe it’s on a good path, I hope.

What was it like working with Ira Sachs on Frankie?

I loved it. He is such a wonderful director. Ever since I saw Love is Strange, I think he is just a really interesting director. I was really happy we had this collaboration together in Portugal. Ira Sachs is really searching for a truth about people, and maybe it’s something I didn’t do so many times before. Even if you are as true as possible in a scene, it’s always a character, whether it’s murder like I did in Greta, but here, given the story, and given the way Ira Sachs shows characters in his movies, he’s really about finding the evident truth of people.