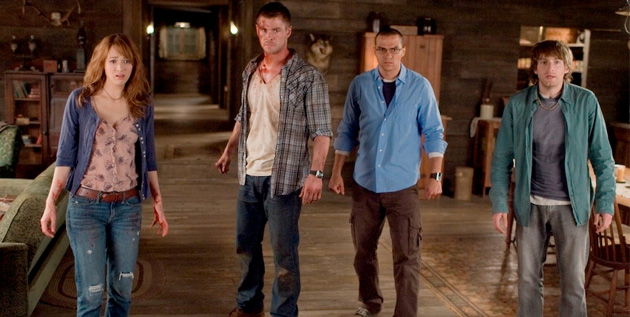 The horror genre these days tends to be oversaturated with low-budget, high-profit films that are poor carbon copies of features that have preceded them. This is not the case with The Cabin in the Woods. First-time director Drew Goddard and famed writer/director/producer Joss Whedon decided to officially premiere The Cabin in the Woods at the South By Southwest festival as the opening night selection. During the fest, both Whedon and Goddard were kind enough to spend some time with us at a roundtable to discuss what makes The Cabin in the Woods different than other films in the genre and how they approached making the film.

The Film Stage: This is a very difficult film to sum up without giving away details.  How do you describe the film without doing that?

Drew Goddard: We just talk about the fact that we love horror movies and we just set out to make a fun horror movie.  First and foremost, that’s what The Cabin in the Woods is. That was our goal. We love that experience of going to the theater on a Friday night, taking your date, screaming, laughing and having fun. That was the starting point. From there, things got a little more complicated.

Previously in the press, you’ve spoken about your dislike for films like the Saw franchise. Is this in any way a response to those types of films?

DG: I’m not sure I’ve seen the Saw franchise.

JW: Those terrible Saw movies that I’ve seen a billboard for. You know, I do think there’s a bit of a trend in remakes, because I have seen some of those, of the 70’s horror movies where inventive killing became the thrill and actual horror fell by the wayside.

DG: Right, the fetishisation of the violence became more important than the terror involved. You don’t shy away from extreme graphic images in this film.

JW: This movie is violent, and scary and bloody…very bloody. It’s also, ‘you think you’re seeing more than you are’. We’re not about the kill. We’re about the dread before.

DG: Yeah, I think what I saw happening in horror is that it wasn’t about anything other than the violence. Certainly violence is a part of the horror film, it always is, always will be and we love that. There needs to be a reason for this, for telling this story.  I stopped seeing reasons.

JW: I stopped seeing characters that I really was invested in, which I think horror is much more effective when you actually wish the person would live. As opposed to, ‘I can’t wait to see how they kill that guy’. That’s not fun.

Why do you think the horror genre has gravitated towards the ‘fetishisation of violence’?

JW: I feel like there’s a natural de-evolution in every genre that at some point takes place. Action movies get so pumped up, romantic comedies fall into a compendium clichés of romance and at some point we lose sight of the urges that made us want to make these things or see these things. People just go, ‘well this worked, so put in more of this.’ It sort of gets distilled more and more and you need somebody to go, ‘you know what, I remember the old thing. I remember the urge that causes this kind of thing,’ the love of romance, the love of action, the love of horror, the love of whatever it is.

We didn’t write this for a studio on assignment, we wrote this because this is how we amuse each other. We weren’t beholden to any series of things or requirements, ‘well, you must have the following kill and the following thing because it worked over here.’ We loved horror movies and we wanted to make ours. I think eventually somebody always comes around and gives you a slightly different view of the thing you’ve suddenly gotten used to seeing one way. Suddenly there’s a romantic comedy without the exact same ending, and the same wacky friend, and the same structure and you go, ‘oh that’s right, romantic feelings.’ Why did you decide to make a horror film that’s both funny and scary rather than a classically scary horror film?

DG: I think, as Joss said, because we didn’t develop this anywhere. This very much had a sense of, ‘let’s do what we want, let’s write the movie we want to see.’ We just love to switch it up. It’s fun to get to be multiple genres. It’s fun to say, it doesn’t have to be any one thing. We get to straddle many fences. I don’t’ like it when in movies filmmakers think that the audience can only handle one thing. I feel like we can do that. It’s exciting; it brings an energy to the movie.

JW: When I first started seeing Hong Kong movies in the 80’s, I was just blown away by the fact that they relentlessly refused to decide on a genre.  They would seamlessly change it up. It gives you that thrill that actually good horror gives you. ‘I don’t have a footing here, I’m not sure what’s going to be next. Is it going to be funny or is something horrible going to happen?’  Besides which, we can make a lot of jokes.

Was 3D or post-production 3D ever brought up or did you guys not want that?

DG: No, we didn’t want it. I didn’t shoot the movie for 3D, I didn’t plan it for 3D. There’s this period in Hollywood where everyone wanted 3D. I don’t think anyone in Hollywood understood what 3D was, they just saw that Avatar made a lot of money and so they clearly correctly assumed that it was because it was in 3D. (laughs) So everyone had to go through this process. It happened on a lot of films where they said, ‘well can you make this 3D, let’s just make this 3D.’ Luckily, we were able to weather that storm and cooler heads prevailed.

JW: We decided to bankrupt MGM so that we just lay low for awhile. (everyone laughs)

DG: Sorry for delaying The Hobbit. (everyone laughs)

What were your thoughts on using CG versus practical effects for the film?

DG: The rule with Cabin was that, if we can do it practically, we’re going to. It challenged the crew, because I think that CG has become a bit of a crutch that people lean on. Now that I’ve directed, I understand why, because it’s so much easier.  Because I was so naive, I like the tactical feeling. No matter how good the CG is, you can’t beat something that’s actually there. I think that it really helped that I was this naive, because I could just keep saying, ‘no, we’re doing it this way’. The crew, God bless them, they came around and it became very much, almost like a magic trick. We’re actually building things and there’s a lot of sleight of hand that happens in Cabin.

Was the film shot on location at an actual cabin or on set?

DW: No, we built it ourselves.

DW: (laughs) We had people build it  We shot it in Vancouver, which has some of the most gorgeous woods in the world so we found those woods and worked backwards from there.

There’s a definite fingerprint of each of you in the film.  Can you talk more about the pre-production and how you kept control throughout the process?

JW: The only discussion we had when we were writing the movie besides, ‘what are we supposed to write now?’ was, ‘can we make this? Will anybody give us money for this, if so how much?  Can we afford to do all this?  Can we get Drew the directing slot?’  We were dealing with practical realities as a side bar.  We didn’t actually have to deal with any of the practical realities because the moment we wrote it, MGM came to us and said, ‘we will buy this under your conditions, which are: We film exactly what you wrote, that Drew directs it and…’

DG: And that you produce it.

JW: It’s actually had a cleaner line from start to finish, despite the three-year gap, than anything I’ve ever worked on. We were able to say, both of us were working it wasn’t like we were desperate. ‘Please studio, we’ll do what you need. We can add a loveable giraffe, whatever’. (sigh) A loveable giraffe.

JW: We were able to say, ‘look, this is it, take it or leave it.’ There was no hesitation on MGM’s part on taking it and again with Lionsgate. As soon as they saw it, they said, ‘don’t change any of this. We don’t need 3D. You didn’t make it for that. This is the thing, let us market it for you.’ We said, ‘OK.’ The Cabin in the Woods opens nationwide this Friday, April 13th.