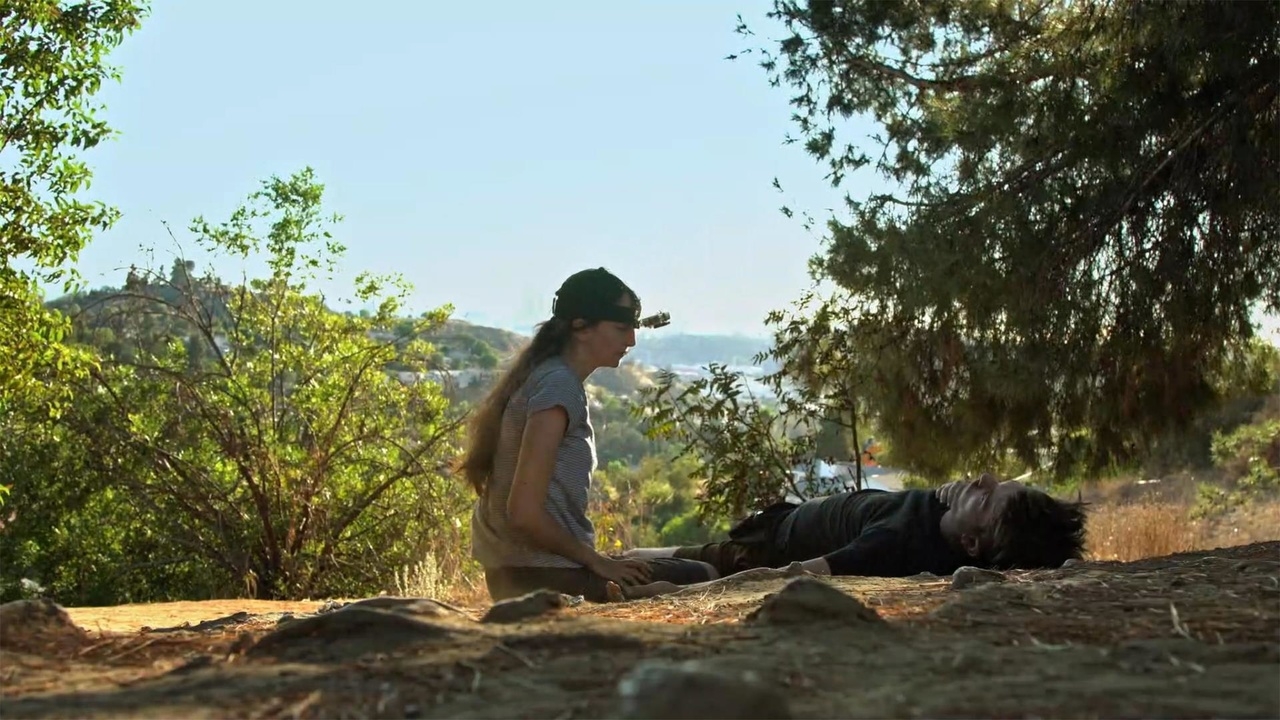 Are the qualities of a successful filmmaker the same as those that make a prolific serial killer? Both certainly demand meticulous planning and precision. In I Blame Society, star-writer-director Gillian Wallace Horvat posits that maybe both roles also require a degree of sociopathy. This hilarious mockumentary features Wallace Horvat (playing a homicidal version of herself) setting out to test a friend’s “compliment” — that she would make a good murderer — by shooting a doc on how to commit the perfect murder.

Wallace Horvat’s first target in I Blame Society is the sexist LA film industry and its clueless gatekeepers. Her Gillian is a filmmaker who has been struggling to get work and financing for years despite plenty of experience and qualifications. Her downward spiral is triggered by two instances of rejection that act as the straws to break the camel’s back. First, her manager casually dismisses a feature script she wrote about Israel as “too political,” and calls the female lead unlikeable. Next, two young, male producers call her in for a meeting, which she thinks will be about her script, but which turns out to be an offer of admin work that might lead to a random for-hire job. Lucas Kavner and Morgan Krantz get some of the biggest laughs of the film as the producers, who mispronounce “intersectionality” as “intersexuality” and try to avoid admitting they’re hiring Gillian as a token woman by awkwarding stating that they want “someone like you… with a voice.”

Gillian’s murder film starts as a delightfully unhinged, slightly pathetic attempt for her to reclaim control as an artist after the industry has shut her out. She’s not planning to actually kill people — just work out how she’d do it if she did, as a kind of personal art project. “In my research, I found out that killers build up to a murder as the culmination of a progression of thrills, so I’ve got to do a small transgression to start my adrenhaline addiction,” she recites to camera. She then steals a small bottle of over the counter medicine that she doesn’t actually need, leaves the store, and then goes back in the store to put it back because she feels bad. Gillian’s moviemaking is funny because it’s so silly, but she’s also mostly harmless, beyond being a bit obnoxious.

That all changes when petty crime turns to actual murder, and I Blame Society’s pointed satire turns its blades in Gillian’s direction. It’s refreshing to see a film about a murderous woman that doesn’t fall into false girl power mode by glorifying murder as an act of feminism. Gillian may think she’s sticking it to the patriarchal figures who exerted their power over her, but really she’s just mimicking their behaviour by exerting her own power over others. When Gillian’s boyfriend pleads that there’s no movie worth hurting someone for, she replies, in a measured tone, “I don’t agree, if it’s a really bad person and a really good movie.” Although Gillian later explains that she can’t just kill bad people because then it would establish a pattern of victims that could get her tracked down by the police — “I have to mix in classic victims, the disenfranchised, the transient.”

The lynchpin that holds I Blame Society together is Wallace Horvat, not just with her writing and direction, but with her deadpan performance. It’s a turn that may seem flat at first, but a closer look reveals that her monotone delivery is carefully calculated. Wallace Horvat conveys a total lack of empathy for others by rarely letting genuine feeling invade her delivery. When Gillian has to pretend to care about someone else, Wallace Horvat’s voice strains as she reaches for (but never quite grasps) a sympathetic tone. There’s also a subtle but key difference to Wallace Horvat’s performance in scenes where Gillian is performing for the camera versus when she’s just being herself. In the former, Wallace Horvat plays the character as an extremely bad actor trying to be natural for the camera.

Impressively, the film manages to mostly cohere as a mockumentary in terms of visual internal logic. Each shot makes sense, and is made funnier, when you think about how the character Gillian chose to set up her two cameras (a borrowed camera and an iPhone) in the space to get coverage; moreover, there’s rarely a moment when you’re left skeptically wondering, “How did the character get that shot?” Wallace Horvat milks the “documentary” premise for all the visual gags it’s worth: I laughed whenever I notice Gillian’s phone propped up against a wall in the background of a shot, conspicuously hidden to capture the reverse angle to the one we’re currently watching. Wallace Horvat clearly knows and loves the genre, and with I Blame Society, she makes it feel fresh again.