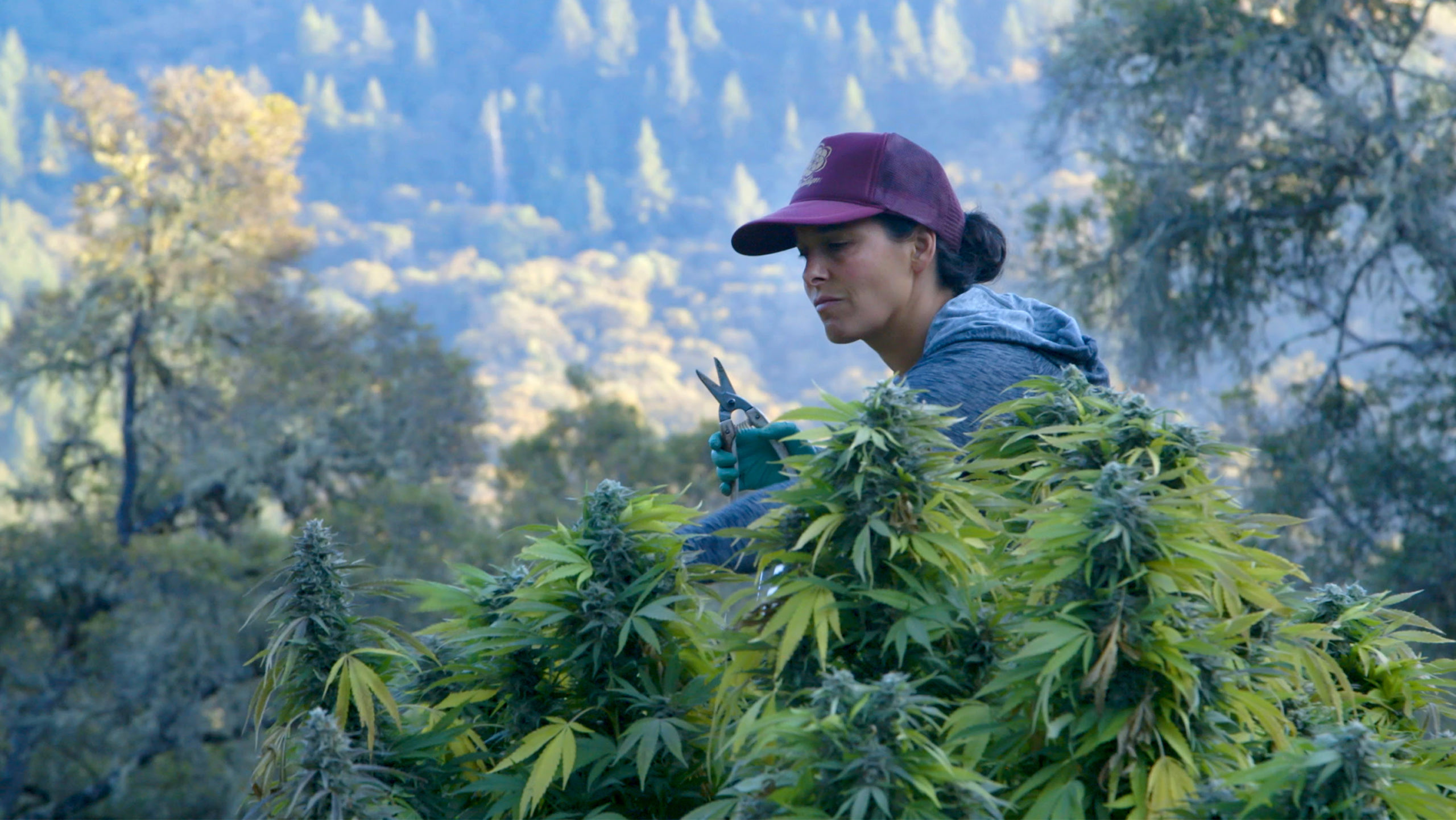 In what could be a companion piece to Mario Furloni and Kate McLean’s cannibusiness drama Freeland, Chris J. Russo’s Lady Buds is an exploration of newcomers and legends blazing a path for themselves in California’s legal recreational cannabis market. Legalized by the flawed Prop 64 in 2016––a messy bill that intended to provide both relief for those with a criminal record while also building a market place that gave small farmers time to develop a “farm to stoner” industry before big capital came in––the subjects of Russo’s documentary spend time navigating the legal framework, fighting against NIMBY-ism, old thinking (both within the industry and in municipalities) and the well-capitalized players looking to cash in. The old farmers of Humboldt County balance the hurdles of legalization along with practical business decisions: will publicly-traded companies and big money make it impossible to complete, driving the price of the product downward and flooding the market with a mediocre quality?

Framing the legalization narrative with the distinct stories of six women, Lady Buds provides a comprehensive guide to the issues through the dimensions of race, commerce, agriculture, and family. The film may be helpful to states and communities in areas where legalization has just passed, including New York and New Jersey. Pockets of conservative towns whose voters supported legalization are now confronted with what exactly implementing that mandate would look like and which parts of the chain (if any) to participate in. New York restauranteur Kathryn Wagner, who years ago gave it up and moved to a farm in Humboldt County, now spends her days navigating the framework, including the fact her industry is still not legal at a federal level, necessitating the need to do business entirely in cash.

Sue Taylor is a former Catholic school principal who starts her own dispensary from the ground up in Berkley, California with the goal of educating seniors about the benefits of carefully curated marijuana products. As a successful Black woman with access to capital in order to build a large, welcoming, and inclusive space, her aim is largely focused on serving seniors. Activist Felicia Carbajal, a fourth-generation Mexican-American social entrepreneur is interested in reclaiming and building equity for Black and brown Americans who were most likely to become victims of the silly war on drugs. Working first in the compassionate care (medical use) industry, her epiphany came when using CBD as an alternative to prescription drugs.

The film also follows mother, second-generation farmer, and rebel at heart Chiah Rodriques, who leads the cooperative Mendocino Generations, a collection of small-batch farmers in Mendocino County who band together as one to market and sell products as a collective force against the impending entrance of “big ag” in cannabis. Raising her family on a 10,000 square foot farm with her husband, she fights for the same level of recognition the wineries have, especially when the region is put under a state of emergency. What is most interesting about the story of Rodriques and husband Jamie is how they navigate raising a family on a farm, especially when their teen son starts experimenting and disrespecting the plant.

Last but not least are the OG stoners, The Bud Sisters (Pearl Moon and Dr. Joyce Gentofanti), college friends from Montana who head further west and develop pain relief saps amongst other products. They, along with Rodriques, navigate the transition from complete illegality to medical use and now recreational use, formalizing paperwork, and preparing to sell their product. Friends, including other original farmers, however remain skeptical and Wagner attempts to push them along as she hopes to open her own shop despite local opposition from a NIMBY council.

Lady Buds is a comprehensive and insightful look at legalization, illustrating the equality component that has been core to legalization along with the threat of big money and established players entering the space and pushing down pricing. Films like this are useful as towns (including mine in New Jersey) are navigating how to implement the will of the voters who are often ahead of their local elected officials. Well-constructed if not repetitive in certain passages, Lady Buds is an engaging and comprehensive look at the many dimensions of legalization, striking a friendly, conversational tone as it provides a deep dive into the supply chain, marketing, distribution and ultimately the bind the industry finds itself in as the drug is still considered at a federal level a controlled substance.