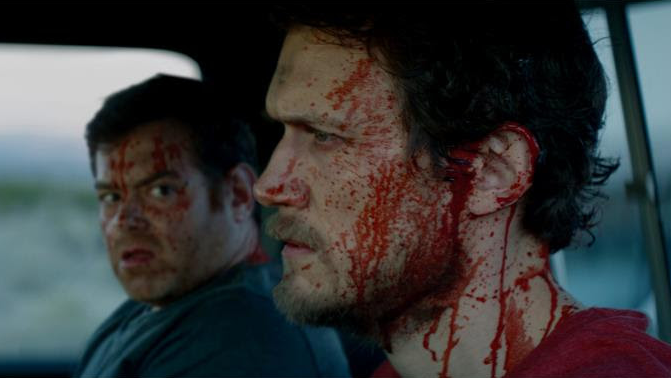 Horror anthologies are all the rage, with both up-and-coming and established filmmakers contributing to works like the extensive ABCs of Death films, and the found footage V/H/S trilogy. Now comes Southbound, a new collection featuring horror shorts directed by V/H/S alums Roxanne Benjamin, David Bruckner (The Signal), and Radio Silence, as well as Patrick Horvath (Entrance). A trailer and clip of the film’s seven-minute opener were just released, providing a peek at the terror to come.

First, the clip serves as a promising cold opener, dropping the viewer right in the middle of the action as two men in a classic pickup are pursued by dark, spectral beings – and then things start to get weird. While the footage recalls, to some degree, Twilight Zone: The Movie, details have painted Southbound as a twist on the disconnected style of previous anthology films. In an interview, Benjamin – who’s also producing  – revealed they wanted the film to feel more “cohesive and unified,” adding, “We wanted it to feel like one world, from different viewpoints, that shifted seamlessly between the different storylines like a traditional narrative.” It should prove interesting then to see how the trippy opener plays into the overarching story thread.

See the trailer and clip below, and our review here.

On a desolate stretch of desert highway, weary travelers—two men on the run from their past, a band on their way to the next gig, a man struggling to get home, a brother in search of his long-lost sister and a family on vacation—are forced to confront their worst fears and darkest secrets in these interwoven tales of terror and remorse on the open road.

Southbound is scheduled for for a limited theatrical run on February 5th and will hit VOD on February 9th.