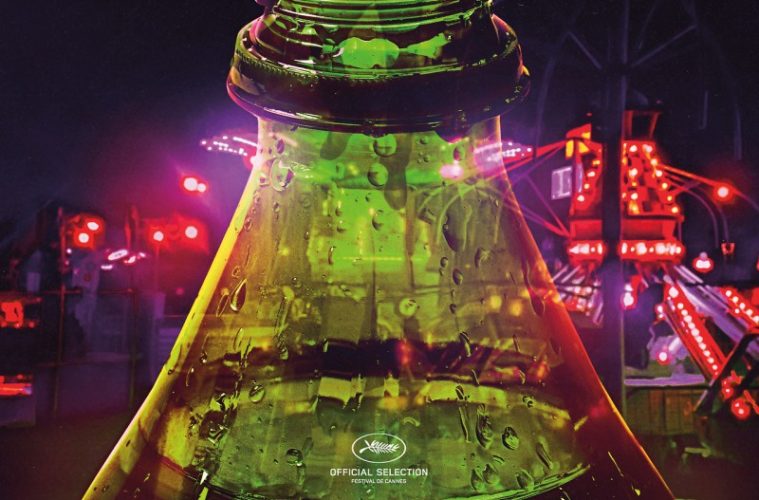 It’s probably safe to say that, up until now, no lucid person had compared a Safdie brothers film to the work of Michael Mann. Indeed, it may still be a stretch, though Good Time — the New York siblings’ latest eye-popping, pill-popping, attention-deficit character study — could feasibly be described as just that. It’s in parts a heist movie (iconic masks included) and a chase movie, but not an homage in any sense — more an evolution, like a 21st-century fast-food hybrid that mixes trash television and drug culture with Day-Glo-splattered night-time cinematography and throbbing synthesizers, thanks to a standout score from Oneohtrix Point Never.

We open on a very Mannian helicopter shot that leads to an unmistakably ’80s title card. Robert Pattinson gives the performance of his career thus far as Connie Nikas, a wired, erratically dangerous, and unpredictable pariah who looks like he could use a good night’s sleep. His brother Nick (quite boldly played by Ben Safdie, half of the directing duo) suffers from a mental disability, a Lenny to his George. We open on a scene where Connie rescues — in his eyes at least — Nick from a therapy session and takes him along to rob a bank.

It’s become something of a regular feature of Josh and Benny Safdie’s films for the central duo to attempt to flee New York City but not get very far (The Pleasures of Being Robbed, Heaven Knows What). As it turns out, the heist goes bust and, while Connie escapes, Nick gets booked and will soon be sent to Rikers Island. We learn that Connie had apparently hatched a plan to take Nick and the money to go live in some sort of secluded cabin outside of town (there’s no direct mention of alfalfa). Instead he’ll spend the movie attempting to free his brother, first from the police station and later the hospital after Nick gets involved in a fight. Many things don’t go as planned.

Good Time takes zero heed of conventional narrative tropes — the thought of even trying to pigeonhole it is really quite bizarre — so we don’t actually see much of Nick after the opening moments. Connie instead finds accomplices in a young black girl named Crystal (played brilliantly by Taliah Webster, an incredible find) and another convict (Buddy Duress), a man who he accidentally frees from the hospital instead of Nick when he finds him unconscious and covered in bandages. On the run from the cops, Connie’s only immediate way of paying Nick’s bail comes in the form of a Sprite bottle full of LSD, which is about as scummy an image of a large quantities of drugs as one can possibly imagine.

Often working with little-to-no lighting, Sean Price Williams confirms his status as one of the most adroit, visionary cinematographers around, and Oneohtrix Point Never provides what will no doubt be this year’s most blogged-about film score. It is a remarkably vivid and fresh piece of filmmaking, one that builds on the directors’ previous outings without being overly familiar.

What is familiar, perhaps, is the frankly unbelievable ability the Safdies have of evoking empathy for a desperately selfish lead character. Unlike Arielle Holmes’ heroine junky or Eleonore Hendricks’ hypochondriac, Connie’s misgivings cannot be blamed on any sort of addiction, yet you might still feel bad for the guy, even after seeing him pour a brain-damage-inducing amount of LSD down a security guard’s throat or taking 16-year-old Crystal to the bedroom to distract her from seeing his face on the news. It’s for this impossibly delicate mode of storytelling and performance that both the Safdies and Pattinson deserve significant praise.

Good Time premiered at the Cannes Film Festival and will open on August 11. See our coverage below.