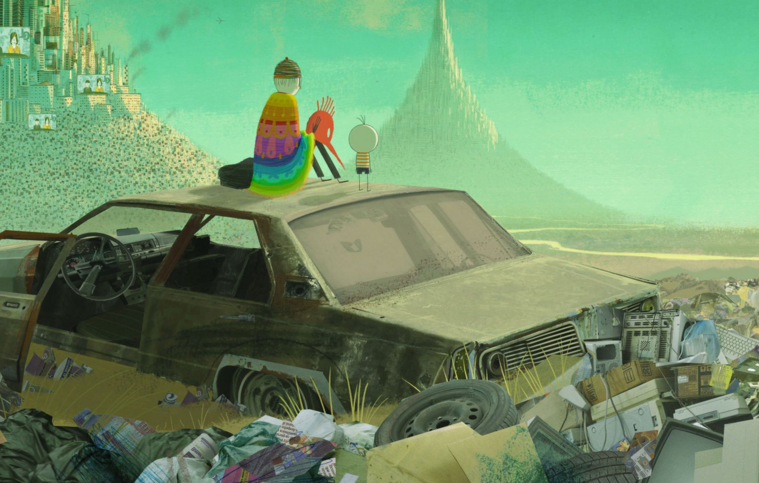 Get Swept Into a Beautiful, Oppressive World in Trailer For ‘Boy and The World’

2015 has seen its share of innovative stand-alone animated features ranging from the surrealist grotesqueries of Bill Plimpton’s Cheatin’ to the technicolor pop psychology representations of Inside Out, but there’s perhaps no larger regular supplier of idiosyncratic animation than the work released through distribution imprint GKIDS. In 2015 alone, they’ve been responsible for the releases of both highly anticipated animation fare like Studio Ghibli swan song When Marnie Was There, along with culturally varied projects like The Prophet and Zarafa.

The Boy and the World is the next release to get excited about for fans of eccentric animated features. Originally released in 2013 in creator Alê Abreu’s home country of Brazil as “O Menino E O Mundo,” The Boy and the World is a vividly abstract story of a young boy who chases after his father through a kaleidoscopic world of suffocating industrialism, painterly landscapes, and impressionistic dreamscapes. This week, we have our first US trailer, which is more a visual preview than any sense of a coherent narrative. Although it should be clarified that the movie is entirely wordless, instead favoring an explosively percussive soundtrack of Brazilian hip-hop and brassy New Orleans-style big band, and the endlessly expressive visual style.

Vaguely recalling Don Hertzfeldt in its use of crude characters and strobing, busy backgrounds, the visual style looks to meld shaggy pastel and chalk styles with superimposed collage, computer generated elements, and various other unorthodox formats. It’s unclear from the trailer how these elements will be categorized or understood thematically, but there is an aforementioned relationship between cosmopolitan and pastoral elements, especially seen in the clash between factory machines that look like they could swallow workers whole and the festive color of the partying city.

GKIDS elaborates on this feeling as such: “Entirely wordless, the narrative describes a clash between poor and rich, countryside and city, indigenous and imperial, handcrafted and mechanized – and throughout the tumult, the heart and soul of the people beats on as a song. “

Cuca lives a life of quiet wonder, exploring all that the countryside has to offer. But his cozy life is shattered when his father leaves for the city, prompting him to embark on a quest to reunite his family. The young boy’s journey unfolds like a tapestry, the animation taking on greater complexity and variety as his small world expands. Simple line drawings of the village give way to broad brushstrokes forming giant bushels of cotton lining country roads and sweeps of pastel churned into roaring waves. Approaching the city, industrial landscapes are inhabited by animal-machines, whirling carnival colors and exploding fireworks fill the sky above decoupage favelas, while flashing neon advertisements and garish shop windows illuminate the night.

Boy and the World will initially open in New York and Los Angeles on Dec. 11. More theaters will follow in January 2016.