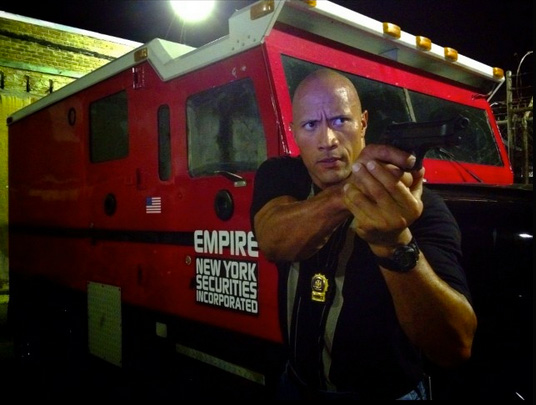 No matter how up or down his career is, director Dito Montiel always seems to be pushing forward on his next film. The Guide to Recognizing Your Saints helmer is bouncing back from last year’s mega-bomb Al Pacino and Channing Tatum drama The Son of No One, with a new heist film, Empire State.

Already deep into production, the Adam Mazer-scripted, true-life tale, follows “two childhood friends from Astoria, N.Y., who plan to rob an armored car depository, with Dwayne Johnson playing the NYPD detective out to bust them.” Some photos of stars Liam Hemsworth, Emma Roberts and Nikki Reed have been circling on various outlets and can be seen above, but now Johnson has shared what looks to be the first official still on Twitter. Check it out below, featuring Johnson deep into action mode, for the film also starring Michael Angarano, Jerry Ferrara and Chris Diamantopoulos. Update: Check out two more photos from Deadline below. Expect Empire State to arrive in 2013.