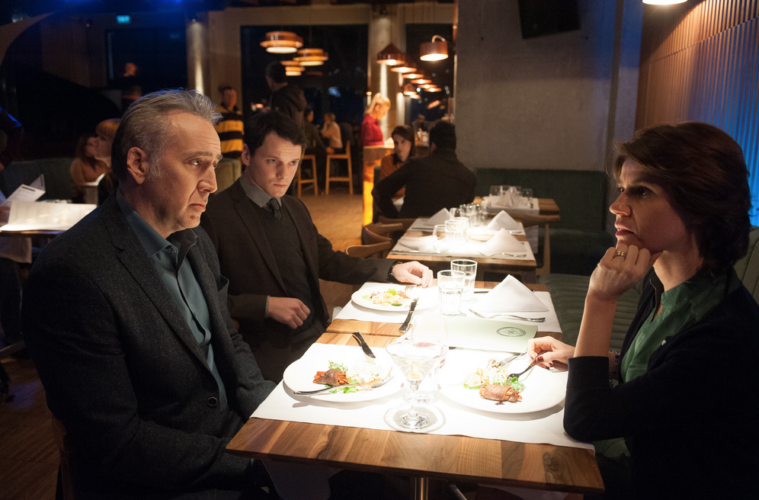 No stranger to kicking up controversy, whether it’s through his directorial, editing, or casting decisions, Paul Schrader has once again been entangled in a struggle when it comes to his follow-up to The Canyons. His latest film, the thriller Dying of the Light, once set to be directed by Nicolas Winding Refn, follows Nicolas Cage as a CIA agent going blind on a final mission. We got word earlier this fall that all is not well in the editing bay, with the director and the producers of the project fighting over the final cut.

Variety has now chimed in with more details, including the debut of the first still, which one can see above, also featuring co-stars Anton Yelchin and Irène Jacob. “It was a typical process in that he delivered a cut, we and the distributor saw the cut and believed there was a better movie there,” Gary Hirsch says, who produced the film. “We made suggestions, which Paul to a large extent didn’t approve of, and so he refused to make the changes that we all wanted, despite the fact that the changes we were looking for were very much in line with the script that he wrote and shot.”

Another producer, Todd Williams, downplayed the controversy, saying, “This is a movie that we shot in February and it’s coming out before the end of the year. There’s not really any drama.” While there’s still not release date set from Grindstone/Lionsgate, the creative forces behind the film tell a much different story. Schrader said he was frustrated and indeed walked away after delivering a requested second cut with editor Tim Silano (who was then fired, leading the director to abandon the project), a version that only added “a few of the suggested revisions,” according to the producers.

After taking things over with a new editor, the producers now say their new “more conventional” version is reportedly 80% the same as the first, with “tightened pacing, recutting of several action scenes, and the removal of a voiceover narration.” Refn, who stayed on as executive producer “to be helpful as much as I could to Paul Schrader,” calls their decision to take over the editing a sign of “artistic disrespect.” Refn also adds that Cage “is very frustrated because, in his mind, he and Paul made a great movie that both of them are very proud of — and for that to be taken away from them, it doesn’t make any sense.” With no release date in sight, this battle indicates Schrader’s version isn’t the one we’ll see in theaters, but hopefully one day the director’s original version will surface.

Update: The first poster has arrived (via Coming Soon) ahead of a December 5th release. What do you think about the legal battle over Dying?