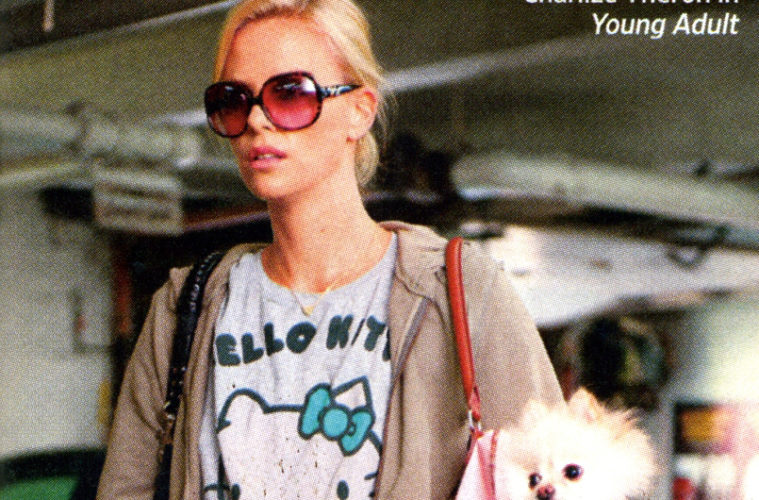 Since Jason Reitman will not be parading around the film festival circuit, we’ll unfortunately have to wait a little longer to see his next film Young Adult, but today we have our first glimpse. The Thank You For Smoking and Up In The Air director is re-teaming with his Oscar-winning Juno writer Diablo Cody for this drama starring Charlize Theron, Patton Oswalt, and Patrick Wilson. You can see the first image above (via EW‘s latest issue) for what is said to have a more “unlikable” tone than his last efforts.

Academy Award® winner Charlize Theron plays Mavis Gary, a writer of teen literature who returns to her small hometown to relive her glory days and attempt to reclaim her happily married high school sweetheart (Patrick Wilson). When returning home proves more difficult than she thought, Mavis forms an unusual bond with a former classmate (Patton Oswalt) who hasn’t quite gotten over high school, either.

You can see Young Adult when it opens in limited release on December 9th, and then goes wide on December 16th.

We also have our first image of Amber Heard in Bruce Robinson‘s long-awaited adaptation of Hunter S. Thompson‘s The Rum Diary. The drama stars Johnny Depp, who can also be seen below, as well as Aaron Eckhart, Michael Rispoli, Richard Jenkins, Giovanni Ribisi, and Marshall Bell. I’m hoping we get a trailer soon for this one. Based on the debut novel by Hunter S. Thompson, “The Rum Diary” tells the increasingly unhinged story of itinerant journalist Paul Kemp (Johnny Depp). Tiring of the noise and madness of New York and the crushing conventions of late Eisenhower-era America, Kemp travels to the pristine island of Puerto Rico to write for a local newspaper, The San Juan Star, run by downtrodden editor Lotterman (Richard Jenkins). Adopting the rum-soaked life of the island, Paul soon becomes obsessed with Chenault (Amber Heard), the wildly attractive Connecticut-born fiancée of Sanderson (Aaron Eckhart). Sanderson, a businessman involved in shady property development deals, is one of a growing number of American entrepreneurs who are determined to convert Puerto Rico into a capitalist paradise in service of the wealthy. When Kemp is recruited by Sanderson to write favorably about his latest unsavory scheme, the journalist is presented with a choice: to use his words for the corrupt businessmen’s financial benefit, or use them to take the bastards down.

What do you think of these first looks?