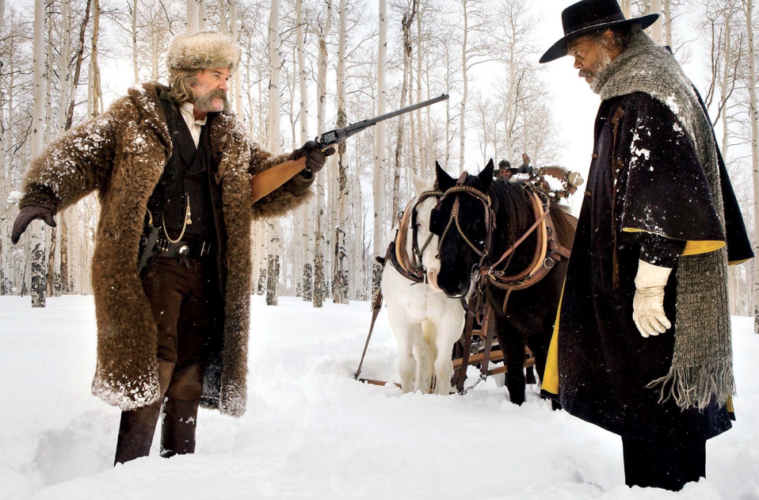 First Batch of Images From Quentin Tarantino’s ‘The Hateful Eight’ We’ve still got many months before we see Quentin Tarantino‘s highly anticipated western The Hateful Eight, but today brings the first official images. Said to be a small-scale, intimate western taking place mostly in one location, the director tells EW, “For me it has more of a Western Iceman Cometh kind of vibe about it.” Comparing it to his first film he says, it follows “a bunch of guys in a room who can’t trust each other. That wasn’t a marching order when I sat down to write the script, but pretty quickly I realized this is kind of a nice coming-full-circle.”

Speaking in the print version, Jennifer Jason Leigh describes the relationship between her outlaw character and Kurt Russell‘s bounty hunter as they “are essentially the most dysfunctional couple since Who’s Afraid of Virginia Woolf?” While one can see the first look at them above and below, Tarantino also opens up about his place in the industry. “Hollywood has changed a whole lot, and if I had to change with it, I wouldn’t even make it to 60. I signed up for one film industry and I’m not signing up for the other one. That’s not why I got into this.”

He adds, “I want there to be a connection to the young artist’s spirit that was there in Reservoir Dogs. I don’t want to be one of those old-man directors; I want there to be some form of aesthetic connection, a vitality, from my first film to whatever is my last film.” So, it thankfully sounds like we’ll get at least a few more films from the 52-year-old director in the coming years. As for his latest, with a cast of Samuel L. Jackson as Major Marquis Warren, Kurt Russell as John “The Hangman” Ruth, Jennifer Jason Leigh as Daisy Domergue, Walton Goggins as Chris Mannix, Demian Bichir as Bob, Tim Roth as Oswaldo Mobray, Michael Madsen as Joe Gage, Bruce Dern as General Sanford Smithers, and Channing Tatum in a small role, check out the images below, also including a piece of concept art.

Update: Meet the ensemble with even more new images from EW. The Hateful Eight will be released later this year in 70mm.