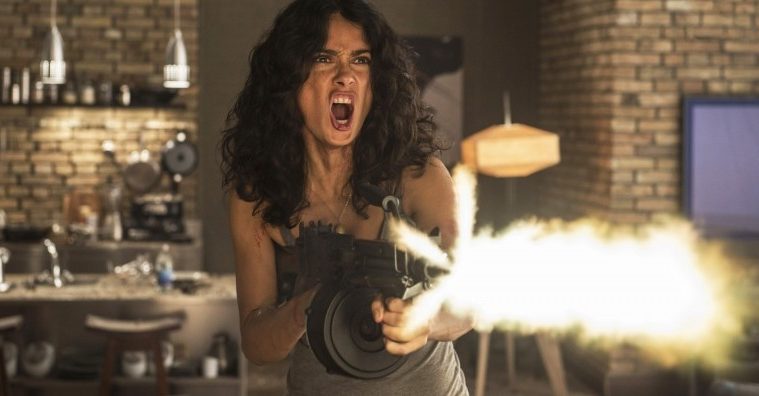 At the end of the day, a gimmick is a gimmick. Taking place in a single room, Joe Lynch’s latest film Everly can feel needlessly contained, but eventually manages to exceed beyond its basic concept. The issues are particularly in the first act, but when it starts to build some mythology and introduce characters that are more than bullet-fodder bad guys, it turns into a genuinely thrilling female-led action film. Salma Hayek is an easy highlight, proving that she still has plenty of the magnetic charisma that led to her stardom in the first place and this film showcases a fun wrinkle in her ability to pull off the bad-ass action star with charm.

We meet Everly (Hayek) when she is in a load of trouble with a slew of bad guys outside her bathroom, threatening to break it down. They’ve had their way with her and are looking to finish her off. But she’s got a reason to live, a detective contact she is going to confess to, and the drive to create a new life for herself. The large flat where she lives in is neighbored by other prostitutes that are all owned by her ex, a mob boss named Taiko (Hiroyuki Watanabe), as she has been for the last four years. Now that he’s aware of her intentions, he has put a bounty on her head and things quickly ramp up as bad guy after bad guy (and girl) shows up at her door to put her down. Lynch is smart enough to have fun with the waves of enemies that Everly faces. While they don’t get much screen time, he instead focuses on a manic hilarity in the way they are dispatched, whether it’s two foes killing each other while fighting over the potential bounty or in the way the bodies pile up and form a domino-like effect where the set-up and payoff are both quick and furious. Some of that energy that the filmmaker provides is through the way the scenery of Everly’s apartment is torn to pieces. Holes are formed and they end up filling a fun viewpoint for Everly and the audience to get a peek outside and to be alerted to any potential foes on the other side.

This is also a film that wears its blatant sexualization of Hayek on its sleeve. She’s seen as an object for male pleasure throughout, and a key scene is played off screen in which she comes across the tape of her own gang rape. It’s disheartening that this is the route Lynch and his co-writer Yale Hannon went down. The threat to Everly’s flesh-and-blood daughter is enough to propel her character forward, but again and again the sexuality is needlessly played up, particularly in the last act.

The real switch in the film is the last act, where a new wrinkle is introduced that gives the film something to chew on. While we won’t spoil, one highlight I wish would have been explored more is the interaction between Everly and a guy on his last legs that ends up staying on her couch. Their interactions are genuinely hilarious and fun and it’s there that the film’s comedic touches play out in the best way: unexpectedly.

Everly finds its charm in the unique way Lynch utilizes the single-room gimmick, the energy that he brings to the film, the much-needed mythology it builds, and the simple fact that Hayek is a powerful on-screen presence. There are some genuinely great action bits mixed in with a handful that are a bit more tired, and the overall package is full of ups and downs. Ultimately, the hiccups can’t keep Everly from providing a mostly entertaining ride.

Everly premiered at Fantastic Fest and will be released by Radius-TWC next year.