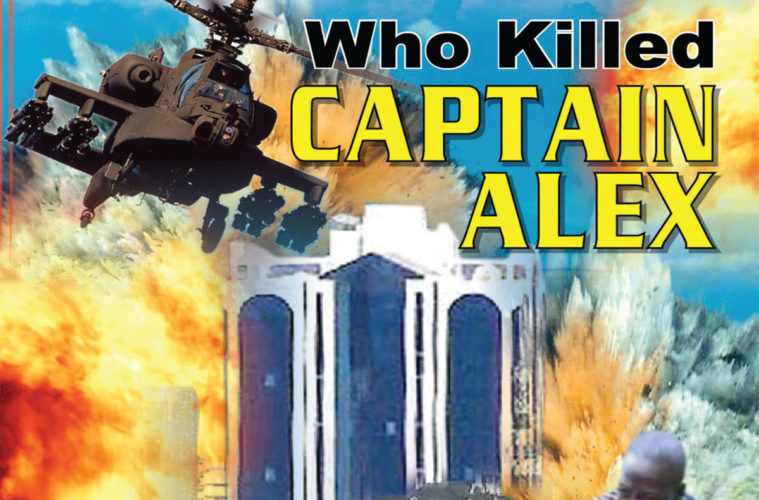 Who Killed Captain Alex? contains Ugandan commandos, kung fu, a MIDI version of Seal’s “Kiss from a Rose” as part of its score, a rambunctious (and sometimes farting) in-film commentary track, and some more super action. It’s a bat-shit crazy milestone to be honored in the film history books – those that focus on world cinema, and also the indie film projects that are equal parts genuine and gaga.

The significance of this project starts with that DIY cred; filmmaker Nabwana IGG (writer, director, producer, editor) used the people, places, and things around him in the village of Wakaliga, Uganda, with a modified car jack serving as his tripod, and with a $200 budget. And as testament to how hardcore Nabwana is as cinematic storyteller, after all of the time he spent editing this movie, he had to delete it to make space for his next one – we’re only seeing a low-resolution DVD transfer. (That last tidbit a fact shared in the opening credit cards of this film.)

Nevertheless, Who Killed Captain Alex? is the result of a filmmaker who wants to make a big movie, operating through his self-made studio that Nabwana calls Wakaliwood. The script shares that same ambition, telling of a big battle between the ruthless Tiger Mafia and the Ugandan special forces. At the center is the highly-regarded Captain Alex (Kakule Wilson), who helps hunt members of the Tiger Mafia, but is then indeed mysteriously killed. Alex’s brother, a master of kung fu (who reluctantly uses the martial art form for vengeance) is brought in to help find who murdered the captain formerly known as Alex. A lot of roundhouse kicks ensue.

Hopped up on its desire for confrontations and death as a loser’s reward, the importance of plot takes a back-seat to the chaos on screen, and that’s exactly how Nabwana wants it. Though the idea of killing a lead action hero in the middle of the story is actually pretty audacious (no tent-pole would be so nonchalant), the title question doesn’t matter. What’s most strange about the movie is why it even entertains the idea of a mystery, when it labors most of all to cut the fat from the action movies that inspire it. And what Who Killed Captain Alex? may not have in budget for car chases or hanging someone off the side of the plane, it provides in massive shootouts this side of Rambo: First Blood, in which actors hold figures crafted to look like guns and shake them, while the sound design fills in gun shots, and computer SFX offers blood spatter. Or, when it’s the movie’s giddiness for kung fu, Nabwana uses a technique for combat that’s as striking as what Steven Soderbergh did for martial arts in Haywire, by manipulating the speed of the image, just a tiny bit.

But Who Killed Captain Alex? is not a full aesthetic package without its VJ, whose commentary as a hype man/hand-holder/troll can be heard throughout the whole damn thing, taking priority over dialogue or sound effects. In this case, VJ doesn’t stand for “video jockey,” as some former MTV viewers might remember but “video joker,” related to a practice familiar to Ugandan audiences, that allows viewers to enjoy a movie with both clarity and chaos. For this film, “VJ Emmie on the m-i-c” is the voice of this movie’s attitude – carefree, hyperactive, not too involved with any of its characters, and really stoked about kung fu. He sometimes states what character is on the screen, or what the setting for a scene is (“This is Tiger Mafia.”) But when characters are crying, he mocks them with cartoonish boo-hoos. Or when the violence ramps up, he lets people know that this is “Uganda’s first action-packed movie!!!” lacking only an airhorn in his excitement. Towards the end of the movie, he gets a little bored during a Big Plan sequence, so he makes a few fart sounds. And of course, VJ Emmie’s English-speaking track is subtitled too, which for English viewers means they get two different subtitles on top of each other.

Instead of ruining the film, VJ Emmie’s boisterous presence enhances it, and fully contextualizes Who Killed Captain Alex? as an action/comedy built with inherent passion, but most of all for endless self-amusement from all corners. Compared to many bizarre films of its type, it has the advantage of coming with a clear set of terms of which to be taken with – there’s no guilt about mean-spirited laughter as with something so heavily bungled like Noel Marshall’s Roar or Richard Park & Y.K. Kim’s Miami Connection, or me having the goddamn time of my life at Birdemic: Shock and Terror at the expense of director James Nguyen’s serious environmental message. Aside from the fact that Nabwana has already posted this movie for free on his YouTube page, Who Killed Captain Alex? would probably perk the ears of most midnight madness movie houses, or even Drafthouse Films, if it looked a little more like it once dreamed of being a normal movie (and I’m sure an original higher than DVD quality wouldn’t hurt).

But for cult classic sommeliers, Who Killed Captain Alex? is a must-experience slice of unapologetic genre zeal. Nabwana’s filmmaking is the next chapter of camp, which is indeed a hell on Earth for those who hate going to big, dumb action movies, especially if a “That Guy” is somewhere in the audience, sounding off his observations. But as long as Hollywood films even just glance towards standards of intelligence and comprehension, Nabwana can have a blast doing his own singular, oddly fascinating, and unspeakably bonkers thing.

Who Killed Captain Alex? is currently playing at the 2015 Fantasia International Film Festival.