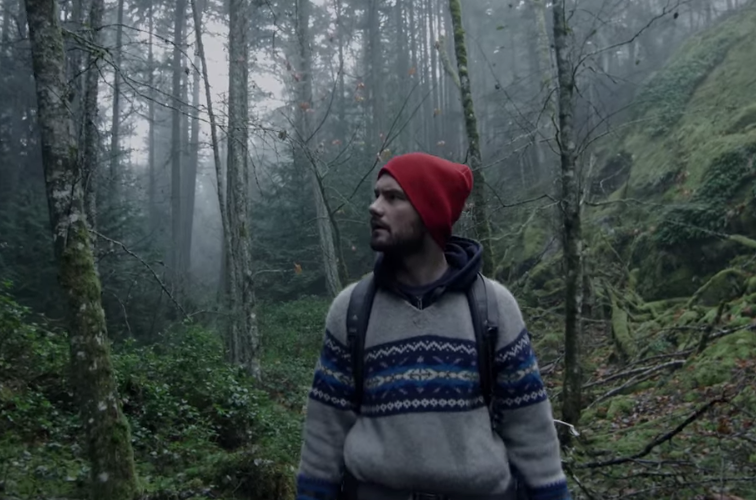 Cinema has taught us that the wilderness is a terrifying place, where wayward travelers are threatened with deadly animals, murderous locals, or, in the case of The Blair Witch Project, the supernatural. But when the elements take their toll, the mind can concoct far more horrifying things than bears, hillbillies, and ghouls. Trevor Juras explores this concept with his directorial feature debut, a psychological thriller shot in one of Canada’s natural wonders.

Newcomer Patrick McFadden carries the film as James, an office drone who quits his thankless advertising job after receiving a damning prognosis – or, at least, it’s assumed he does, as the cause behind the double vision, headaches, and numbness in his extremities is drowned out to leave room for uncertainty. He abandons his urban Toronto digs to begin life as a hermit deep in the forests of British Columbia, where he spends his days making camp, wandering aimlessly, and periodically breaking into cabins to steal food and alcohol. When a chance meeting disrupts his deviant existence, James becomes consumed by paranoia, and soon succumbs to nightmarish hallucinations filled with violence, dead bodies, and a foreboding man in a bright red coat.

Strangely, one of the indie’s most satisfying aspects is its willingness to dismiss character development in favor of pure phantasmagoria. Much like Catherine Deneuve’s disturbed beauty in Repulsion, there’s no question James’s mental state is deteriorating due to forces both internal and external. Such a condition can only lead to striking visuals, and Juras, along with his cinematographer, Othello Ubalde, are happy to deliver. Aided by high contrast lighting, slow-motion scenes, and a haunting soundtrack by Adam Osinki and Tomas Jirku, the two create imagined horrors that intensify with each plunge into the protagonist’s tormented psyche, which produces a few indelible images (the sight of the red-coated man’s gaping death maw will surely stick with me).

To capture his character’s drastic life change, Juras presents the story in two distinct parts (the title card acts as a mid-film break), and while the disregard for background and motivation serves the second chapter well, it renders the first half lacking. Presented as a mumblecore-esque comedy, the build-up depicts James’s frustrating passive-aggressive approach to life – even before he literally heads for the hills, he escapes into fantasies where he’s the office hero telling off his obnoxious boss, or in a sound studio spitting rhymes. While one of the sequences does feature some of the worst rap lyrics ever committed to film, the rest aren’t particularly amusing or insightful. They instead paint James as the kind of inconsiderate jerk who doesn’t tell his girlfriend he’s moving away until the last minute, an effect apparently meant to detract from sympathizing with him once the scares commence.

The beginning does fall in step with the film’s overall desultory tone, but its obvious comedic intentions clashes with the more outrageous second half, which, depending on how morbid the viewer is, could elicit either laughter or gasps. Based on the disparity in quality between the two sections, the first half feels more like an afterthought written when the outdoor shoot wrapped and Juras realized his character needed a reason to run to the woods in the first place. However, it’s worth overlooking The Interior‘s lopsided narrative structure in order to enjoy all the stylish, trippy, genuinely frightening moments it has to offer.

The Interior is screening at the 2015 Fantasia International Film Festival. See the trailer above.