Fantasia Review: Mali Elfman’s Directorial Debut Next Exit Imagines a World Without the Fear of Death 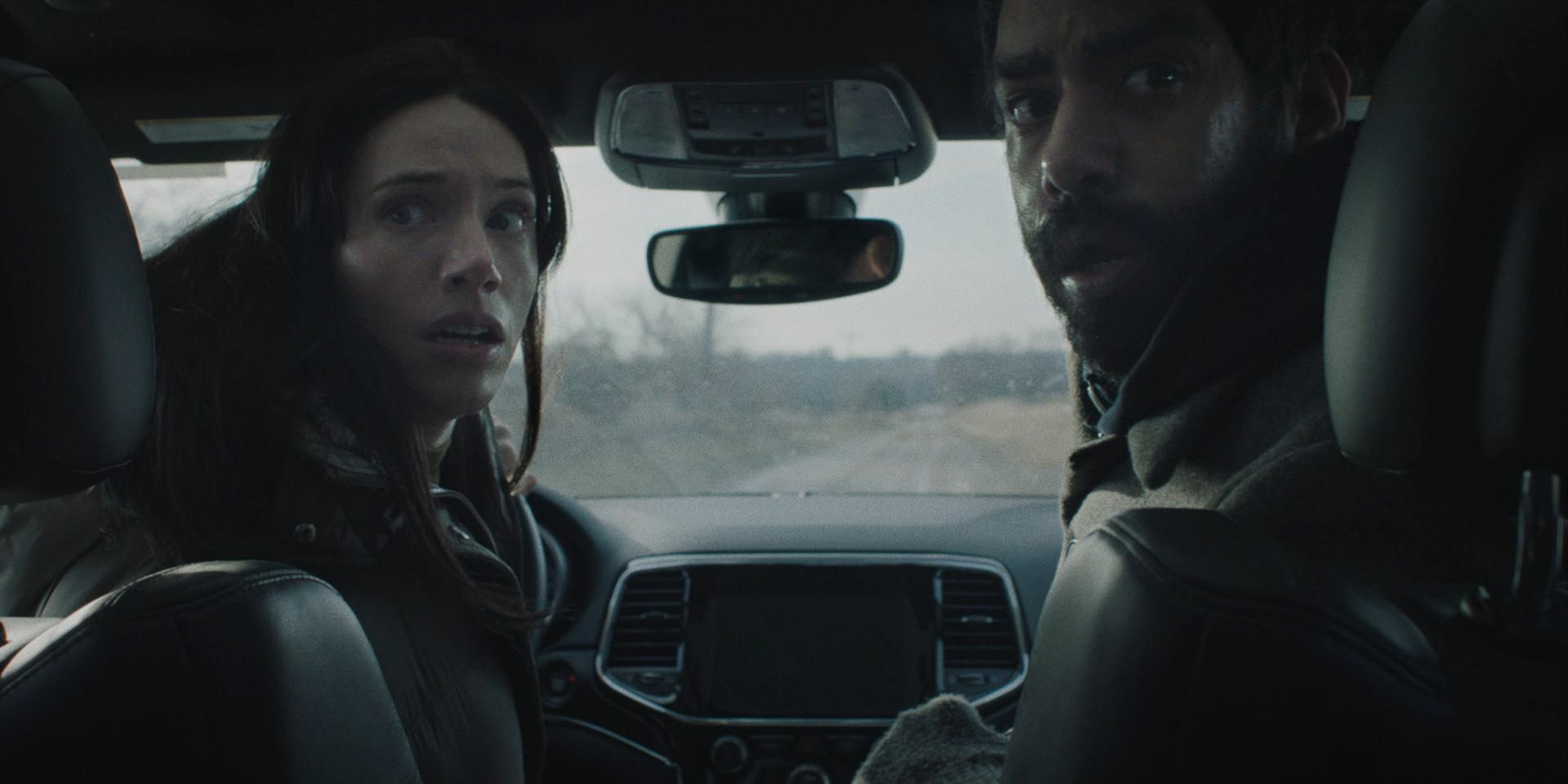 While a viral video of a young boy playing cards with his dead father captured the nation so profoundly that suicides and murders have skyrocketed due to humanity no longer fearing death, allowing every single ghost to be seen by every single human on Earth would be quite the logistical issue for debut writer-director Mali Elfman. Having started crafting Next Exit ten years ago, she’s had plenty time to tweak and hone her script in a way that allows the high-concept, supernatural / sci-fi conceit to dissolve into the background so its heartbreakingly bittersweet, uplifting drama about two people who spent their lives wondering if living was worth the pain can shine through. The questions must still ultimately outnumber the answers.

Don’t therefore treat the fact that no one can see the ghosts other people do as a plot-hole. Just because we saw that boy’s father in the digital camera’s viewfinder doesn’t mean his spirit was seen on the video uploaded online. It’s about the hope that the discovery provides the masses. It’s about the newfound escape death suddenly achieves for a nation mired in poverty. Is it truly better to live homeless and destitute than it is to walk the streets without a body, bills, or responsibilities? Dr. Stevensen (Karen Gillan doing her best Elizabeth Holmes) knows it’s not for many. It’s why she’s created Life Beyond to study the phenomenon and learn about the afterlife by recruiting volunteers willing to sign over their souls to the cause.

Rose (Katie Parker) and Teddy (Rahul Kohli) have enlisted. The “why” comes later. For now we just see two people ready to put a lifetime of troubles behind them. She’s enjoying the freedom afforded by having no tomorrow. He’s excited that his death may finally grant his life meaning after failing to find any while alive. And they’ve both decided to drive coast-to-coast from New York to San Francisco rather than fly—each subconsciously supplying one last chance to confront their most powerful demons in-person along the way. Unfortunately, car rental services haven’t yet updated their protocols for dead-people-walking. Rose didn’t think she needed a credit card (Life Beyond paid) and Teddy thought five more days of validity on his license was enough. They were both wrong.

He’s got the credit, she’s got the license, and their destination is the same. Why not team-up? There are many reasons, of course. Namely: Rose doesn’t get along well with others and Teddy’s gregarious personality is the kind that causes people to not want to get along well with him. She won’t let him drive. He won’t let her have any silence. It’s a lively getting-to-know-each-other period full of sarcasm and insults, both parties doing everything in their power to make life miserable for the other once they discover how easy it proves. But something must give. At some point they’re going to drink a little too much and let their guard down. It’s in that state of naked vulnerability that their difficult truths lie.

It shouldn’t be a surprise that Next Exit isn’t a comedy solely looking for laughs. The characters’ bitingly acerbic personas are defense mechanisms easing us into the plot, preparing them for their inevitable confrontation with ghosts no one can see. That’s not to say they’re completely alone. Rose is desperate to avoid the dark silhouetted visage she believes is her mother torturing her for not being there when she died. What’s so smart on Elfman’s behalf, however, is that she realizes not knowing for certain is the more potent direction to turn. Just because ghosts are real doesn’t mean we don’t have the propensity to still imagine them out of grief and guilt. Maybe the only thing haunting Rose is Rose herself?

That’s the case with Teddy. His broken dreams and revenge-fueled ambitions have left him in a state of perpetual limbo. The person he hates the most is still alive; he sees nothing in the mirror or out the corner of his eye like Rose. All Teddy sees is a past he’s ready to expunge by rewriting his story as a pioneer on Dr. Stevensen’s quest for clarity. It’s why he jokes so often. He needs the distraction from remembering the fact he’s giving up on everything regardless of the package Life Beyond uses to pretty-up that decision. We see it when his smile drops the instant Rose makes things real for him, the same way her scowl drops even further when he does the same to her.

Where they can avoid the complexity of and fear born from their situations while alone, they can’t together. Part of that is seeing their pain in the other—a kinship that simultaneously reminds them they aren’t alone and that they aren’t inherently bad people for enduring it. The moment you start wanting to help and fix the other is the moment you allow yourself to think you too can be fixed. Doing this thing is no longer the only choice anymore. Hearing the stories of others (Tim Griffin’s John offers up a doozy that reveals Elfman isn’t messing around) provides more comparison points; second thoughts start to creep in. Maybe Rose and Teddy will listen and rethink. Or maybe it’ll only confirm their hopelessness.

We won’t know for sure until they confront their respective demons. It doesn’t matter if they fall into the cliché of heightened emotions opening them up for romance—for better or worse, that’s where these scenarios usually trend. It’s what Elfman does with them when that romance arrives that determines, whether her film sinks or swims. Love and lust and companionship are just Band-Aids. If they were really the fix Rose and Teddy needed, they would have been “cured” of their depression long ago. The trick is finding those things with an equal who understands the lives they have led. It’s about leaving judgement at the door and wondering if maybe this time can be different. Sometimes, as in real life, that discovery may come too late.

No matter where these characters end up, though, Parker and Kohli give them everything they have. The sardonic masks. The unchecked aggression. The unbearable suffering. These two characters are literally driving to their deaths—no need to hold anything back. Decorum and secrets are wasted. The trick is thus what happens when Rose and Teddy begin to see their honesty in the other’s mirror right alongside their pain. Calling the other on their bullshit is calling yourself on yours. Seeing the ghosts in your periphery as evil is nothing more than seeing yourself as deserving their wrath. So break through that barrier. Admit the truth. Maybe things won’t get better, but what’s one more day to keep believing that it might? Eternity isn’t going anywhere.

Next Exit screened at the Fantasia International Film Festival.