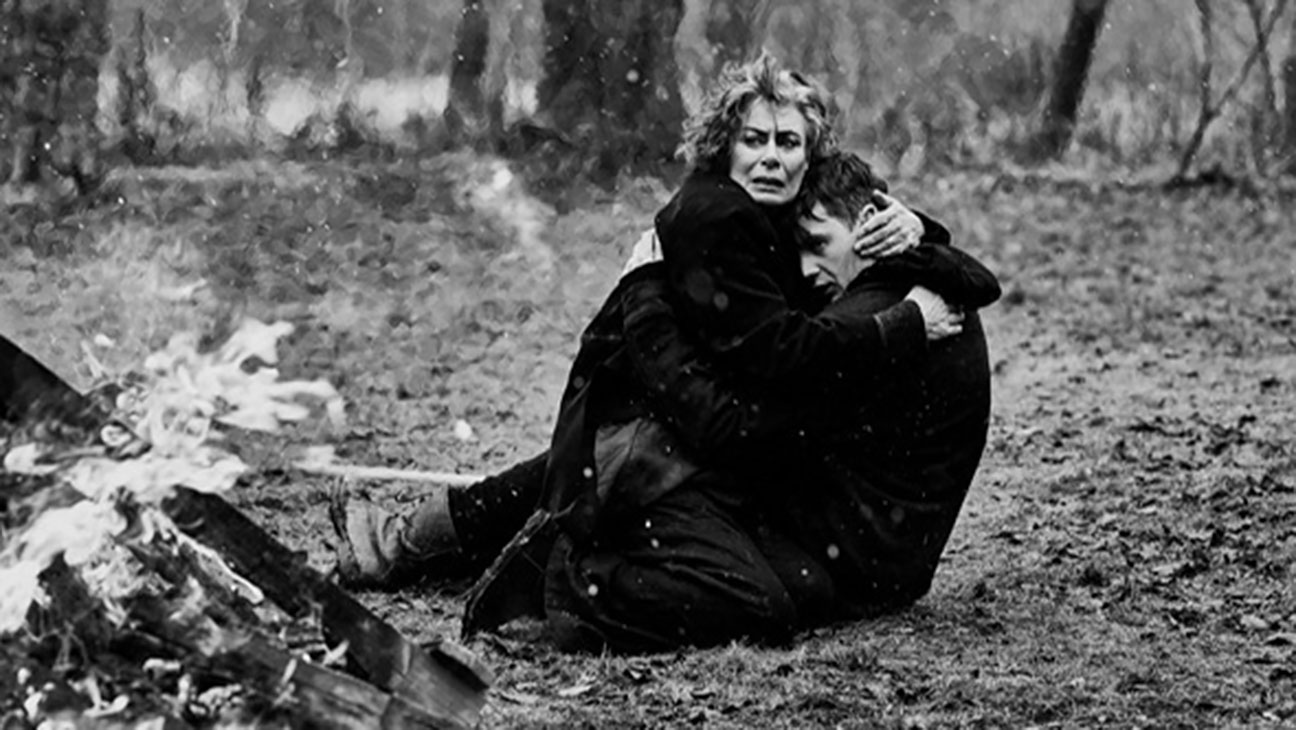 After helming a number of shorts over the years, Canadian actor Mark O’Brien—who has appeared in major mainstream films like Arrival, Bad Times at the El Royale, and Marriage Story, and had a recurring role on the AMC series Halt and Catch Fire—makes his feature directorial debut with The Righteous. The film, shot entirely in brooding black-and-white, follows ex-priest Frederick Mason (Henry Czerny, who co-starred with O’Brien in 2019’s Ready or Not) as he and his wife Ethel (Mimi Kuzyk) are struck by the tragic, accidental loss of their adopted daughter. “Have you ever considered that you aren’t even with God?” Frederick questions of his local priest following his daughter’s funeral, portending both the ensuing plot and method by which such thematic questions are to be answered. Though The Righteous works best by showcasing the acting skills of its talented cast, it’s ultimately bogged down by its literalist, overly verbose approach to spiritual atonement.

In the aftermath of their daughter’s death, the Masons are fortuitously visited by a mysterious stranger needing their help. During the middle of the night a man named Aaron Smith (O’Brien) is found writhing across the Mason’s backyard, wounded and crying for assistance. Though Frederick answers Aaron’s pleas, he’s hesitant to allow the young man into his home—not more-so than Mimi, who is utterly repelled. There’s something not quite right about that boy—but there’s nothing really wrong either, other than his supposed physical injury. He’s maybe a little too friendly, too inquisitive, a little too interested in Frederick’s life and eager to disclose about his own. After a revealing, late-night conversation with Aaron punctuated by an intense moment that may or may not have been the product of a dream, Frederick awakens to find his wife has had a drastic change of heart: she has taken to Aaron expediently, the two of them found singing and making pancakes together in the kitchen.

Frederick allows Aaron to stay a while longer and the two of them begin to bond. Aaron acts almost like a replacement child for the Masons’ deceased daughter, the latter of whom is revealed early on to have been adopted from a young, local woman named Doris (Kate Corbett), who is incredibly neurotic and hadn’t been a suitable mother at the time of her pregnancy. But through Aaron and Frederick’s interactions with one another it is slowly laid bare that Frederick is not the holy man whom he’d once sought to embody. Aaron knows a little more about Frederick’s life than he let on, and Frederick has a thorny past that he’s worked hard to keep hidden over the course of 20 years while attempting, in his own way, to make peace with God—a past Aaron may or may not have been tangled in himself. Thus it’s Aaron’s complicated involvement in Frederick’s life that starts leading the story of The Righteous astray. As more crucial pieces of info become clear they also become increasingly muddled, revelations between Frederick and Aaron reminiscent of a meme in which two identical Spider-Mans are pointing at one another. When so much is exposed too early on it’s hard to feel worth sticking through the very end, as the film’s bulk becomes hinged on diatribes that prove less shocking the further this narrative goes.

The Righteous is overwhelmingly performance-driven. This is not a weakness per se: Henry Czerny (recently seen on Sharp Objects, soon to reprise his role as Eugene Kittridge in the next Mission: Impossible) is both captivating, broken, and conflicting. The uncovered sins of Frederick’s past are not necessarily meant to act as a deterrent from his previously sympathetic persona. Czerny’s performance expertly positions Frederick in a place of both empathy and disgust—it complicates how we perceive his humanity, not by justifying his past actions but by forcing us to nevertheless view him as human. Simultaneously it makes us question whether he is deserving of the forgiveness desperately sought. Mimi Kuzyk and O’Brien are also exceptional in their portrayals of Ethel and Aaron, respectively, O’Brien allowed a showcase by adopting a southern twang and launching into extended monologues.

That’s ultimately what holds The Righteous together: these monologues and protracted conversations between characters in which the entire story of each is explained to us. Czerny, Kuzyk, and O’Brien all get their own moment (or moments) to display abilities in maintaining sustained bouts of well-delivered dialogue, but it only serves to create an experience entirely too centered on exposition. In a narrative about religious penance with—albeit, somewhat bafflingly—supernatural flourishes, the script (also penned by O’Brien) is far too reliant on taking the most literal approach possible to its gray subject material. It adds a curious dimension to shooting the film in black-and-white (cinematography credited to Scott McClellan). The Righteous fully embraces murky middle ground of human nature but is far too hesitant to embrace a similarly obscure narrative approach.