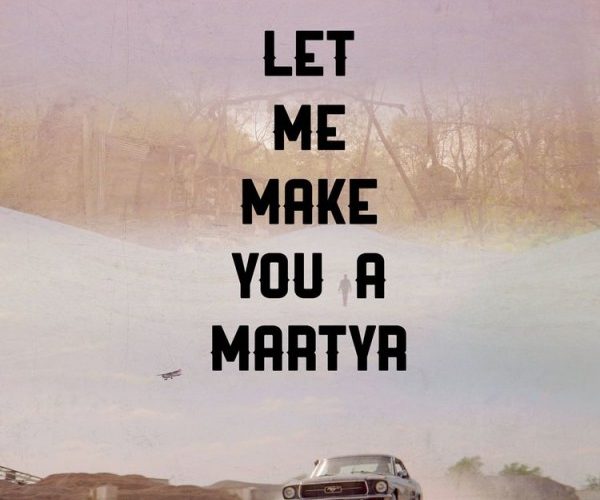 [Fantasia Review] Let Me Make You a Martyr

There’s a lot more to Corey Asraf and John Swab‘s debut feature Let Me Make You a Martyr than meets the eye. It looks like your run-of-the-mill revenge thriller with its prodigal son (Niko Nicotera‘s Drew Glass) returning home after an extended stay away to right the wrongs of the past. His adoptive father Larry (Mark Boone Junior) is a drug supplier, sex trade entrepreneur, and who knows what other heinous crimes that set up whatever unknown incident happened to fracture their relationship—something neither can come back from without the other being dead. But before Drew can set things straight and escape this Oklahoma town for good, he must also find his adopted sister and one true love June (Sam Quartin). Without her the rest is meaningless.

We infer it was systemic abuse and exploitation that turned Drew against his father. Why else would a guy like Larry take two strangers in as his own? Maybe the boy stole something in response to this suffering or worse. All we know for certain is that the welcoming party is armed and ready to end his return quickly. Things obviously turn out differently or there would be no movie, but where Drew moves from here is less concrete. Asraf and Swab reject linear narrative, starting in the present with Brown (Gore Abrams) at the wrong end of Native American hit-man Pope’s (Marilyn Manson) gun before shifting to the not-so-distant past of Drew in police custody (opposite Michael Potts‘ mediator Charon). The latter’s conversation explains what we’ve missed. So the film unfolds in flashback with carefully chosen frames of horror popping up at key words to foreshadow this nightmare. Charon is interested in what happened to force the police to take Drew into custody. He’s not being charged, but he’s definitely far from innocent. Tired of the darkness that being raised by Larry wrought, Drew decides to spill the whole story so we can see where the players come from and what it is they do. We meet Hondo (Slaine), a trailer park heroin dealer moonlighting as a kidnapper whose victims become collateral until their parents pay what he’s owed. There’s also blind priest Father Francis (Michael Shamus Wiles) and Drew’s junkie, gambling fiend of an uncle Marv (Daniel Martin Berkey) waiting in the wings.

Every interaction is crucial to where Drew and June end up whether vile entities to be purged along the way or kind-hearted yet damaged steppingstones for Pope to follow on his quest to find the boy and put him down. Larry’s so afraid of what Drew may do to him through this apparent rampage that he makes the backwoods journey to hire Pope’s cold-blooded psychopath despite being cognizant of the man’s code and unpredictability. So many times these pieces on the board cross paths without bullets being fired, the painful anguish and abuse shared proving more volatile than death ever could. In fact, death almost becomes a God-sent light at the end of the tunnel. No one here is scared to die and some actually embrace the opportunity. Asraf and Swab have rendered killers and junkies as heroes against abusers and users deserving much worse fates than are provided here. Do they want us to hope Drew and June make it out alive? Not necessarily. They know they’ve drawn these characters too gray for us to truly wish for redemption. Instead the goal is closure. We want them to follow their path because we know the people they are after are more despicable than they could ever dream of becoming. It may be imperceptible to the eye, but these two still have a remnant of the innocence they possessed before finding themselves on Larry’s doorstep. They still appreciate what innocence is, enough to even seek its preservation in those yet to be drained of its power.

And they aren’t alone. Despite the bloodshed and violence occurring within the world of Let Me Make You a Martyr, those pulling the triggers have reasons for their actions. The complexity given Potts’ Charon and Manson’s Pope is immense, both operating under alternative motivations than assumed to help move the journey forward in unexplainable ways. They are outsiders looking in with much more sway than you’d expect. The clock is ticking and they are in control of which pieces are able to run freely and which must be expunged. The cleansing Drew seeks in his attempt to retrieve June and leave before it’s too late isn’t his alone. Order has been broken and his return makes it so that those biding time can finally move to restore it.

Suddenly metaphysical thoughts enter as mortality is defined with deeper meaning than life and death. The darkness encompassing them is so blinding that the vacuum of nothingness proves a welcome replacement. When Drew and June are first introduced via flashback they’re set on vengeance and ready to meet their maker in a blaze of glory if escape was no longer an option. This black and white outlook shifts, though, once they become guardians to a young girl Hondo held captive named Rooney (Gracie Grenier). She conjures a flood of memories from their own childhoods, her complete inability to do anything about her situation a trigger pulling them back to the moment Larry entered their lives. Already lost, they now have the power to save Rooney from that fate.

Events come at lightning speed with past and present melding into one. Deaths pile with some faces in shocked repose and others knowing smiles of release. Some moments appear contrived, but I won’t lie and say Asraf and Swab don’t present them with an uncertainty able to set our minds racing with new hypotheses and possible connections. The performances are authentically drawn if a bit melodramatic when philosophical underpinnings of decisions are vocalized aloud; the choice to keep every extinguishment of life off-screen profound to have us questioning whether everything is God’s will rather than the Devil’s. Amidst the tragic nightmare of this world, Drew and June retained some humanity. It may not save them, but it might just stop this merry-go-round long enough to save someone else.

Let Me Make You a Martyr‘s premiered at Fantasia International Film Festival.