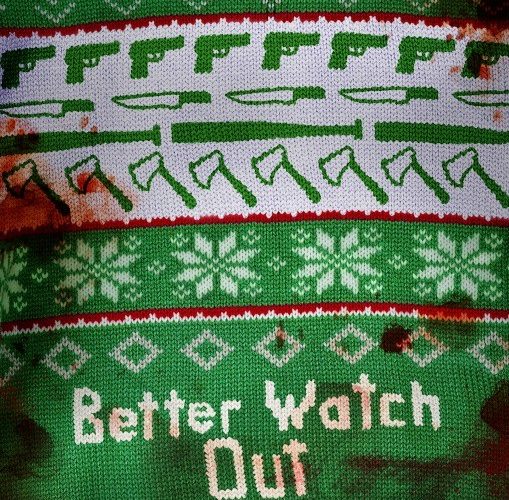 It’s Christmas and songs of carolers are in the air of a quaint suburban neighborhood populated by houses big enough to list four bedrooms yet safe enough to not need alarms. Perfectly imperfect families live inside them like the pulls-no-punches Deandra (Virginia Madsen) and affably self-deprecating Robert (Patrick Warburton) showing how love can take and sometimes excel with a little argumentatively sarcastic friction. They may drink and swear, but they’d do anything for twelve-going-on-thirteen year old son Luke (Levi Miller)—and he knows it. A sensitive kid with lofty aspirations to show his babysitter Ashley (Olivia DeJonge) why he’s a better suitor than her revolving door of inconsiderate brutes, the time to make a move is now since college is a couple months away from separating them forever. Writer/director Chris Peckover does a wonderful job setting up Better Watch Out‘s wholesome atmosphere like holiday genre-benders of the past. Think Home Alone (for multiple reasons) and especially Gremlins with innocuous situations built to prove anything but. He and co-writer Zack Kahn aren’t trying to fool us either when the initial scene of Luke and best friend Garrett (Ed Oxenbould) supplies sexual innuendo and mature-beyond their years conversation to counter innocent faces and embarrassed frustration when Mom enters to remind about curfew. There’s always some bark beneath the tinsel, the bite still hidden until a complete reversal of perspective and roles arrives around halfway through. The usual tropes are here (parental absence, babysitter boyfriend lust, and young puppy love), but don’t expect their inclusion to follow convention.

The general premise is as follows: Luke has learned through internet research that fear releases dopamine and therefore targets the brain’s pleasure center, so maybe he’ll have a shot at kissing Ashley if the two watch a scary movie. Unbeknownst to him, the horror will soon increase exponentially courtesy of a real-life home invasion. Suddenly the fight or flight reflexes are permanent, Ashley is grabbing hold of Luke’s hand to run and hide, and the thought of this being the end begins to manifest. Maybe they can make a stand against the knife and shotgun-wielding intruder with Robert’s handgun. Maybe they’ll be able to scream for one of the carolers outside to call the police. It’ll take some ingenuity to escape unscathed—something Luke has in spades.

And this is where plot talk becomes a detriment to your enjoyment. Something very specific is happening of which you’ll soon be made aware, but until then the less you know the better. Thankfully no trailer exists yet (not even from when the picture was known as Safe Neighborhood before securing US distribution). If Well Go USA finds a way to market it without giving its secrets away I’ll be very surprised since so much of the chaos and carnage necessary to sell horror thrillers occurs after its somewhat unexpected narrative pivot. Only a short teaser has been released that gives nothing away but a mix of menace and humor. While the finished product has ample amounts of the former, I would have liked more of the latter. It’s a tough balancing act when deciding to go as dark as Peckover and Kahn (a former “MAD TV” writer) are willing. The pieces they prop up may appear perfectly suited for irreverent humor due to incongruous relationships with their own tropes, but the filmmakers don’t fully embrace that direction. Instead they take things where they should go in context with this type of circumstance: a place of cynicism and pessimism like your usual R-rated thriller uninterested in innocent children constantly does. As such the events become even darker both by what they’re willing to have happen to pre-teens and what they’re willing to let pre-teens do. The line is razor-thin between it being able to captivate audiences with unexpected developments or lose them by going too far.

They unfortunately lost me for much of the runtime after going behind the curtain. There’s some strong developments at the start as far as characters being introduced and dynamics being constructed. Madsen and Warburton are only onscreen for a brief moment but their rapport adds to the slightly off-balance utopia that Miller’s awkward romancing continues. DeJonge is great at deflecting the boy’s feelings and diffusing situations even as her boyfriend (Aleks Mikic’s Ricky) supplies ample reason for her to perhaps take Luke’s affection as a seriously welcome alternative. Add the overly exuberant Oxenbould as wing-man/wild card and you have yourself a sweetly charming first act with the room to get bloody while still retaining that heart. As most tales of psychopathy go, however, heart becomes a liability.

There arrives a pretty sharp disconnect once night falls and terror takes hold because the villain is still somehow positioned as the character we’re supposed to care about. Even though the film alters its victim/predator construct, we’ve invested in a way that renders it difficult to relinquish our expectations. Rather than enjoy the bloodshed to come as films like this generally desire, we watch a nightmarish descent into hell of someone we hope may still escape what’s been wrought. On one hand this is commendable: to create a horror film wherein we aren’t entertained by the violence. On the other hand, though, it makes it impossible to confidently adhere to the action. Rather than hope the person tied up survives, we hope the person in control shows contrition. The early moments of act two are trying as a result. Attempts at humor come with insidious intent to make the predator more vicious instead of alleviating audience stress. The escalation of danger pushes us so far from where we began that the whole feels like two completely different movies, the transition so starkly abrupt that I found myself out-of-sorts for far too long. Peckover rights the ship eventually—or wears us down to the new world order—but I’m unsure our blind acceptance is earned. The first half doesn’t set-up the second as much as shield us from its diversion. Some contextual history is given at the very end, but not before I questioned whether I was watching a prank rather than life-or-death situation.

Only when I was certain of the stakes could I sit back and let the proceedings unfold, my skepticism evaporating to appreciate the sadistically laid plans. Now I could enjoy the production value, high concept, and chilling performances outside of how they serve to mask one startling reveal. I delved deeper into the characters to see what was act and what was truth while also embracing the filmmakers’ fearless nature to ensure everyone onscreen is expendable. Even so, the climax does come off as too sloppy for how airtight the plot believes itself to be. The overall structure and final surprise may be commendable on an intellectual level, but not an emotional one. Sadly the desire to shock distracted everyone from seeing how that jolt exposed its strings.

Better Watch Out screened at the Fantasia International Film Festival and opens in limited release and on demand October 6th.