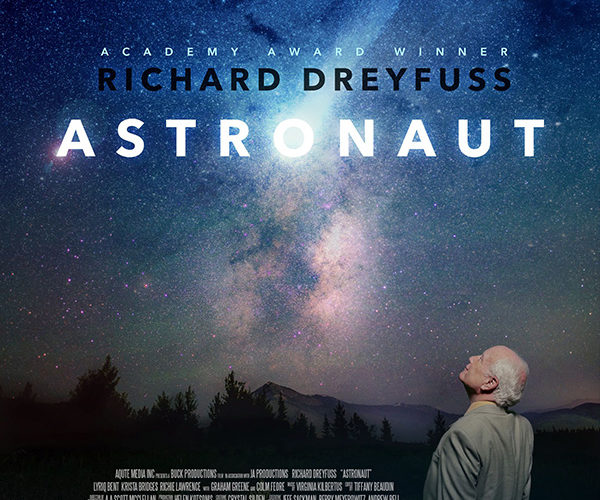 It’s the beginning of the end for Angus Stewart (Richard Dreyfuss). His wife recently passed after a difficult and costly bout with dementia, his heart isn’t what it used to be, and his family is unsure about what to do to help him adjust. While his daughter Molly (Krista Bridges) and grandson Barney (Richie Lawrence) want him to move in, his son-in-law Jim (Lyriq Bent) can’t help wondering if enduring the strain of another aging parent on a daily basis isn’t good for his wife’s health. Angus will honestly agree to whatever course of action they decide because he knows the inevitable burden being in their house creates whether they’d admit it or not. As long as he can still look up at the stars, he’ll live anywhere. So of course he grows giddy with excitement when writer/director Shelagh McLeod gives him the chance to be amongst those stars to look back upon Earth. The opportunity arrives in the form of a lottery event wherein one lucky American will win a seat on Marcus Brown’s (Colm Feore) revolutionary Ventura Space Program’s private shuttle launch. Angus doesn’t fit within the age criteria, but what’s ten years in the face of living his childhood dream? And with a comet slowly moving through the sky to provide him good luck, he just needs a little celestial help to become one of the twelve contestants chosen from hundreds of thousands of entries. As a retired civil engineer who’s as cool as a cucumber at press conferences, he’ll handle the rest.

McLeod’s Astronaut isn’t really about this once-in-a-lifetime opportunity, however. We’re literally introduced to Angus as a doctor tells him to avoid strenuous activities, so the thought of him battling insane g-forces while leaving the atmosphere doesn’t seem likely. And since this is a family film that leans heavily upon his relationship with his grandson, McLeod isn’t trying to kill him on-screen either. That’s not to say things don’t come close, though, considering the pressure put upon him by TV cameras and the bright lights of a live interview meant to appeal to a public vote. Angus is pushing himself well beyond his limits and in the process dragging his family down with him. They want to see him happy, but that means he also needs to stay alive. The choice to make his former occupation known (and to let him mutter under his breath about why the road he walks his dog on is eroding) isn’t merely for color and in fact has more to do with where things go then you might initially assume. Because while Marcus has accounted for everything to put his craft in space, problems on the ground might cause it to fail before flight can commence. You have to then wonder if that comet wasn’t just about Angus, but the billionaire tech giant too. Maybe it can assist the former in becoming what he’s wanted to be for over a half century and perhaps it will save the latter from the crippling blow any potentially devastating tragedy might deliver.

In the end Angus will discover that dreams must sometimes be sacrificed for others to come to fruition. But he also realizes that one dream can grow and enlist countless others who get to go along for the ride. It’s not just Barney that becomes electrified about his grandfather’s opportunity, but the new retirement home friends too. While Joe (Art Hindle), Alice (Jennifer Phipps), and Frannie (Joan Gregson) simply enjoy being close to someone their age with the unlikely ability to travel through space, Len (Graham Greene) sees it as an imperative that moves well beyond the act itself. Here’s a non-verbal, wheelchair-bound resident everyone ignored because the effort to understand him was too high. Angus conversely gravitated towards him, knowing how appearances can prove deceiving. And that’s the real lesson here. Just because Angus looks like a crackpot retiree spouting conspiracy theories because he used to be an expert in his field two decades prior doesn’t mean he’s wrong. Jim falling prey to son-in-law tropes doesn’t mean he’s a bad guy and the Stewart family matriarch getting fleeced by a salesman to purchase a donkey farm they couldn’t afford doesn’t mean the animals aren’t worthy of the love this group could provide them. Things happen for a reason and good can come out of bad if you’re willing to own up to your mistakes and truly seek to make a difference upon learning from them. And just because these are saccharine sentiments inside a generically dramatic trajectory doesn’t discount their inherent worth.

A big part in combating the otherwise obvious plotting and overt coincidences beyond their family-friendly messaging is that Dreyfus commits to this performance. He’s not phoning it in because the budget is low or the set pieces hokey (he actually instigates a dance scene with a bunch of septuagenarians like it was straight out of a Peanuts cartoon). With purposeful actions and emotional gravitas, his Angus is accomplishing exactly what he must to know he gave it his all so those he loves can dream as he always has. That glint in his eye when the Ventura contest is announced on TV proves infectious because it exists despite his knowing he cannot at that point submit his name. Knowing some other anonymous space-lover like him could was enough.

Astronaut is now playing the Fantasia International Film Festival and opens in limited release on July 26.