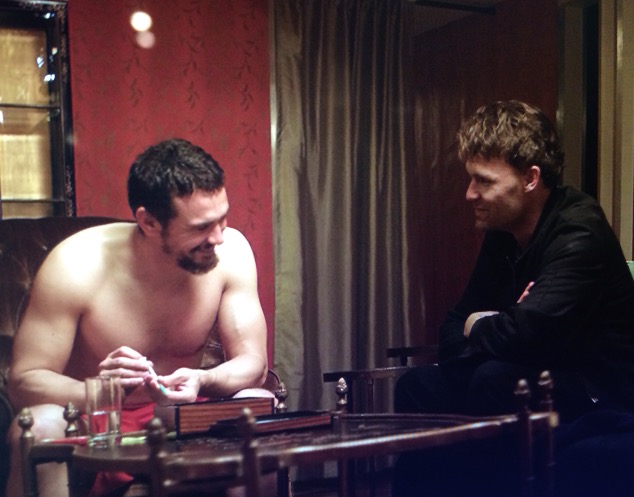 Following the premiere of three films earlier this year, I Am Michael, Every Thing Will Be Fine, and Queen of the Desert, James Franco has now embarked on his latest production and we’ve got the exclusive first images and details. Based on Franco’s own novel, Actors Anonymous is a unique filmmaking experiences in that it is being helmed by over 10 of the top emerging directors coming out of USC Film School.

Exploring the lives of young actors in Hollywood, from the highs to the lows, to the lies and the heartbreak, the ensemble is led by Scott Haze (Child of God and upcoming Midnight Special). He plays a heroin addict named Sean struggling to stay clean in the thralls of Hollywood life while trying to be a good father to his two sons, all while pursing his dream of acting. Franco takes on the role of Jake Lamont, a larger than life celebrity, who befriends Sean.

The film also features Beth Grant (Donnie Darko, No Country For Old Men) as Sean’s mother, Jake Robbins as Ben, a young aspiring actor who recently moved to Hollywood, Eric Roberts (The Dark Knight, Inherent Vice) as a maniac delusional ex-actor turned failed writer and Saturday Night Live‘s Horatio Sanz as a McDonalds employee who is fascinated by Sean’s good looks. Emma Rigby (Once Upon a Time in Wonderland) plays a Hollywood starlet, while Keegan Allen (Palo Alto) portrays a young acting student, and there will be cameos by Elissa Shay, Cynthia Murell, and Brian Lally.

The film is produced by Jay Davis, Rabbit Bandini Productions and overseen by Franco and John Watson of USC Film School. Check out the exclusive first images above and below.

Actors Anonymous is currently shooting in Los Angeles and expected to premiere in 2016.