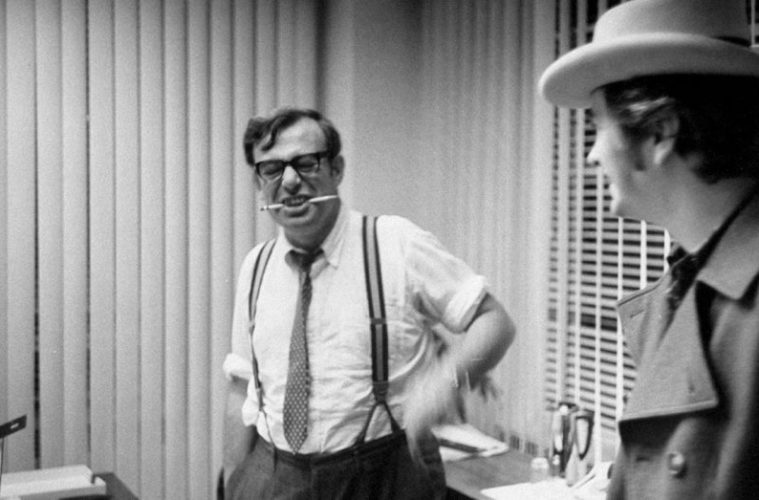 The history of movie culture is full of colorful characters committed to elevating the experience. Donald Rugoff’s exhibition and distribution company Cinema 5 paved the way for a second generation of companies enhancing cinematic culture like the studio (sm)art-house divisions and Landmark Theaters, and then a third wave of companies like the Alamo Drafthouse and A24, turning movie-going into an event. In Searching for Mr. Rugoff, film distribution veteran and producer Ira Deutchman goes back to an early mentor, inspired by a speech given by the great exhibitor Dan Talbot (proprietor of Lincoln Plaza Cinemas and New Yorker Films) at the IFP Gotham Awards several years ago. In the speech as told by Talbot, Rugoff moved to Marthas Vineyard after having lost his company and started showing films in an old church.

Searching for Mr. Rugoff paints a vibrant picture of a specific era of moviegoing in New York City, in particular uptown, where movie palaces like the Paris, Beckman, Paramount, Sutton, and Cinema 1 & 2 flourished with top-notch film product. His theaters were higher-end when compared to the venues owned by Nick Nicolaou, the exhibitor who starred in Abel Ferrara’s documentary The Projectionist from earlier this year. The effects of the disappearance of top-notch theaters to launch a film in New York are felt downstream in smaller markets, which looked to the Talbots’ taste in programing the now-defunct Lincoln Plaza Cinemas. Deutchman draws upon his contacts in the film world, both at Cinema Five and rival organizations to paint a definitive portrait where none exists. Despite his influence in releasing some of the most popular films of all time like Monty Python and the Holy Grail, there is very little history of Cinema 5.

A family theater chain known for elevating the cinematic experience with lavish lobbies and luxurious theaters that attracted a more sophisticated audience, Rugoff would eventually end up getting into film distribution and become the only game in town for documentary films, including Harlan County, USA and Pumping Iron. His output was as varied as A24 and Neon, championing global filmmakers like Lina Wertmüller, François Truffaut, and Costa-Gavras while also releasing edgier titles like Andy Warhol’s Trash and Robert Downey Sr.’s Putney Swope. This era faded as major studios, in a bid to adapt to a youth audience, started distributing work from exciting new voices and launching their own “classics” division. This is where Deutchman made a name for himself, eventually launching New Line’s Fine Line division. Searching for Mr. Rugoff captures a central figure in the exhibition and distribution of independent and global cinema, pushing Costa-Gavras’ Z into the mainstream conversation as it continued to rack up Oscar nominations beyond the foreign-language category. Working with archival materials and interviews with those that collaborated with Rugoff, including filmmakers and staffers, Deutchman paints a portrait of a guy who was more interested in the pursuit rather than the win. The disheveled Rugoff, we learn, was not without his quirks from falling asleep in screenings to locking his marketing executives in a room until they came up with a campaign for the David Bowie-led The Man Who Fell to Earth. (They ultimately concluded the film couldn’t be understood after only one viewing and gave patrons a wrist-band that enabled them to come back and see the film again at Rugoff’s Plaza Theater.) He, of course, could be mean, vindictive, and competitive, having two secretaries on at all times in the event one quit mid-work day as was known to happen around the office.

Films like Searching for Mr. Rugoff offer cinephiles a chance to step back in time and revisit a moment in history when major classics were considered fresh and where patrons would line-up around the block hours in advance of their showtime to be part of the collective cinema experience. While the modernist architectural flourishes of Cinema 1 & 2 (now Cinema 1, 2 & 3) still exist as the last Cinema 5 house that’s still showing movies, gone are the days of the carefully constructed window displays Rugoff commissioned for each movie playing as are the days of hiring live performers to entertain patrons on line. Now that event experience is relegated primarily to the film festival despite the best efforts the more experiential exhibitors who are opening lounges and hosting filmmaker Q&As in an effort to make moviegoing the collective event it once was before reserved recliner seating and streaming.