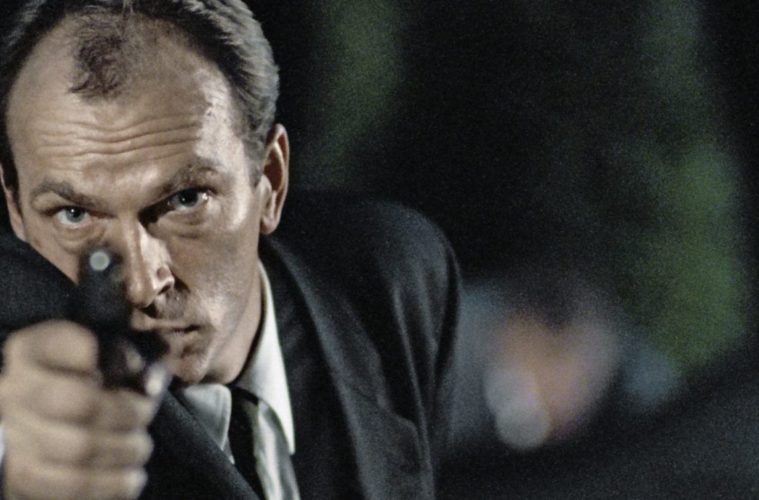 Consider West German cinema and the familiar crop of names will rear its head: Fassbinder, Wenders, Herzog, Schlondorff… and, barring expertise, it’s here that the gas starts running low. To our fortune, New York’s Quad Cinema (working with programmers Dominik Graf and Olaf Möller in series co-presented by the Goethe Institut) are about to commence the delightfully named” Fighting Mad: German Genre Films from the Margins,” which seeks exposure for an entire swath of, to quote Graf, “masters of the expressive, the outrageous, the subversive – they show how it looks and feels when the proverbial Teutonic order collapses and things go ballistic.”

If you aren’t in New York City, allow their program list to be your signpost and their trailer–which the Quad have kindly offered us as an exclusive–a peek at what awaits. Taking in its swirl of antiquated fashion, gunshots, blood smears, and screaming (so much screaming) will have you, at the very least, asking your date if a bit of German-language anarchy is in the cards.

Watch it below, with a statement from Graf following:

Classic crime films, Whodunits and stuff like that, never interested me in terms of genre cinema – only police procedurals do, cop movies. Once you decide to make these, it’s like joining an order, with its own oaths and rules, its own roads to beatification as well as the risk of eternal damnation if you fuck up as a director. Cop movies, above all, have to show how corrupted, eroded, shattered the societies we live in are – always and everywhere. What’s more, they should not claim that there’s a battle raging between Good and Evil (Dear God, let the director who wants to talk morals here burn in hell); the true cop thriller knows only Bad vs. Worse. No enlightened social agendum shall the director adhere to; instead, he must enjoy opening cans or worms, be they labeled caviar or spam – which is to say that he must relish working his way through all the conflicts ripping this world to shreds, starting his investigation at the top of the social ladder and then all the way down to the lowliest bottom-feeder. Law and order are but afterthoughts in this mess. Yet in the midst of this mayhem, you shall always chance upon some islands of sad beauty where the losers whose stories and feelings are at the genre’s heart have found shelter; it’s here that they may live and be heard, and nowhere else in cinema.

The directors featured in this series are all masters of the expressive, the outrageous, the subversive – they show how it looks and feels when the proverbial Teutonic order collapses and things go ballistic. In the 60s and 70s, Roger Fritz, Roland Klick, Wolfgang Staudte wrecked movie havoc FRG-style; ditto the actor Jürgen Goslar with his Rhodesian civil war revenge opera; as well as the ever cheery Austrian virtuoso Rolf Olsen with his vision of a very bloody Friday. Come the 80s, it’s Ralf Hüttner, Wolfgang Büld, Robert Sigl and the late Swiss craftsman supreme Carl Schenkel who continue the demolition work. That said: Few auteurs in all postwar cinema had as surprising things to show us about our nation as Sam Fuller and Zbyněk Brynych. When in the latter’s Parkplatz-Hyänen the Kommissar and his assistants duke it out with a culprit in a seedy dive by mercilessly downing one schnapps after the other while staring daggers at him till he cracks and confesses, you do get a bit of an idea what the Czech maestro must have seen in 60s Munich. D-Day survivor Sam Fuller, again, envisioned Cologne’s 1974 carnival (shot right in front of the city’s world-famous cathedral) as an emanation of all the madness raging inside the nation – bedlam; here, the thriller plot is but an excuse to dive deeply into the cesspool that is the FRG’s battered soul some 30 years after the end of WWII.

Let’s also mention that genre cinema has a very specific and unique way of showing postwar German bodies (especially when compared to the nation’s art film production); it’s here that we get to see flesh torn, scars and sutures exposed, with some men’s wounds festering away silently since maybe Stalingrad maybe Tobruk.

It’s pretty awesome for me to know that this series is playing in New York while I’m filming a new police thriller in Munich, again written by the author of Die Sieger, Der Fahnder: Nachtwache and Der Skorpion: Günter Schütter.

See the full schedule for the series on Quad’s site.