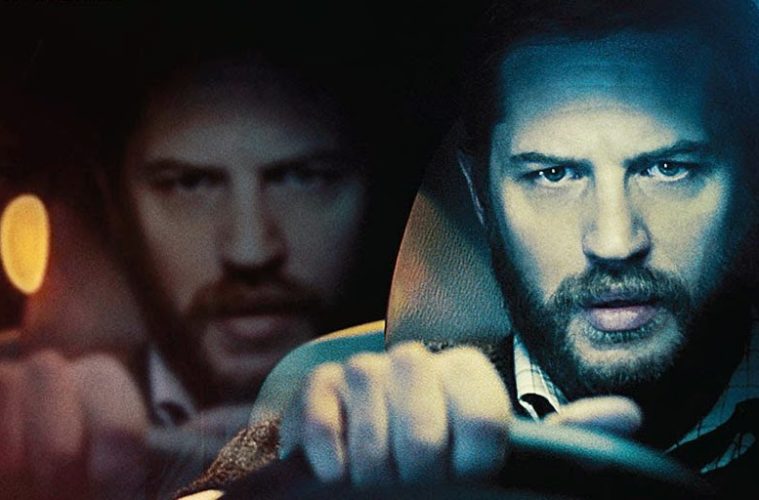 Steven Knight‘s Locke, which, after a theatrical release this past spring, is now on VOD and Blu-ray as of this week, takes place entirely inside of Tom Hardy‘s BMW SUV cruising down the motor way in London. It’s a set-up the leaves much to the imagination. Ivan Locke is a concrete expert who is literally driving away from the biggest job of his life to take care of something much more important to him. The intimacy of spending 83 minutes with Hardy’s Locke inside his car as he phones and tries to cover his bases is one of the most unique experiences I’ve had in a theater all year.

I had the chance to sit down with writer/director Steven Knight to discuss the way he went about developing and capturing this unique experience. We talked about the benefits of shooting in one location, whether he had any dropped calls, integrating the reality of shooting on a live set, blurring the line between cinema and theater, the way that reading lines can be freeing for an actor, the kind of feedback he received from test audiences, and much more. I kept spoilers out of the conversation so it should be great prep for watching the film or even afterwards.

You can check out our entire conversation below and read our previous interview with Knight during the theatrical release here.

The Film Stage: I imagine, with a contained film like this, with really one set, there are a lot of benefits and drawbacks. There has to be something about knowing exactly where you’ll be each day and the familiarity with the location. But there has to be drawbacks, as well, right?

Steven Knight: The good outweigh the bad, hugely. Because we were shooting for a very limited period, there wasn’t enough time to get sick of the location. We were still having fun. We had three cameras rolling at all times and one of them at least would be at a crazy angle. Aimed at mirrors or reflections, whatever. So there was always something interesting to cut to in any sequence. But just the control you have over the location is great. Then making the decision that you’re not going to control the environment. Whatever happens, happens, and you don’t stop. If there’s a rattle in the car, you continue. If there’s traffic, there’s traffic. Those two decisions really helped each other. Once we’re on the road, nothing can stop us. Unless the cameras broke down. And even then, if one them goes, which they often did, we still have two rolling. Know that when you say action, you’re going to shoot the whole film. There’s something buccaneering about that. All of the people involved are very, very good at their jobs of making conventional films for a living. We all sort of took a vacation from the rules and that was what was fun about it.

There are quite a few contained films out there. There’s something maniacal about pulling this off. Do you have a favorite one or even a top five?

I try not to refer to other films when I’m making films. And I don’t actually watch a lot of films, to be absolutely honest. I’ve not seen any of the single-location films. Some of them I didn’t even know existed until I made this and people would say, “Oh, it’s a bit like so and so.” This was purely the idea of having the moving background as a theater. Putting an actor into the theater and shooting a play. Trying to blur the lines between cinema and live theater. Trying to get some of that intimacy you get from a performance on a stage. I hope that when the lights go up after a screening people are engaged with the character and the story. It’s only secondary that people should say that it was made in a particular way. What this film is about is getting people to use their own imaginations. Instead of special effects and the budget giving you the imagination that you then absorb. One of the best things that some people have said after watching it is that they forget they haven’t seen the other characters. Some people have even sworn they have seen the other characters people because naturally have that ability to imagine. They hear a voice, they hear the TV in the background, they can see their house. It’s an underused thing. It’s like when you tell a kid a story, they can see in their head. Your film runs under the 90-minute mark. I believe it’s 83 minutes. For so many films, it’s a struggle to even get a film below the 110-minute mark. You’re way under that. Were there cuts even shorter than this?

There was a version that was longer where… before we started showing it to people I thought maybe people would get claustrophobic if you’re in the car all the time. So there were a lot of shot of the outside with the car driving by. From bridges and car to car. When we showed it to people they said they didn’t want that. They want to go back in the car. We want to know what happens next. By then people were engaged with the story. So that was great. That was the first clue that this was going to work. Far from being hemmed in by the location, they wanted to stay in it.

I’ve read that you had the calls a bit out of timing.

I kept it in sequence but I kept varying the gap. All the time, the cameras are rolling. So Tom never stops acting. He’s doing ordinary things as if you were driving. Just let it go. Then cue the call. So when the phone rings, it’s genuinely a shock. It’s inevitable that he’d forget. Even if you did it 10 times, you’d forget what the order was. So it’s genuine when he looks at the screen and is like, “All right, here we go.”

Dropped calls are just one of those things that happens. Were some in the middle of a take?

I thought there would be more. What I said to all the actors was that if it happens, react exactly as you would if it happened for real. It happened very rarely. Probably only three or four occasions, which is very unlike a cell phone to be so efficient. But it helped with the rhythm. Everybody got confident. If it had happened too much, people would start to just lose faith in the whole concept.

It seems like you all embraced the real life aspects of shooting the film. Tom Hardy was sick on set and you just rolled it into the script. I thought that was brilliant because I’m sitting there, as a film critic, wondering why the decision was made to make him sick. You don’t ever explain it. He’s not ever apologizing for it. To read that, afterwards, it’s brilliant.

Afterwards people have said that they thought the medicine would make him drowsy and he’d swerve off the road. But when you watch a film, we’re all so literate in film that we know what to expect. I think it’s great when you break the rules. You give people stuff that they think, “Ah ha” but that never happens.

Tom was very particular about the voice he used for this film. Audio is such a huge part of this. Do you even have a traditional casting process for the people that are going to call in or do you say, “Okay, I want you to go into this room, where I can’t see you, and call in and read some lines”?

We did five days of readings with the whole cast together. The people are not necessarily household names here, but they’re the best actors. All of our first choices said yes, which is incredible. It helps that it’s only eight days of their life that we’re looking for instead of eight weeks. So we read around the table and dealt with the issues of direction, character, background. All of those things there. That meant when we set off on the road people knew pretty much what to do. They could calibrate their own performance throughout because they were doing it for real. They have the script and Tom has the script in front of him, on the teleprompter. The words are there but that means they’re completely free to do whatever they think in terms of performance.

That has to be freeing for you as a director because you get to focus on the minutiae.

Exactly. There’s something very realistic about it. I think it’s because… the process of having an unscripted conversation, it comes somewhere first and then you say it. But it’s a split second delay. You think it and then you say it. Sight reading is similar to that. I know a lot of actors now, they use ear pieces and they have someone read the words. They say it makes it just like thinking. So maybe that’s what it is but the way Tom does it is just so incredible.

Can you talk about the response you got — or hoped you’d get?

Well, with this, I’m really glad that it isn’t being viewed as an art house experiment. The person at the center of it is an ordinary man. The things that happen are ordinary. There’s no attempt to baffle the audience in order to impress them. It’s to make everything clear. For it all to be very solid except for the fact that we’re dealing with subjects that don’t normally get dealt with and filming it in a different way. But what’s been really gratifying for me is the box office in the U.K. and in New York and LA so far. People are going to see it and they’re going to see it on the strength of word of mouth. People are coming out of the theater and talking to other people about it. I’m not one of those people who is contemptuous of popularity. I mean, I worked in commercial television for years. If you’re going to do something, you’ve got to do it so that people want to see it. So called ordinary people aren’t idiots. The audience aren’t idiots. If you make some really obscure piece of self-indulgent art they’re not going to want to watch. I’m really keen that this isn’t that. I know that the people who have had the most profound reaction to it have been working men, middle-aged, with kids. They’re far from being the art house crowd. I’m really pleased about that.

Locke is now available on Blu-ray.