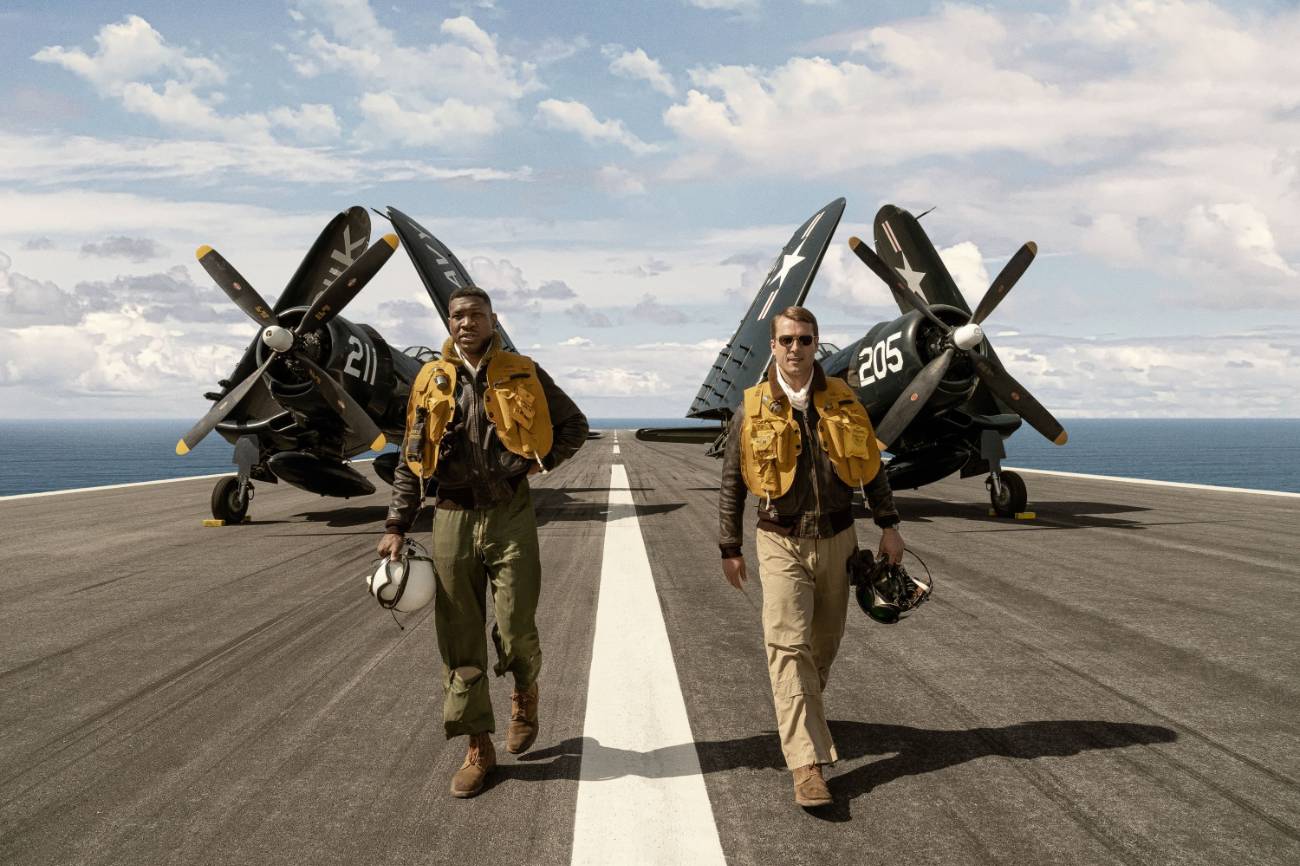 Devotion adheres to the true story of Jesse Brown, the first Black Naval aviator. It’s a name many will be hearing for the first time. Adapted from a 2014 novel, director J.D. Dillard’s film doesn’t bear the trappings of that other aviation blockbuster from 2022. It doesn’t have a storybook structure. The built narrative struggles against the facts of its plot, unable to find rhythm in a fictionalized version of events. But none of it matters—Brown remains a remarkable figure, a complicated character to study, and impossible not to root for.

Playing Brown is Jonathan Majors, an actor who’s seemed to make every project better in his young career, whose rising stock brings an extra layer to this performance. His fame skyrocketed off the heels of his introduction into the Marvel universe, though he’s a much bigger hero in Devotion: he brings a groundedness, an emotional intensity, and a theatrical cadence in the midst of a sometimes shoot-em-up story.

Opposite Majors is Glen Powell in this year’s second role as a pilot. Powell portrays Tom Hudner, a wingman and close friend to Brown. His signature winning smile splashes across the screen in every scene, and the rapport with Majors becomes evident quickly. Powell and Majors seem to genuinely have a good time together, an amount of love and respect clear from the jump. He’s solid, as always, and resonates a smoothness alongside the star with a more psychological, taxing role.

Devotion will likely be compared to Top Gun: Maverick, though the two action-dramas have a drastically different third act. Both boast strong action sequences, spending large portions of their back-halves in the air. And like Top Gun, Dillard’s film looks beautiful as these planes soar through the skies. Using a series of aerial shots, Dillard attempts to put the viewer into the cockpit, into the intensity of flying at extreme speeds, into the pressure of even landing one of these on a ship. That becomes the difference between the two films: these pilots are just hoping to land these planes and survive; they aren’t pulling death-defying feats to simply show off, but rather return home in one piece.

Unfortunately, Devotion follows the factual series of events. For Dillard this story was personal: his father was actually the second Black pilot for the Blue Angels, a trailblazer in his own right. So he sticks to history, making for too-soon emotional highs, abrupt tonal shifts, and a level of narrative incompletion. Sometimes, sadly, the audience wants a different ending, even if it’s not accurate. Dillard deserves admiration for continuing with a non-climactic ending—that’s life, though. It stakes his film firmly in reality, in the unlucky, often ill-fated endings of our heroes.

An interesting supporting cast surrounds Majors and Powell. From Joe Jonas and Thomas Sadoski as pilot and trainer, respectively, to Serinda Swan as a very fun Elizabeth Taylor, the cast tries their best to fill in minor gaps left by the two stars. Some are more successful than others—Swan’s bit part injects energy and comedy into a dark script.

That character also finds the pilots in Cannes, a moment of breath amongst malaise mixed with danger. She leads Majors and Powell into one of Devotion‘s better scenes: a naturalistic look at two friends while their status as pilots takes a back seat. It shows one of the script’s strengths, and its necessity in focusing on Brown—as his path always endures, the rest of it occasionally feels like excess.

Devotion is now in theaters.